Troubled but evolving microconsole Ouya is rolling out to Target stores nationwide this month with plans for demo kiosks for early next year, Ouya founder Julie Uhrman tells Polygon.

"What is the most exciting is how we've been embraced by retail," Uhrman said in a recent meeting. "When we launched in June we were live in the U.S., Canada and the U.K. We launched with GameStop, Target, Best Buy and GAME. This month we are going full chain with Target."

The distinction is that up until now Ouya was only available at some of the stores of the retailers that sold the console. Because no chain had committed to sell the console at all of its locations, the console maker was reluctant to do national marketing. That changes with Target's decision to carry the console at all 1,800 of its stores.

"That allows us to do national campaigns and have a national footprint," Uhrman said.

With the expansion to all Target stores, Ouya is also redesigning the console's box art to "highlight and promote more games and new content."

The Target news comes as Ouya expands its international availability, opening sales for the console in Western Europe, including France, Italy, Germany, Spain, and the Middle East at the end of the month, Uhrman said.

Starting next month, Target will begin promoting the console through an in-store video trailer in its electronics department and an in-store promotion for a $10 game card with the purchase of the console. In December, Target will put in customized Ouya shelf displays and advertise the device in its circular. 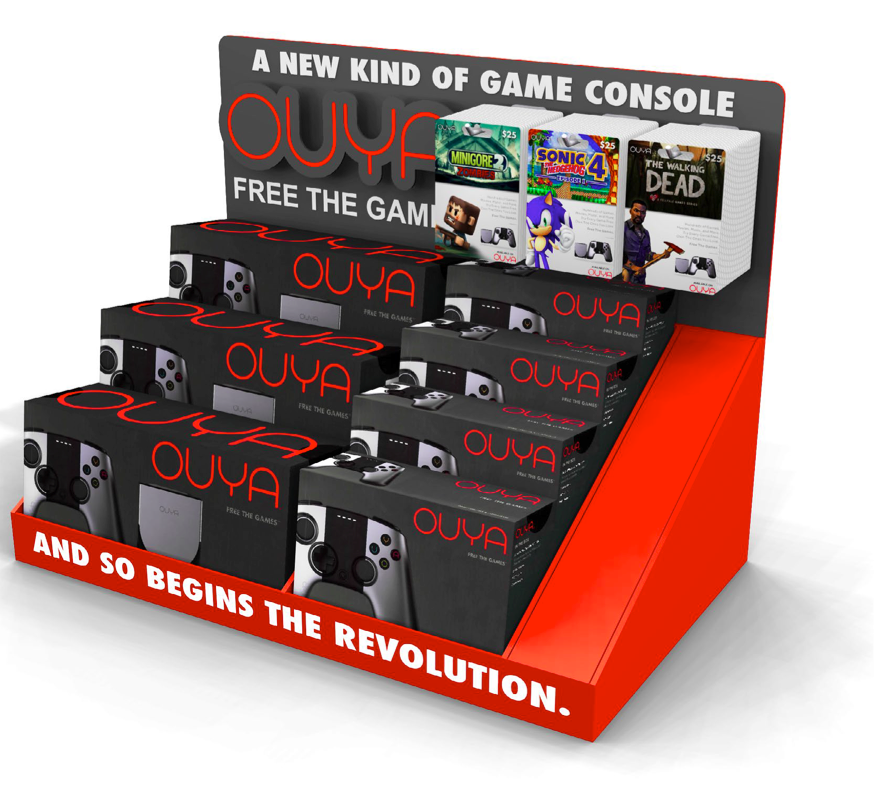 The plan is to start rolling out demo kiosks to select stores early next year.

"We have been building out demo stations," Uhrman said. "The reality is they are incredibly expensive and you have to man them."

Ouya also had to design a wired version of its controller specifically for the kiosks, she said. If the kiosks prove effective, the company will increase the number of kiosks it sends out to stores. Games being considered for the demo stations include TowerFall, Clark and Fist of Awesome, she said.

Target's decision to expand its sales of Ouya to all stores was driven by customer demand, Uhrman said, adding that Ouya reps are currently in talks with Wal-Mart about getting the console in its stores.

"I would expect something, us to announce something with them soon," she said.

"It's a lot of stores," she said. "We're still being really thoughtful about the number of units per a store for retailer because we want to make sure for every customer that wants an Ouya they can get it, but we also don't want to overstock."

There's also the issue of Ouya's approach to development.

The console continues to "iterate" and Uhrman said she wants to make sure whatever is on store shelves is the newest product available on the market.

Ouya has garnered a lot of attention both for its tremendous Kickstarter success and the backlash of consumer disappointment with the system's controller, early game library and online issues. The company also ran into some issues with its Free the Games Fund promotion after a couple of funded games drew suspicious crowdfunding.

In our interview, Uhrman acknowledged that Ouya had made a number of missteps since its launch, but said the company has worked through many of those problems and continues to work to perfect its system.

"There were some absolutely unacceptable things that we just didn't, we didn't see regardless of the amount of testing we'd done," she said. "But we haven't had a software outage. We haven't had a major bug that made the system unplayable. We haven't had it accidentally release credit card information.

"For a company that is less than 35 people that went from an idea to a full product in less than nine months and four months after launch is nearing 500 games with 25,000 developers, I think our successes far outweigh our misses. And yet that's what people want to talk about, but that's also what we want to focus on because that's what makes us better as we listen, iterate and use it to make the product better."