Share All sharing options for: Ryse: Son of Rome webseries teased by Microsoft

A webseries based on Ryse: Son of Rome, the upcoming Xbox One title from developer Crytek, appears to be in the works according to an imagine teased on the official Xbox product page for the game.

The teaser advertisement states the new webseries is "coming soon" and will feature a mature rating for intense violence and sexual content.

Polygon has contacted Microsoft for more information and will update when further details are available. 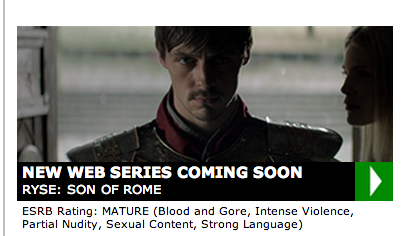