For fans, the WWE canon borders on a religion, but for newcomers it's impenetrable. WWE 2K14, the first in the annual series to be published by 2K, is a fine wrestling game and an excellent management simulator. But it's truly at its best as a comprehensive and accessible historical reenactment of the most essential moments in wrestling history.

WWE 2K14's developer, the Osaka-based Yuke's, has been digitizing wrestling's heels and heroes since 1999. The team grokked the WWE's fighting aspect early on. But the latest entry displays an obsessive fascination with the drama: how the story unfolds before, after and sometimes during the WWE's biggest bouts.

At the muscular core of WWE 2K14 is a historical recreation of the first 30 years of WrestleMania. Essentially the Super Bowl of Spandex, WrestleMania is a pay-per-view event where the year's worth of dramatic WWE storylines crescendo into a cacophony of gut punches and body slams.

The digitized models are citizens of the uncanny valley 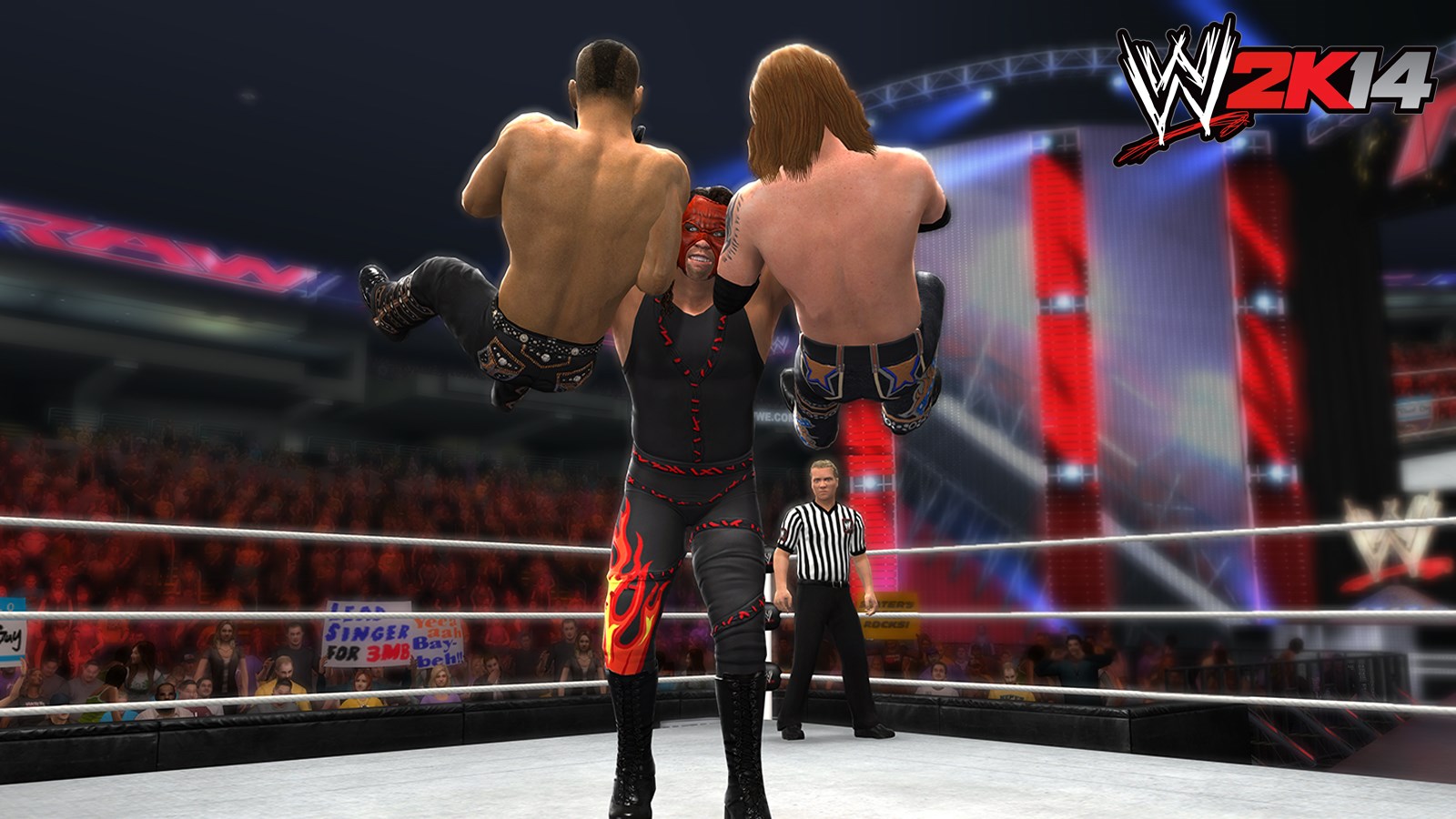 In the case of exhibition modes, the characters are merely punchers and punching bags to be plopped in a collection of match types. The variations allow for the number of fights, rules and ring modifications to be mixed-and-matched, letting you tenderize the flesh bags with abandon. These modes — along with an operable online mode — are fun, but hardly make the best use of roster when compared to the WrestleMania mode or an Undertaker mode that lets the player replicate, best or impede his historic win streak.

Wrestlers have their own unique set of moves, but generally handle just like the other members of their weight class. Learn one, and you'll have learned them all. Female characters are included, but they most often play a role at the ring's edge. In matches, they feel underdeveloped — tagged on simply because they intended to include every aspect of pro-wrestling. In a way, the game treats its female cast with as much apathy (if not derision) as the actual WWE.

Exhibition matches are fine with friends, who will bring their own enthusiasm and competition, but each match alone feels more redundant that the last.

These fights drive WWE 2K14's various modes. Two or sometimes more wrestlers meet in the ring — often accompanied by managers waiting by the ropes — to brawl for dominance. There's a button for strikes, a button for grapples, one for slinging an opponent across the ring and another for reversing an attack. The basics are quick to learn; however, those basic moves can be modified with a flick of the joystick or the tap of an extra button, lending an additional layer of complexity to those who seek it. This is what simple fighting mechanics look like after nearly a decade-and-a-half of polish. And all that time with the WWE has lent Yuke's a fervent appreciation of its subjects.

The reverence WWE 2K14's creators show to both the sport and the men who gave their life to it — quite literally in some cases — is infectious. WWE 2K14's focus is always on the wrestlers. Their digitized models are citizens of the uncanny valley — their eyes roll in their sockets like loose cue balls — but they do an unexpectedly excellent job of emoting. These human-sized dolls are cartoonishly expressive: Injured legs wobble, hands nervously fidget, mouths torque and clinch in pain. Like a B-movie, watching what's on screen is hardly beautiful, but it's entertaining. When I close my eyes, I can still see virtual Hulk Hogan trapped in a leg lock, his eyes and tongue floating an inch from his face. I will cherish that for weeks to come. 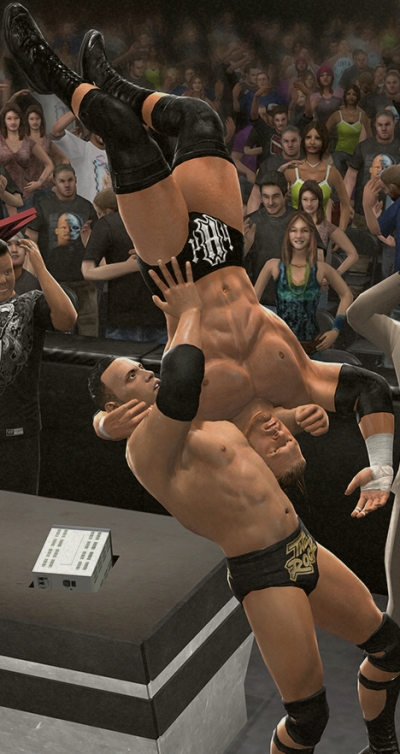 The game includes plenty more intentionally comical scenes. Pro-wrestling is as much performance as it is sport, and WWE 2K14 allows for plenty of showboating, if you wish to learn and practice. Silly details are given serious attention. WrestleManias from the '80s feature film grain and retro television fonts that call to mind Wide World of Sports. The simplicity of these early bouts — before cage matches and ruleless blood baths — makes for a gradual introduction to the controls, like a non-insulting tutorial. I appreciated having the complexities explained only once I needed to know them, rather than in a wall of ignorable text.

The developers really embrace the inherent theatricality of pro-wrestling. Where most sports have their story lines crafted by journalists and television programs, pro-wrestling has the benefit of employing professional writers. The skill of what those storytellers have done for the past three decades is evident in the pre-match text that recaps the previous year's trials and tribulations, injecting delicious context into what would have been otherwise flavorless matches. In WrestleMania matches, the player is rewarded unlockable costumes, characters and settings for following an on-screen script — land this move, escape this pin, so on. This doesn't just emulate watching pro-wrestling; it's about being a pro-wrestler: carefully choosing moves, purposefully taking hits and creating a pre-determined scene.

WrestleMania Moments, quick-time events that are triggered by the artificial intelligence, are the unfortunate hitch. Speckled through most scripts, they require the player to stop watching the match and start watching the button prompts, extinguishing excitement faster than a botched finisher.

When I close my eyes, I can still see virtual Hulk Hogan trapped in a leg lock, his eyes and tongue floating an inch from his face

For players that want more control, WWE 2K14 also offers an excellent Executive Producer simulator. Thanks to a suite of customization tools and the WWE Universe mode, the player can customize everything from the top level (rivalries, weekly match-ups, pay-per-view bouts) to the bottom level (crowd types, camera filters, stage design). You can create a custom character and edit the width of his shoulders, the flashiness of his threads and even the name on his social media account. Cower before the power of Executive.

With WWE 2K14, Yuke's is pressing in from both sides: the moment-to-moment crude violence and the year-to-year elaborate planning. You get the sense that they're just about to create the video game industry's first quintessential soap opera, and they're that much closer to capturing the heart of pro-wrestling's drama.