Ubisoft relying on community for The Mighty Quest for Epic Loot, and it's working

Share All sharing options for: Ubisoft relying on community for The Mighty Quest for Epic Loot, and it's working

With The Mighty Quest for Epic Loot, Ubisoft Montreal is building a free-to-play framework for a tower defense/action RPG hybrid, and looking for players to fill it with content they create. Betting on a large, creative user base may seem like a risky proposition, especially considering how toxic people can be online.

Luckily for the studio, the community of players in Mighty Quest's closed beta are not only building plenty of castles to raid — they're also helping each other out in order to improve the experience for everybody involved.

The Mighty Quest for Epic Loot asks users to build castles and turn them into impenetrable fortresses by setting up deadly defenses. Other players then attempt to breach the castle and survive the enemies and traps within so they can make off with the cache of loot inside. The idea of pitting tower defense against Diablo-inspired dungeon crawling is a simple enough conceit that you wonder why nobody has tried it before. The twist of having users handle both sides of the equation makes Mighty Quest particularly unique, and those users are coming through in more ways than one.

"The community is very posi in this game," said Matt Zagurak, the game's lead writer, in an interview with Polygon last week.

"Like, 'Oh, you know, here, I just had some thoughts on how your castle could be cooler'"

He added that because most people are playing through user-created castles, players have a "vested interest in being helpful to each other" — and for the most part, that's what they're doing. During our hands-on demo, Zagurak clicked on a user-built castle and checked out its reviews; Mighty Quest's user ratings are one way in which Ubisoft Montreal is surfacing the best content.

"This guy here, he's just giving constructive criticism about the castle," Zagurak explained. "Like, 'Oh, you know, here, I just had some thoughts on how your castle could be cooler.' That's very interesting, and you see that a lot."

Ubisoft Montreal is providing some of their own castles as models for players who are just starting out. But according to Zagurak, the people in Mighty Quest's closed beta — hundreds of thousands of users so far — are already exhibiting more creativity than the developers anticipated.

Zagurak gave the example of a chicken that players can use as a first line of defense, a creature that the developers intended as a simple fodder enemy. Creators started filling their entire castles with nothing but chickens, challenging players to hack through an entire flock. The studio eventually built a weeklong challenge around killing chickens, and is looking into ways to encourage and incentivize that kind of fun, emergent gameplay.

Editor markup for The Mighty Quest for Epic Loot gameplay screenshots. This is only visible in the story editor.

Mighty Quest currently consists only of this build-a-castle-and-others-attack-it mode, which was a design decision that the developers made early on in the process.

"The asynchronous thing was kind of the type of game that we wanted to make, which was one where you can come back to it several times throughout the day for short play sessions. Kind of like you would check your Facebook or something, or check your email," said Zagurak. Castles are generally designed to be able to be completed in three to five minutes, so players can easily jump in and out of the game and get a few rounds in. But since Ubisoft Montreal is still in active development on Mighty Quest, the studio is exploring adding real-time elements.

"Having at least the opportunity to — without fundamentally changing what the game is about — to increase the sense of, if I'm online and you're online, giving us more things to do together, is something that's being looked at right now," said Zagurak.

As lead writer, Zagurak helped establish the tone of Mighty Quest, which is decidedly a more lighthearted game than most of the titles that come out of the fantasy genre.

"There's a lot of dark fantasy out there in games, and just in media in general — a lot of knights and archers in worlds that are extremely serious, extremely foreboding and menacing," said Zagurak. "It just felt a lot fresher to us to take a game that had that sort of gameplay and that sort of universe and make it light and funny and not so serious."

"I wouldn't say that the game is inherently satirical"

With a title like The Mighty Quest for Epic Loot, you might think the developers are parodying conventions of the role-playing genre. Instead, Ubisoft Montreal is aiming at a real-life target.

"The main send-up that takes place in the game and in its tone is not one of video games, per se — I mean, there [are] some winks and nods to that here and there — but it's more of a take on the notion of conspicuous consumption, and of the pursuit of wealth in general," Zagurak explained.

Mighty Quest takes place in a world called Opulencia — or, to be precise, above the world: After overdeveloping their kingdom straight into a real estate crisis, the Opulencian nobles used magic to levitate their castles into the sky. It's a more serious-sounding setup than the trailers make it seem, but the developers are playing it for humor rather than attacking modern society.

"I wouldn't say that the game is inherently satirical," said Zagurak. "That stuff is there if you want to look for it, but it's not fundamental to the game experience by any means." 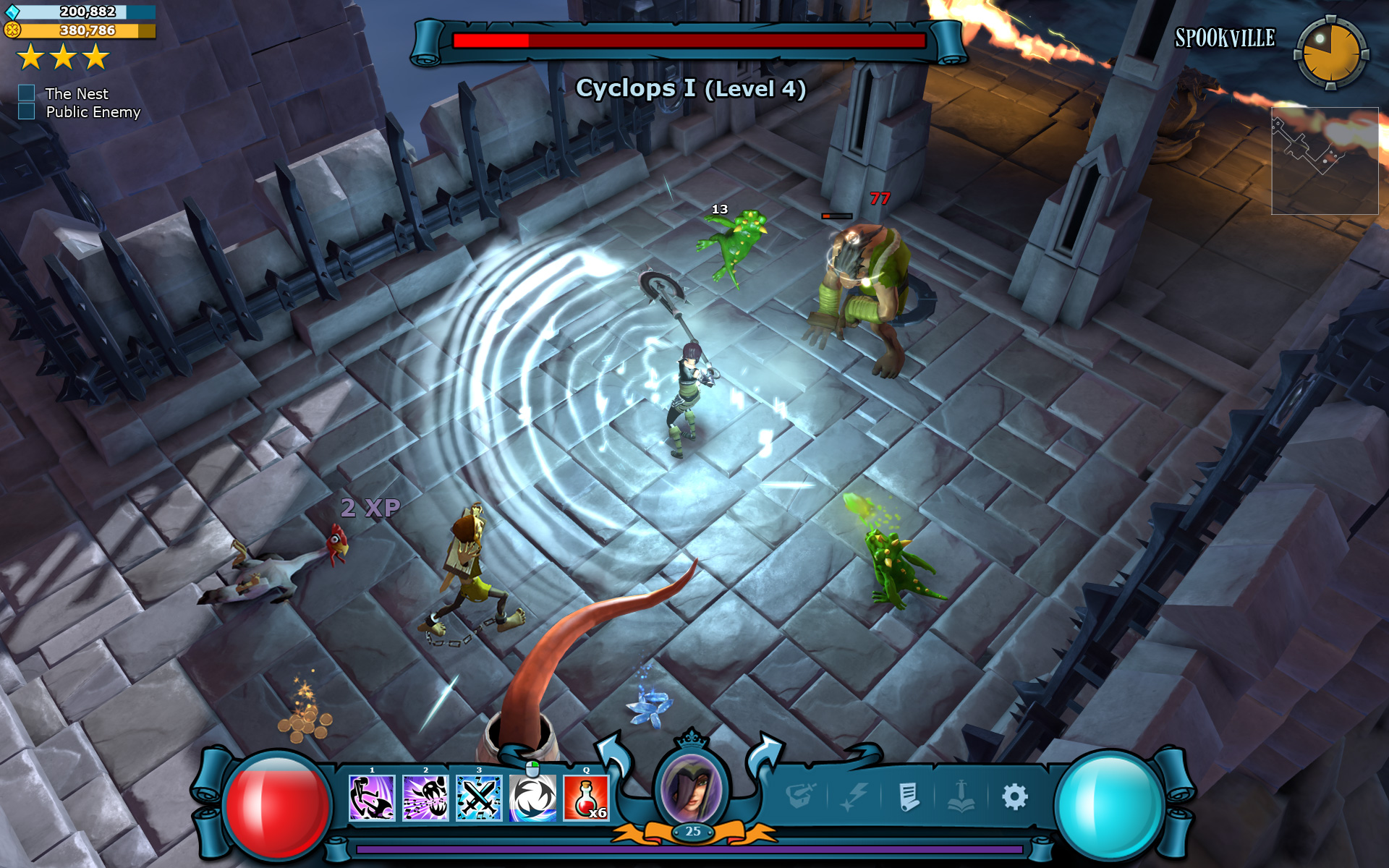 What is fundamental is that Mighty Quest is a free-to-play game, with monetization focused around three pillars: time saving, convenience and customization. Zagurak noted that there aren't any "pay-to-win" items available to users, and that the developers are testing different microtransactions to figure out what the community will and won't tolerate. According to Zagurak, that's one of the reasons why the beta has been so useful.

Since users can spend money in the closed beta, they're directly contributing to the development of Mighty Quest by playing it, in addition to continually supporting the game by building content for each other. Ubisoft Montreal is currently planning to launch an open beta before the end of the year, and will figure out timing for a final release based on how the open beta goes. If the studio can grow the player base and increase the amount of castles that players build while maintaining a positive attitude among the community, it could have something special on its hands.