Since 2009, Assassin's Creed has been an annualized franchise, though Ubisoft has tried to ease series fatigue with major changes from game to game. Assassin's Creed: Brotherhood introduced the well-received ability to recruit and lead an order of assassins; Revelations and Assassin's Creed 3 added less successful strategy and homestead elements, respectively.

Black Flag takes the ship combat of Assassin's Creed 3 and builds it into a true open world, a first for the series. And it's the most successful collection of mechanics the series has seen in years.

But the narrative and character strength that held previous Assassin's Creed titles together — the overarching themes and ideas that have defined the series — are weaker than they've ever been. Even as Assassin’s Creed 4: Black Flag finds solid footing in the way it plays, it feels a little ... adrift.

Assassin's Creed 4 stars Edward Kenway, a pirate in the turn-of-the-18th-century Caribbean. Edward is shipwrecked and soon drawn into the conflict between the authoritarian and power-hungry Templars and their enemies the Assassins.

This was difficult to reconcile amid some cleaned-up basic mechanics. Combat is more or less the same, emphasizing a system of parries, counters and instant kills, and Edward still free-runs like his ancestors and descendants. However, many of the traversal problems that hung over Assassin's Creed 3 are gone. 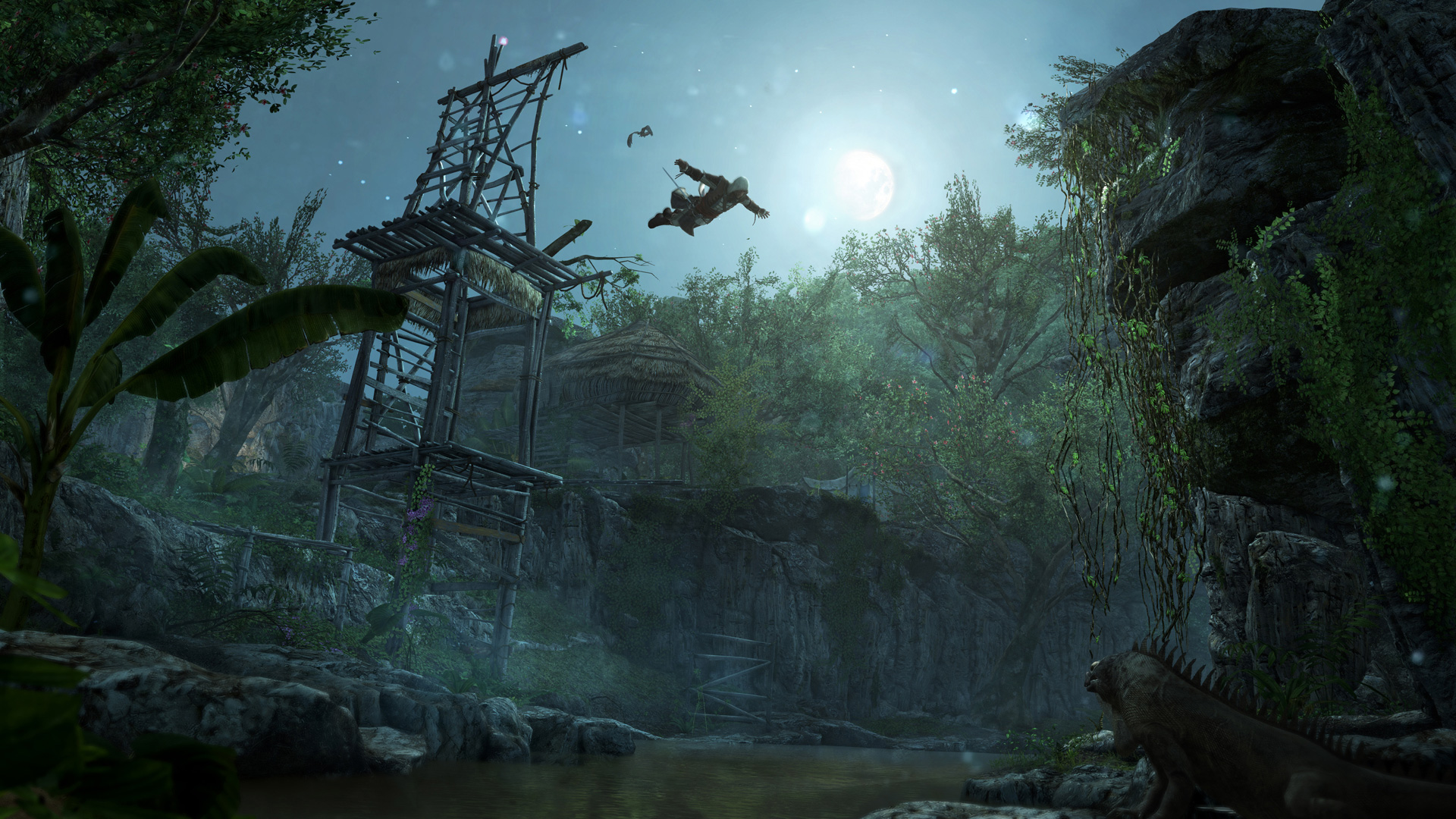 Players who wait a couple of weeks to pick up Assassin's Creed 4 on next-gen systems have a more attractive game waiting for them, but current-gen players aren't getting shafted. Black Flag is the same game on every platform and plays essentially the same. The mechanical differences only manifest in moments on current-generation consoles where the game has difficulty maintaining a consistent frame rate, which occasionally made certain twitch-based bits more difficult on Xbox 360 and PlayStation 3.

Visually, it's a somewhat different story. The game looks basically the same, but PlayStation 4 (and in all likelihood, Xbox One) players are getting a more sophisticated presentation at 1080p. The visual upgrade is most apparent in characters' faces and in Black Flag's oceans, which seem to have a small but appreciable amount of additional depth over their current-gen counterparts. Other minor details grew more apparent over time, like much more elaborate foliage and much sharper textures.

Current-gen players do have one minor advantage: Load times seemed to be very slightly faster on the Xbox 360 build I played than the PS4 version.

I gritted my teeth navigating the busy geometry of ships — Edward doesn't seem cut out for the traversal demands of dozens of ropes and beams and platforms crisscrossing one another, and I found it frustratingly easy to get lost, for lack of a better way to put it. But towns and cities in Assassin's Creed 4 have few of those problems. Ubisoft has restored some of the extensive verticality and climbing challenges the series made its name on, and though there's often little story reason to engage in city-wide free-running excursions, exploration is incentivized in Assassin's Creed 4's move to a more open-world structure than its predecessors.

The activities Assassin's Creed 4 offers are integrated into the main game in a more sophisticated way than in previous installments. Hunting returns from Assassin's Creed 3, but borrowing a page from last year's Far Cry 3, there's a more practical incentive to chase after wild deer, or later, to hunt an elusive white whale: crafting. Most of Edward's personal protection and capacity is improved using materials harvested from the animals he hunts.

Money, meanwhile, is good for buying new pairs of swords or pistols, and for upgrading his ship, the Jackdaw, in tandem with wood, cloth and metal. The cities of Assassin's Creed 4 are still dotted with sync points, tall structures that allow Edward to survey the world and identify quests, targets and more. But Ubisoft has also made these spots Assassin's Creed 4's fast-travel beacons, ditching the broken, point-to-point sewer systems of previous games.

It's difficult to underscore just how much more convenient this makes Assassin's Creed 4 to play at a basic, functional level compared to other games in the series. And it's a necessity in light of the game's scope.

As a pirate captain, Edward can board his ship, the Jackdaw, and sail more or less unimpeded around the world, discovering new harbors, new islands and new secrets. The only thing that can really keep you from going where you want are practical pirate concerns — storms and other ships. Over time you'll earn resources to upgrade the Jackdaw, but there are almost always bigger, badder opponents out there. This effectively gates parts of Assassin's Creed 4's world until later in the game, but it contributes to a welcome sense of organic progression. It's rare that I encountered a load screen on open water, as the game only stopped when I entered a large city or began a new story sequence.

This change makes the best part of Assassin's Creed 3 — the sailing and ship-to-ship combat — much better. Out on the ocean, Assassin's Creed 4 is unlike any game I've ever played. Even the basic act of sailing the Jackdaw was gratifying as I called out commands to my crew, adjusting sails and angle to head off storms or enemy fleets, or shouting for full sail to ram an unsuspecting merchant ship. Angling to keep ahead of a frigate while setting up to broadside them with a full complement of cannon fire was fun every single time — despite how temperamental Assassin's Creed 4's sea can be. 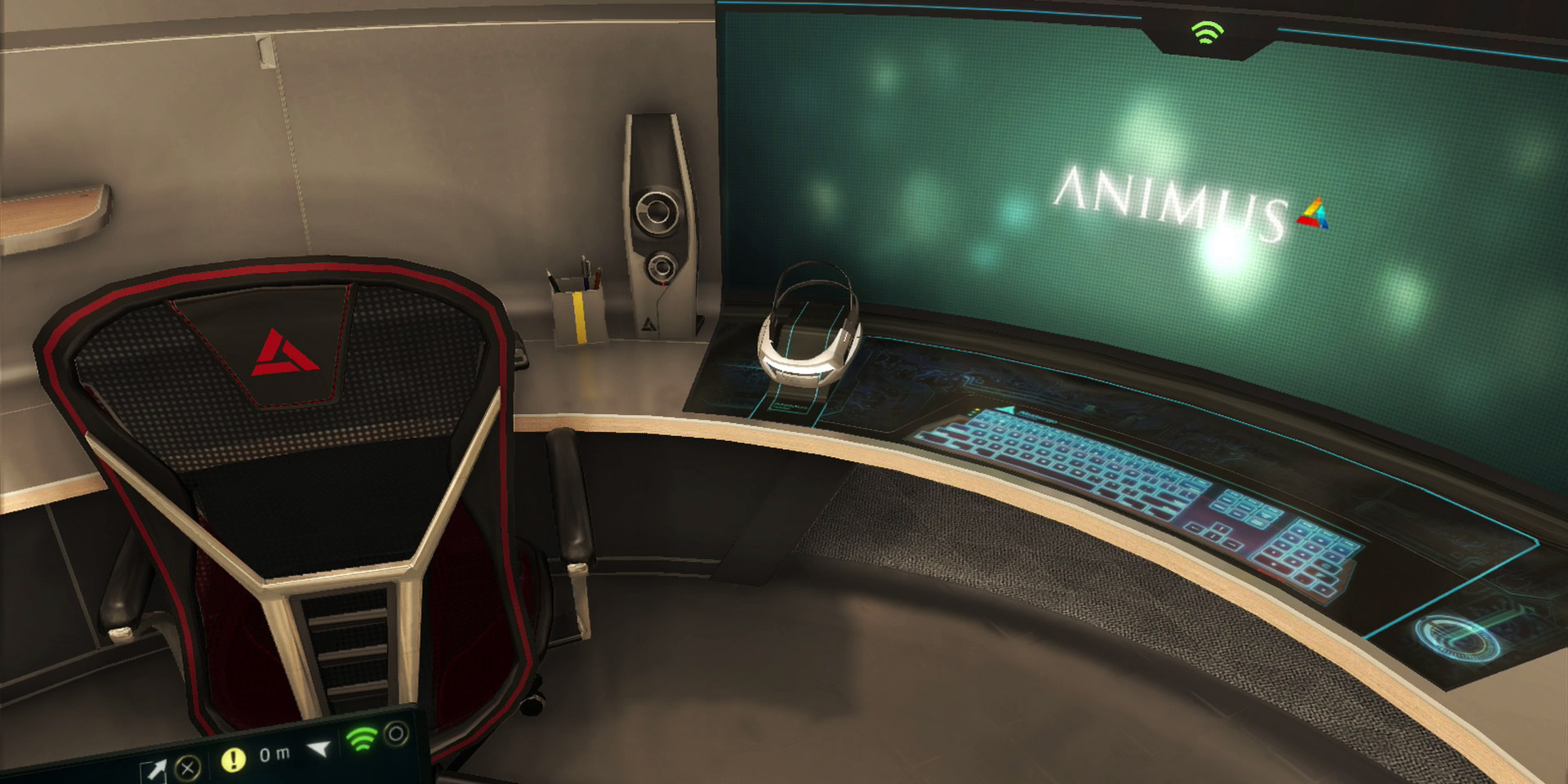 As with every Assassin's Creed game prior, Black Flag takes place within the Animus machine's virtual reality and outside of it — despite major plot points from the last game that complicate the matter. Set within the game development offices of the Templar-controlled Abstergo, these first-person sections do the legwork of justifying how the series can continue. They also introduce some of the most bizarre meta-narrative I've seen in a game.

In the Assassin's Creed universe, the Assassin's Creed games actually exist as products created by Abstergo. In a more interesting development, the conspiracy Black Flag follows in the "real" world details a game studio racked with paranoia and the quest for the next big thing, beholden to arbitrary human resource policies and long hours.

While the hacking and investigation that occurs there seems geared toward introducing new interests and potential factions to the series' fiction — and tying Assassin's Creed 4 to the previous games in a way the main component is wholly disinterested in — I almost wondered if it was really a hidden-in-plain-sight cry for help from the developers.

Continuing a sort of Assassin's Creed tradition, AC4 shifts between "no problem" to "no margin for error." On land, there's little likelihood of failure or death for most of the game, and my retries were motivated by a desire to do something as intended, to favor stealth over bloody direct engagement. In the water, a wrong move or off calculation in my capability often led to a scuttled Jackdaw and an unhealthily clenched jaw.

Ironically, it was small annoyances like this that reminded me that I was playing an Assassin's Creed game at all. Aside from the brief moments outside the Animus VR construct in which Assassin's Creed 4 takes place, the moments that best defined the game for me existed separately from the series that came to define Ubisoft this console generation.

Assassin's Creed: Revelations and even Assassin's Creed 3 had mechanical elements that felt tacked on and out of place, but the cores of those games were tied into the ideas of the series — stalking targets, gathering intelligence and acting as part of the cause. Edward's actions for the Assassins are begrudging or opportunistic, and until the end of the game, feel like a distraction.

Ironically, the place where Black Flag felt most like an Assassin's Creed game was in its multiplayer. It's largely unchanged from previous entries, shy of some new quirks to its co-op Wolf Pack mode. But it reminded me of when the series was actually about assassination.

This was my biggest problem with Assassin's Creed 4. For all of its mechanical improvements; for the wonder I felt as I sailed the ocean, with orca, dolphins, even great whites breaking the surface to my port side as I outran a royal trade armada; for the excellent performances and character moments throughout ... it felt disjointed. Directionless. Black Flag, like its protagonist, is constantly waiting for its dare-to-be-great moment.

Assassin's Creed 4 was reviewed on a PS4 development kit at Ubisoft's San Francisco offices over four days. Pre-release versions of the Xbox 360 and PS3 releases were also tested. You can find additional information about Polygon's ethics policy here.