A new way for mobile game devs to learn from players

Share All sharing options for: A new way for mobile game devs to learn from players

Mobile analytics software developer Mixpanel announced Mixpanel Survey today, a tool that mobile game developers can use to get targeted and direct feedback from players.

According to Mixpanel's Nicole Leverich, existing tools allow developers to track when players start and finish playing, how long they spend in a game, when and where they're spending money and which levels of a game they play the most. But these tools don't explain why players are performing these actions. Mixpanel Surveys integrates itself into the native app and appears when the developer sends out a survey to specific groups. For example, if a developer notices that an overwhelming number of players quit after the third level of a game, it can target those players specifically and send them a survey to complete about that particular level. Instead of guessing what is causing those players to quit, it can ask them if the level is too difficult, what they don't like about it and what they find most frustrating.

" ...We're able to send out surveys that are relevant."

"The fact that we have this level of targeting makes a difference," Leverich told Polygon. "If you think of a lot of the pop-up surveys you get on Facebook or Yahoo Mail, they're very generic. They're not relevant to what you're doing at that moment or how you use a product. We built targeting into Mixpanel Surveys, so we're able to send out surveys that are relevant."

The tool allows developers to filter players by different criteria, from their city and country to the levels they play the most to the weapons they use in their games to the number of hours played. Developers can make their surveys multiple choice or ask players to input text. One example she gave was if lots of players in a game are spending money on an in-game sword and not the axe, the developer can ask those players why they like one more than the other.

Leverich says that because Mixpanel Surveys is part of the native mobile app, it is much less intrusive than traditional surveys. It won't take players out of the game. Instead, it appears in the app and draws on the dominant colors of the app itself so the survey isn't visually intrusive.

Using the tool, Leverich said developers can identify and, mostly importantly, understand what works and what doesn't. It takes some of the trial and error out of improving a game and lets developers collect more detailed feedback from players.

Mixpanel Surveys is currently available for iPhone apps. It will be expanding to Android and iPad apps in the near future. 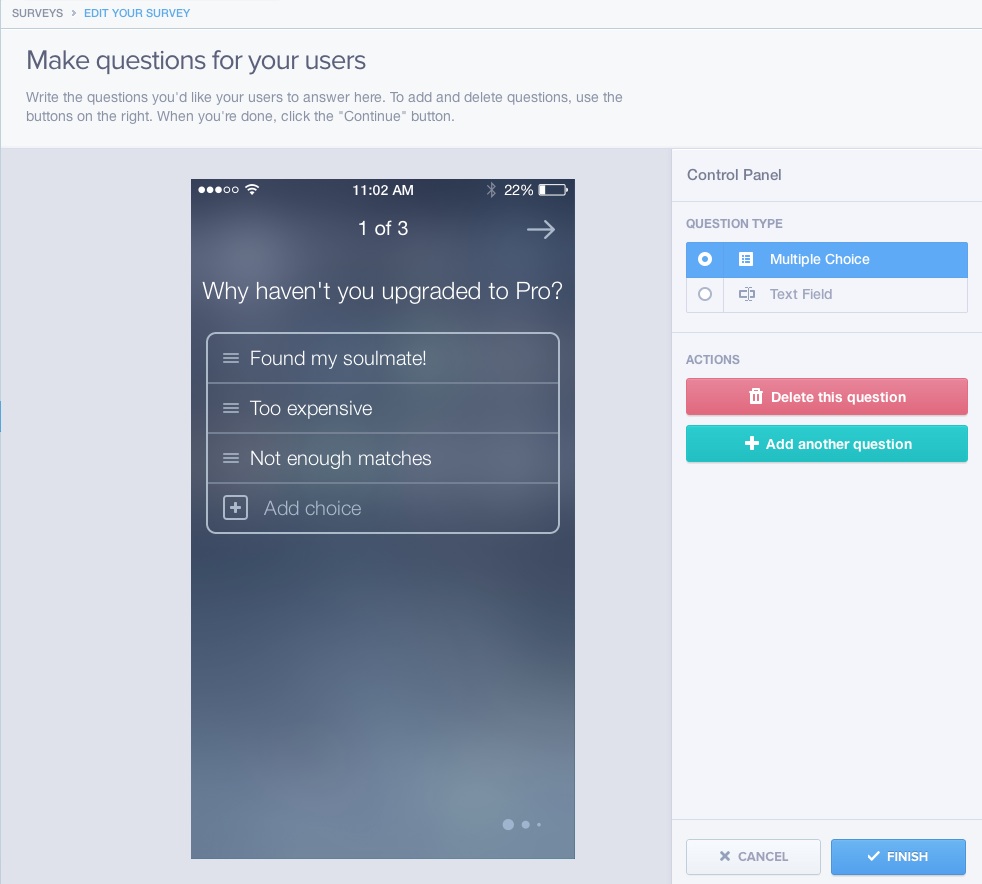