DualShock 4: Hands-on with the best Sony controller yet

Share All sharing options for: DualShock 4: Hands-on with the best Sony controller yet

There's no need to mince words: The DualShock 4 feels great.

The two controllers we bought from Amazon and GameStop are larger without being unwieldy, heavier without being uncomfortable and balanced to feel at home in your hands. Everyone who's held the controller in their hands over the last few days at Polygon's New York headquarters thinks Sony got the PlayStation 4's controller right.

Sony settled a design for the PlayStation Controller in 1994. Not much has changed from the PSOne controller's basic design the nearly 20 years since Sony entered the video game market. When it came time to introduce analog sticks to PlayStation controllers, Sony retrofitted those onto the original design. Both the Dual Analog Controller and its rumbling successor, the DualShock, were built from that same basic design.

Sony released the Sixaxis alongside the PS3 in 2006, back when there was an awkward lawsuit about rumbling controllers and Sony believed that motion controls were the next big thing in console gaming. It had an accelerator and a gyroscope and, weighing in at 4.8 ounces, almost no weight. Which makes sense, if the way Sony thought you were going to use the Sixaxis was flinging it around.

By 2008, Sony released the DualShock 3. It retained the Sixaxis' motion functionality, but the big news was that rumble was back. Its weight also increased to 6.0 ounces.

Next up, we have the PlayStation 4's DualShock 4, which weighs in at 7.5 ounces. (For comparison, an Xbox 360 controller with 2 AA batteries weighs 9.35 ounces, while an iPhone 5S weighs 4 ounces.) It's the best controller Sony's ever made, hands down. It blends the familiarity of a PlayStation controller with some positively charged evolution. 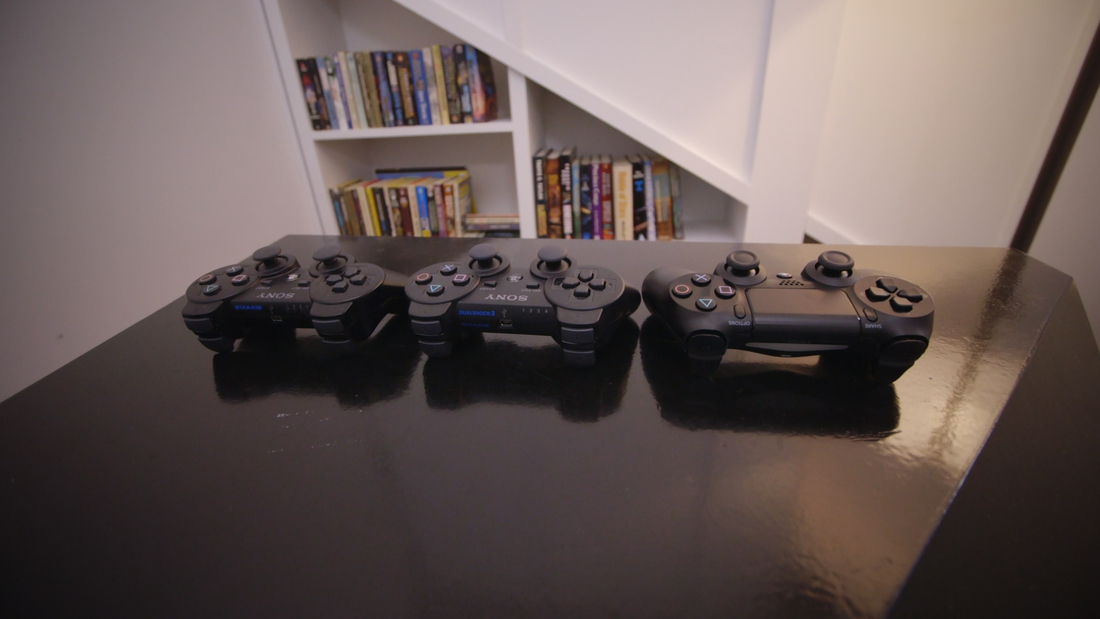 The first thing you'll notice when it's in your hands are the horns that rest in your palms. The prior DualShock line sports tapered horns, while the new controller has longer nubs. Unlike Sony's previous controllers, which were made of the same hard plastic shell, the underside of the DualShock 4 has a more tactile, rubbery feel.

The buttons are clickier, which may be due to their non-analog nature, and they're less likely to roll around in their holes, too. The D-pad is larger and has less resistance than the DualShock 3. My fingers feel like the have a home atop the new analog sticks, whereas other DualShocks felt a bit slippery. They're also significantly tighter and have ditched the convex shape, so my fingers felt more firmly ensconced where they were supposed to be.

The L and R buttons are far less squishy. The Sixaxis and DualShock 3 always felt like they were designed to let your fingers roll off the triggers. On the DualShock 4, there's a little grove for your fingers to sit in, which means no more rolling.

Though we couldn't test it on anything yet, the clickable touchpad in the middle feels solid. It sits securely in its place and doesn't slosh around when pressed. Its surface isn't glossy like a smartphone or tablet. There's resistance, which makes it feel like sliding around on the touchpad won't be a slippery affair. Note: At one point in the video, I refer to the DualShock 4's touchpad as a touchscreen — which it clearly is not. Apologies for the confusion.

We got the DualShock 4 working with a few games on a few systems, and it performed well. We'll know soon enough how the DualShock 4 holds up when the PlayStation 4 launches Nov. 15.