Opinion: How to remove all misogyny and violence from Grand Theft Auto 5

Share All sharing options for: Opinion: How to remove all misogyny and violence from Grand Theft Auto 5

Many of us find Grand Theft Auto 5's violence, torture and crude misogyny rather disgusting, but frankly, very few of us are going to stop playing it. It's just too much fun, and if there's one idea more odious than lying awash in misanthropic filth, it's the idea of missing out on a video game that is really fun to play.

So I've managed to strike a compromise: I will continue to play GTA 5, but I've modified the gameplay experience into a more pro-social, high-concept affair that I can feel good about.

In this tutorial, I will show you how you can join the fun! You will need:

With these supplies, I have created four wonderful GTA 5-powered games that you might enjoy.

A large contingent of the internet is terribly allergic to feminist discourse, and as it concerns GTA 5, this is especially true. The comments section of the Los Angeles Times' game review, which clocks in at more than 300 posts, is just one of many examples we can point to. Simply posting pro-feminist sentiment — which, of course, nobody has to read — spins legions of privileged males into a panicked, wailing mess.

That reason, among others, is why we ought not to expect pro-feminist content from the likes of GTA 5. But with Sober Feminist Game Developer, I have found a way to play this game while considering such things. In this title, you are a video game developer who really enjoys soda pop and longs to make a game that won't make women feel alienated or excluded.

2. Cut out a small bottle in the shape of Trevor's whiskey bottle. Draw a label that represents your favorite flavor of soda pop, fruit drink, or other non-alcoholic beverage.

3. Tape your paper bottle to the end of a pen.

4. Cut out a collection of speech bubbles. On them, write any pro-feminist concerns, musings, or ideas you might have.

5. Press right on the D-pad to make Trevor take a drink. As he does, hold the bottle over the screen and tilt it accordingly.

Sober Feminist Game Developer is a rather unconventional gaming experience, but it's a rewarding one. This is a solitary experience and safe space in which you can contemplate feminism in any way you please. Here are some examples of questions Trevor can ask himself:

This game will allow you to dispense with the awful content that litters San Andreas, and enjoy the highways and byways of a perfectly nice American city.

2. Place some paper over the screen and do your best to mark the location of the car. (I used a 13" television, so I only needed one sheet. If you have a fancy new TV that is even larger, you may need to use extra paper.)

3. Cut a rectangular window out of the paper and tape it over the screen. You should be able to see nothing but the car.

4. Draw a road for your car to drive on.

5. Cut out some other pieces, and draw various pieces of Indianapolis-themed scenery. 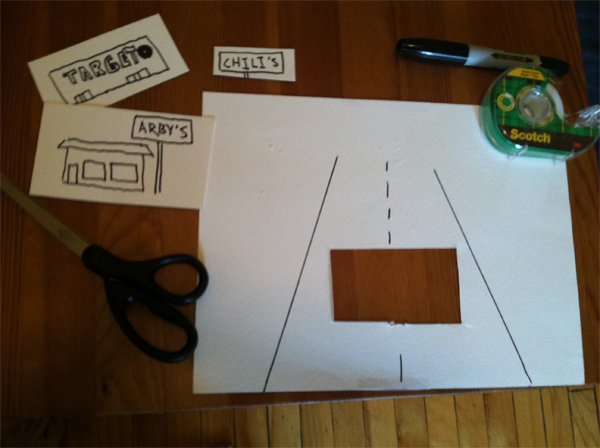 I drew the items I most commonly associated with Indianapolis, such as a Chili's, Arby's and Target. For a more immersive Indianapolis experience, you may also want to draw:

The more you have, the more wonderful combinative cityscapes you can build.

I found Grand Theft Auto: Indianapolis to be a perfectly pro-social experience. You don't even have to worry about running over pedestrians, because Indianapolis does not have any. This game really lets your imagination run wild. Of course we've all seen a combination Taco Bell/Pizza Hut restaurant, but what about a Burger King/KFC, or a Kmart with a Wendy's inside of it?

It's a sandbox game in the purest sense. Not only can you drive whatever you want, you can create what you'll find when you get there. Finding the best restaurant in Indianapolis was a real treat, but giving it a ball pit created a uniquely immersive Indianapolis experience.

If you're an Xbox 360 owner and baseball fan, you know how slim the pickings are. The only franchise with an official license, MLB 2K, is mediocre at best and fails to make any substantial year-over-year improvements. I'm happy to have finally found an alternative.

2. Find Chop's ball. If you can't locate it, buy a few grenades.

3. Just as you did with GTA: Indianapolis, center Franklin on the screen and cut out a window so that you can see him. Tape the paper over your screen.

4. Add any miscellanea you see fit. After all, you're in charge! Guess who the umpire is in this game? Do you give up? Well guess what, it is you!

The problem with open-world baseball is a lack of focus. I found myself leaving the baseball diamond just because I could. In a game with clearly set rules, such freedom of choice is rather crippling.

I was terrible at this game. After throwing two pitches, I was released from the team. God, baseball's unwritten rules are so dumb. "Don't wander out of the stadium in the middle of a game!" Thanks, Grandpa.

You, Steve Forbes and the Endless Void

In recent history, unconventional gaming experiences have come into vogue; titles such as Gone Home have been met with immense critical acclaim. This is not necessarily a pro-social gaming experience, but I was going for something avant-garde and high-concept, and I hope that I have found it.

In this game, you are the only being in the universe. In all directions, in infinite time and space, there is absolute nothingness. Well, almost! The universe contains one other being, publishing magnate and former presidential candidate Steve Forbes.

As you may recall, Forbes lost out in the 1996 Republican presidential primaries, but not before capturing national attention with proposed policies such as the "flat tax." This iteration of Steve Forbes is stuck eternally in the mid-1990s, and rattles on endlessly, his voice booming throughout the empty galaxy.

Your mission: to flail helplessly in the void until your miserable experience comes to an end.

1. Choose any GTA 5 character, and select the camera view that is farthest away.

2. As with the games above, cut out a window in a sheet of paper so that you may see only your character, and tape it to your screen.

3. If you trust your artistic talents enough, draw Steve Forbes in the corner. If you have access to a printer, feel free to print out a photo of him. I lacked both a steady hand and a printer, so I simply pulled up a picture of Mr. Forbes on my iPhone and taped it to the corner.

This is the worst video game I have ever played. My character was situated on a beach, and thankfully, I was able to find a bonfire after a few minutes. I leapt into the flames and embraced my end.

Do not play this game.