Share All sharing options for: Playing through BioShock Infinite's compelling Burial at Sea

BioShock Infinite's Burial at Sea, a return to the questionable morality and art deco aesthetic of a thriving Rapture, is a short, but powerful journey. I had a chance to play through a nearly complete version of the downloadable content at a recent press event in Irrational's offices.

Set for release this holiday, BioShock Infinite's first narratively-driven piece of post-release content, is two things at once.

The DLC tells a compelling tale, one that is empowered by a mix of familiar faces and familiar places in an unfamiliar, intriguing amalgam.

But the episode is also a player's first chance to walk the underwater streets of the original BioShock's Rapture on the eve of the city's calamitous collapse, to be a knowing voyeur; an informed witness to an antecedent to bloody fictional history.

In Burial at Sea, players take on the role of Booker DeWitt, perhaps the protagonist of BioShock Infinite. But it's not quite as simple as that. BioShock Infinite's use of quantum mechanics leaves the door open to infinite possibilities, infinite realities. So it's is unclear just which DeWitt players control in this work and how exactly it fits, if it even fits at all, with the plot of the main game.

What is made clear in the opening minutes of the game is that the player controls a DeWitt who is a private eye in a Rapture and that a femme fatale Elizabeth has hired him to find a missing girl. We also know, thanks to a desk calendar, that the events of Burial at Sea occur on Dec. 31, 1958, the day Rapture's revolution is set to kick off.

My time with the game, hurried along by a trio of impending interviews, didn't leave me as much opportunity to explore as I would have liked. I did manage to play through the entire DLC, speeding through the game's sections in about an hour and a half.

The game is essentially broken up into three setpieces. Act one gives players a chance to wander a small, populated part of Rapture without having to worry about splicers or other threats. 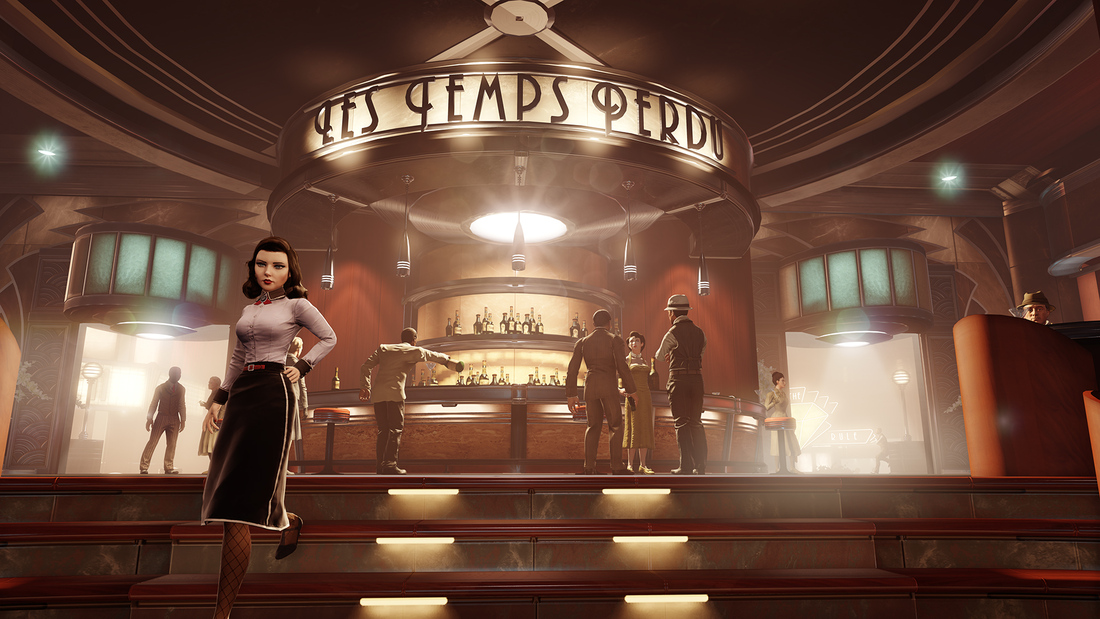 Shawn Robertson, the game's animation director, said the team designed the opening set piece for Burial at Sea to give players a chance to explore the world of Rapture without harassment, an idea taken from BioShock Infinite.

"In BioShock Infinite we had that fair before the raffle," Robertson said. "You can play fair games and see the Handyman. It's a chance to walk around with people who aren't crazy, aren't attacking you. It's citizens living their lives."

Walking from DeWitt's office into the heart of Rapture for the first time is mesmerizing, especially if you've played the first game. The game is patient with players, giving them the time to wander at their own pace, sidle up to folks to listen in on conversations, explore bars and shops. The openness of this initial area is only interrupted by a few simple fetch tasks.

While everything I saw in Rapture seemed familiar, albeit much friendlier, none of it comes from the first game. In fact, lead level designer Andres Gonzalez told me that there is absolutely no overlap between the Rapture you can explore in Burial at Sea and the Rapture you fight your way through in the original BioShock.

"There are some areas that will seem familiar," he said. "But there is no overlap."

That's because the team wanted to be able to completely recreate Rapture from the ground-up without being beholden to the designs of the original game. The fact that the original game limited how much of the sprawling city you could explore, and Burial at Sea does that even more, also helped with the decision.

While the Rapture you can walk around in initially is a fairly limited space, what is explorable is rich in detail. Every person I passed seemed to be talking about the growing problems in the city. There is also plenty of context for future problems the city would face following the fall, including Big Daddies and Little Sisters. Even in my rush to play through the add-on campaign, I found myself quickly immersed in the city's growing turmoil.

Even in my rush to play through the add-on campaign, I found myself quickly immersed in the city's growing turmoil.

Gonzalez promised that the opening section of the game is packed with lots of "bridge content" designed to connect players to the world of that original BioShock, plenty of places to explore and audio files to find.

Once through the game's opening and some basic tasks, players are moved into the second setting for the game: A much more dangerous part of Rapture that has been split into two sections, to help forward the story.

The gameplay quickly shifts to a sort that feels a bit like a blend of BioShock and BioShock Infinite. Players can use special abilities to take on the hordes of enemies that pack this new area.

While not necessary, stealth is an important option for playing through these two sections. I found myself often sneaking up on enemies or relying on ranged special attacks. When it became necessary, I'd switch to the guns I had on hand to finish off the enemies.

One other subtle change to combat is how vocal your enemies are this time around. Often you'll hear them well before you run into them. These chatty enemies both supports stealth attacks and makes planning out your fights a bit easier.

Shortly into my first battle in the game, I found that Elizabeth, while different in many ways from the Elizabeth of Columbia, still has the ability to open tears (and with them bring at least one new surprise) and supply you with occasional health and ammo. The game makes use of Columbia's chief mode of transport, but not nearly as much as was found in BioShock Infinite's main game. The DLC also brings with it a new special attack and a new weapon, both of which add new ways to dispatch enemies.

After fighting your way through the game's second and third sections, part one of Burial at Sea culminates with a boss a battle and the sort of ending that stuns you to thoughtful silence. 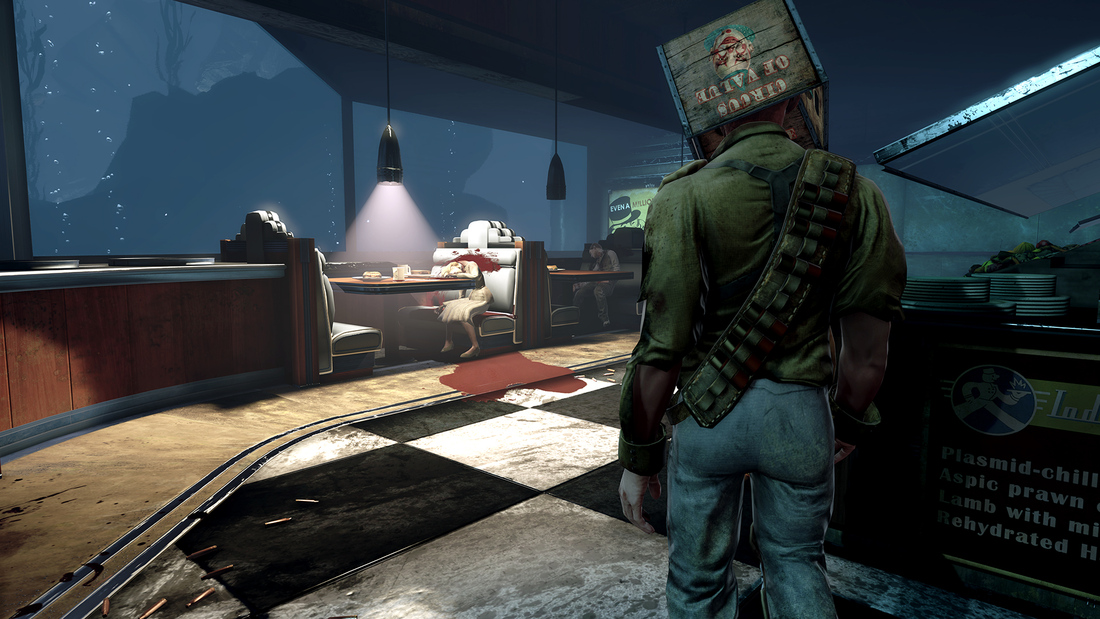 Wrapping up my play-through with minutes to spare before chatting with developer and writer Ken Levine, I sat in my chair staring blankly at the screen, running those final moments over in my head.

A few minutes later, sitting with Levine in an office at Irrational, I couldn't help but run my theory of the ending past him.

Levine smiled and answered some of what I asked about the ending, but was reluctant to discuss it too deeply.

"We found that people really liked how much we gave them to think about afterwards" with BioShock Infinite, he said. "It's all there and it makes sense.

"The strategy was to trust the audience, to give them something to work with, but have a bit of ambiguity."

The key to both Infinite and Burial at Sea, he said, is letting people figure things out on their own. And that pays off in an experience that lingers.

Burial at Sea was an admittedly short experience, more an appetizer than a meal, but the ending was both surprising and satisfying, perhaps more so than what was delivered with BioShock Infinite.

The ending is made more powerful by the knowledge that players will inhabit the character of this new Elizabeth in the next piece of content coming to the game: Burial at Sea part two.

"The biggest thing about the next one is that we're trying to show the world as Elizabeth sees it and the experience Elizabeth would have," Levine said.

The future DLC will start where this one lets off, sending players straight into Elizabeth to see that same ending through her eyes.

"It's a continuation of this story," Levine said.

BioShock Infinite has always been Elizabeth's story, Levine said, but it's culmination, through Burial at Sea part two, will finally allow players to witness the game through her eyes.

"We wanted something people could come to and get a real story with a beginning, middle and end. But the next one is definitely more metaphysical."

Brian Crecente is the news editor for the website. His most recent report was about the compulsive nature of "non-game" Cookie Clicker.