One year after the game's launch, Gearbox is hosting a massive in-game loot hunt in Borderlands 2, giving players a shot at $100,000 cash and a slew of prizes, the company announced today.

The four-week sweepstakes begins Oct. 11 at 10 a.m. ET and will end on Nov. 7 at 5 a.m. ET. Interested participants can join at Borderlands2loothunt.com and login using SHiFT accounts. Those who join the hunt must take down daily specified targets each day – that's 28 sets of targets. Details on daily targets and community goals will be available on the Borderlands 2 website.

"Claptrap serves as the master of ceremonies for this grand Loot Hunt, but each week a new friendly face from Borderlands 2 will dish out daily targets that loot hunters can take down to enter themselves into the sweepstakes," Gearbox Software president Randy Pitchford said in a press statement.

One vault hunter will win the grand prize of $50,000 at the end of the month, while each week will offer a smaller cash prize. Participating players can also earn a number of goods including a PlayStation Vita along with the handheld version of Borderlands 2, customized Borderlands 2-themed Turtle Beach gaming headsets, an Nvidia Shield with PC streaming setup, Nvidia GeForce GTX 660 Ti GFX cards, the Borderlands 2 Game of the Year Edition strategy guide and "lifetime supplies" of all 2K titles available on Steam — including all future releases. Tackling daily targets will also result in loot drops of unique items "100 percent of the time," according to Pitchford.

Only looters in the U.S. are eligible to receive the cash and sponsored prizes, but all players worldwide will be able to score in-game loot.

Borderlands 2 Game of the Year Edition will launch on Oct. 8. The PS Vita version, announced during Sony's Gamescom press conference, will launch at a later date. 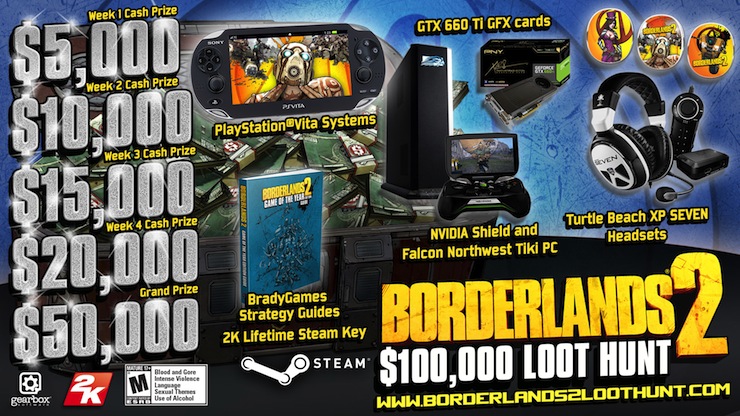