There's a lot to do in Assassin's Creed 4: Black Flag besides take down Templars and bolster your seafaring reputation. For one thing, you can host sing-alongs on the Jackdaw's deck.

Players can send Edward Kenway chasing music notes through the streets of the Caribbean's cities, each one rewarding him with a new shanty. These shanties are collectibles scattered throughout the game, and once acquired they grant Kenway's crew something new to sing as they sail along the high seas. Players can obtain 30 shanties, each based on the seafaring songs of the era.

On one hand, the sound of harmonizing sailors is a nice compliment to the crash of waves against the Jackdaw's hull. On the other hand, if you've got a long way to sail, it could grind down your nerves.

Lead designer Jean-Sebastien Decant told Polygon that you can "turn off" the singing by selecting the option in the game's menus. But at one point Decant suggested adding a more "seamless" way to make the crew shut up.

"I wanted Edward to just shoot somebody to impress them and then have them shut up."

"The first time we had it in the game, it was one song, and it was on all the time," Decant explained. "And I wanted Edward to just shoot somebody to impress them and then have them shut up. But [the team] didn't want to do that."

These shanties, along with other in-game goodies, are scattered through the map and packed prominently into the game's three major cities: Havanna, Kingston, and Nassau. Decant said these cities will include both nature and man-made climbing elements, with trees and buildings packed tightly together to allow players to shimmy up and across rooftops in different ways. This is because Ubisoft wanted to give players more starting points for their parkouring adventures, adding additional places to hang onto, climb and jump from to keep them fluidly moving across maps.

Non-land lubbers, however, can spend some time racing across the ocean, challenging other ships. You can sink a ship, but the reward in that is small. Boarding the ship is a better option for collecting resources and adding to your wealth, Decant said. Boarding a ship requires players to close the gap between it and the Jackdaw enough to jump over, and once you subdue the crew — whether by bombing the hell out of it beforehand or engaging in combat — players will have three options for their next move. 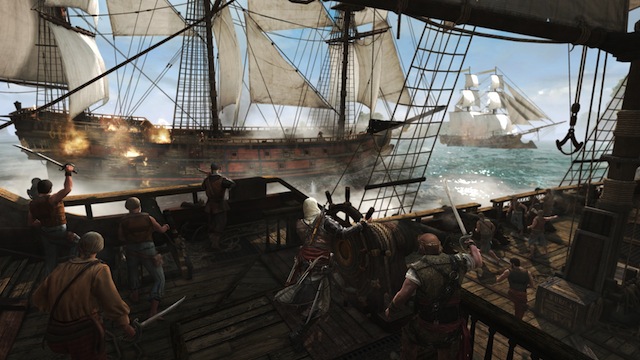 One option is to lower Kenway's wanted level. If players choose to release the crew of the ship, they will go out into the world and say "nice things" about Captain Kenway, putting off mercenaries who may have been hired to hunt the infamous pirate down. Another option is to use the resources of the ship to repair any damage done to the Jackdaw. The third option, Decant noted, will bring you more money.

In a system inspired by Assassin's Creed: Revelations' store system — in which Ezio could purchase storefronts to bring in a steady flow of income — players can add their newly-acquired ship to Kenway's fleet. It will go out into the world and make them money, bringing in extra cash for those much-needed weapon upgrades. Players will be able to access the minigame with the companion app as well.

"It's a good stream of money if you manage to salvage these ships," Decant said. "But it's a cooking mechanic, so sometimes it'll take six or eight hours to complete, but then it'll get five thousand or 10 thousand in currency back to you."

Players who are dead set on 100 percent completion will have to tackle a series of endgame challenges that pit Kenway's crew against a set of legendary ships. Decant said players will be unable to make so much as a dent in their hulls without fully upgraded vessels. The ships are scattered at each corner of the map, lurking and waiting until players are ready.

"You won't be able to take them down unless you take the time to fully understand their tactics," Decant said. "You need to play for at least 40 to 60 hours."

"I promise we're not Templars."

The modern-day setting in Abstergo Industries is not without extraneous activities as well. As players complete tasks in Abstergo, they'll be able to collect figurines of Assassin's Creed 4's main characters and display them on their desk.

Abstergo itself looks like your typical high-tech office building, and employee's desks are littered with — surprisingly — Assassin's Creed books and merchandise. One wall sports a huge poster of Edward Kenway. Decant commented that the company is "kind of like Ubisoft," and when pressed if Ubisoft is actually Abstergo and we've all been tricked, Decant noted that the idea is one the studio is definitely toying with.

"Abstergo is an entertainment company," he said. "The office is set in Montreal because we always want to ground the games in reality."

Decant said there's a segment in the Abstergo setting in which players will come across a group of employees discussing the Assassin's Creed franchise. "I want to go to feudal Japan!" one says, according to Decant, while another chimes in "F*** off, I want Vikings!" The writers had a lot of fun with scripting Abstergo segments because it's closer to their own reality.

"In the game we toy with [the idea that we're Abstergo]," he said. "But I promise we're not Templars."