Share All sharing options for: Why the Red Cross cares how video games treat war crimes

War has laws; why can't war games reflect them?

It's a simple question that the International Committee of the Red Cross has been weighing for nearly two years.

Under the Geneva Conventions, the Red Cross is mandated to protect the victims of international and internal armed conflict. During the 31st International Conference of the Red Cross and Red Crescent in Geneva in 2011, a committee discussed whether the Geneva and Hague conventions should be applied to the fictional recreation of war in video games. In other words, they wanted video war games to better reflect the realities of modern combat.

Last summer, the International Review of the Red Cross published an article that more deeply examined the issue. The takeaway was that video games are an important method for disseminating information and that they can be used to raise awareness of war crimes, but often don't reflect the realities of war.

"Beyond the Call of Duty: why shouldn't video game players face the same dilemmas as real soldiers" was published alongside articles about about drone strikes, cyber war and autonomous weapons.

In the article, written by Ben Clarke, Christian Rouffaer and Francois Senechaud, the trio ask if video games can be a positive medium of influence to reinforce understanding and respect for the laws of war.

"Why can't players be rewarded for compliance with the rules governing the use of force as well as the treatment of persons in the hands of the enemy and sanctioned for violating the same?"

The authors found that four of the five causes for violations of International Humanitarian Law during real war are reflected in many video games about war. That includes creating a perception that battlefields are always devoid of civilians, and thus an open shooting range, that virtual commanders behave in inhumane ways and that war is lawless and fought against demonized, dehumanized enemies.

That video games often represent the worst in war isn't really a contentious idea; the question is whether that is meaningful and what to do about it.

In the report, the conclusion that the authors come to is that video games often don't allow players options when asked to make decisions about humanitarian law violations or that video games' lack of nuance, be it the dearth of civilians in combat or inability to take prisoners, can lead to a misunderstanding of the realities of war. 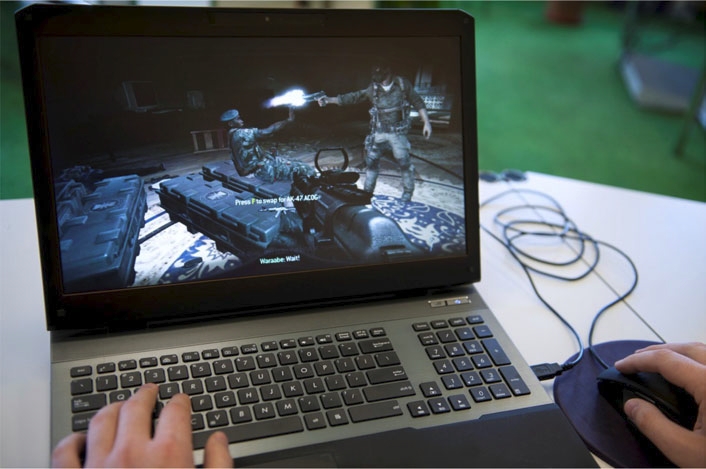 Execution of a captive in Modern Warfare 2. Photo by ICRC

But so what? Aren't video games entertainment?

The report argues that while video games may not teach bad behavior, they can most certainly trivialize war crimes. They can also lead to a general misperception of what is and isn't lawfully allowed in war.

The big question, ultimately, is what to do about it.

The report is clear that the Red Cross isn't asking for government intervention. Instead, the authors are calling for the game industry to be willing to spend the time to create more realistic video games.

And they've already seen some success. Members have met with the industry a few times over the past year, including talking to the developers behind war game Arma 3.

The authors of the report say they hope to see some of the fruits of that labor by this December.

International Committee of the Red Cross spokesman Bernard Barrett told Polygon that while the issue has been examined, there is no dedicated group working on it.

"There are the authors of the aforementioned article and a few others who have an interest in this issue," he said. "They are part of a unit here in Geneva which works on implementation of the law of armed conflict, be it through meetings and working with military training officials, universities or other groups of interest. There is no official ICRC report on the topic, aside from the study in the Review."

And the ICRC has no plans to try and study the impact video games might have on behavior, he said.

"We do know that video games are used as recreation by many off-duty military and also by young men and women who could be recruited," Barrett added. "But they are also widely used by the general public. We do not want to influence how people perceive war so much as to influence the understanding that there are laws governing conflicts. We certainly believe that the widespread use of video games can affect public perceptions. We do not want to censor video games nor do we believe that video games should be sanitized to eliminate any act that contravenes the law of arm conflict. We suggest that game developers themselves incorporate scenarios that reward compliance with the law and punish virtual breaches.

"The ICRC has the mandate (in the Geneva Conventions ratified by all states in the world) to encourage the awareness, implementation and the respect of these Conventions. This is an essential part of its mandate."