Share All sharing options for: Respawn's trial and error of creating Titanfall modes

Respawn is actively experimenting to create ingenious modes for its anticipated multiplayer shooter Titanfall, a process that takes plenty of trial, error and laughs.

"We don't make decisions lightly and we try to choose what is right for the game and what is actually fun, and sometimes people are like, 'That sounds awesome,' and we are like, 'Well, actually, we tried it at the studio,'" community manager Abbie Heppe told Polygon. "But we are trying to be smart about it and trying to figure out what would be fun for players and lot of cool options for modes."

"You know almost every possible game mode that you can think of: pilots-only, Titans-only and many, many variations of that stuff is most likely things that we have tested at the studio," Heppe said when asked about the possibility about human-only or Titan-only servers. "And I know that the team right now is working on different game modes and cool stuff for it."

As Titanfall is still in active development, the studio is still figuring out exactly what all of the modes will be but there are plenty more planned for the shooter, Heppe said, sharing some of the failed modes that didn't make the cut.

"We definitely tried a mode with way more Titans than probably should be on a map and it just turned into this cluster bunching. It gets ridiculous," she shared. "I remember once we tried one-on-one and stuff like that. We tried a lot of different variations of other things that you have seen in other shooters, but yeah, we are still in the process of creating things like that. I'm excited to see what they have done in the past six weeks to see what made it into the game."

The gameplay demo currently making the convention rounds features one Titan class with three set loadout schemes, with more Titan classes set to be included into the final game.

"I can't say how many [more will be added] but there is more than one but I can say that the other Titans are different and look different and are fucking cool," she said, confirming that that they will all be bipedal Titans. "The Titans mimic humans — that way it is so easy to go from human to Titan, you want that control scheme to be exactly the same. Your more casual gamer wants to get in, have a good time controls and play easily."

When rumors of Titanfall first began to leak, Respawn was concerned that the rudimentary murmurs of "mechs" would misrepresent the game and its controls as being slow and cumbersome due to the stigma that comes with the term.

"We were worried enough with like before we announce the game there were leaks saying that we were working on a mech game and we were like, 'Ah, we are trying not to use the name "mech" because it brings up a lot of associations in people's heads,'" she said. "I don't think that [mech] is really descriptive of Titanfall; it's fast and casual. 'Mech' has a stigma with a lot of gamers."

"There was this concern that people would see the mech rumors and just tune out," Heppe said. "And because it was leak stuff and we weren't talking about it yet, we couldn't hop in and say, 'Hey, just so you know, there is this whole other element to it and it is really good. You know, it is fast stuff!' You don't get the chance to correct leaks in that situation, so it was like, 'Oh joy! Time to announce.' So yeah, that was a rough one."

When Titanfall's gameplay is bought up with its developers, they often talk about the arduous task of getting players to unlearn the military-shooter ground-base play style and adopt the wall-run, double-jump and bunny hop movements that the jetpack-equipped pilots allow.

"But you want to think about clever routes, there are a lot more ways to get around the map then you traditionally have," Heppe said, saying it is more about thinking creatively and like not playing like you would normally play because your map is three-dimensional. "Why go through the building when you can go over it? Or around it on walls? It is all about finding those approaches."

According to Heppe, it takes six to eight minutes for a player to shirk the cover-based shooter muscle memory and figure out the wall-running mechanic. Titanfall's gameplay also makes it easy to live for a substantial period of time, says Heppe, allowing players to take part in crazy "action movie chase sequences."

"You can land your Titan on enemy players, which is really difficult because the motion is so fast [...] it is easier in these demo games because people are still getting use to the wall-running and jumping and you get more people on the ground. That is when you get them. And that is really fun."

"When there is someone the back of your Titan you can either get out and shoot them off or you can use the electric smoke to get them off your back," she said. "My favorite combo is when you have pilots on your back and you can melee them out of the air, which is most satisfying. There are so many other tactics that we can't talk about." 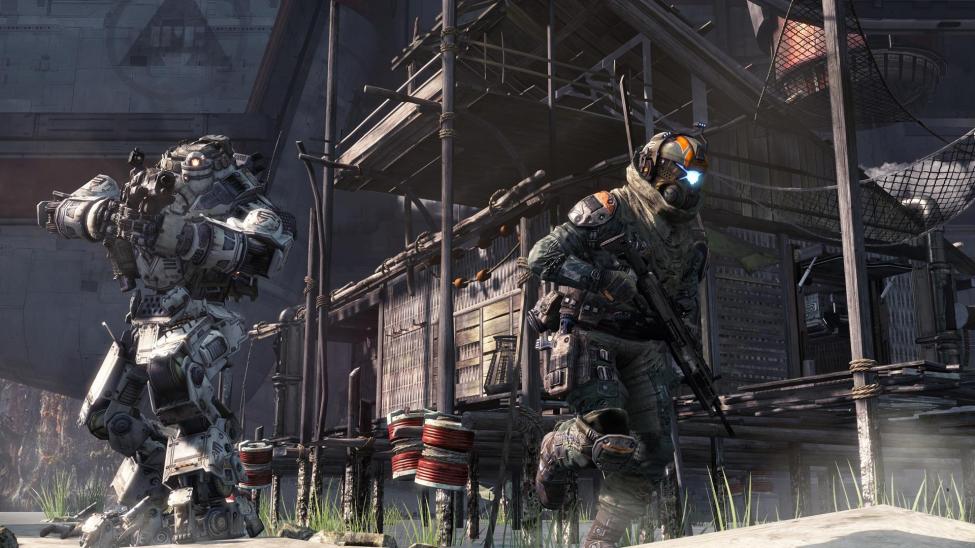 "You know, I wall-run here and I get up to a roof and get around this building and come behind somebody and then I go up to the tallest building, because there is a guy always up there," she said.

Heppe recalled a time when an enemy player went to the effort of wall-running up one of the taller buildings, only to be jump-kicked off by another player with a "boop."

"A lot of the time I just use my Titan for either cover fire or you can use it in the level to distract someone and then come around behind them," Heppe said. "There is a rocket launcher on this heavy explosives Titan featured in this build, the spiraling rocket launcher, it is very slow. I equip smoke, throw that up and fire a bunch out of there, and then dart around a building and come up behind another Titan and then start melee-ing on them. I love it when it just turns into robot boxing — I mean, it is so goofy."

Pilots and Titans have unlocks and progression, with a few Titan abilities including the electric smoke, which acts as a smoke screen and damages other players, and the vortex blocker that collects enemy bullets and ammo that and can be thrown back at them. A few announced abilities for pilots include a satchel charge that players can sling at enemy Titans and a cloaking ability.

"For when you are traversing an open area because not every level is like Angel City," Heppe explained. "There are some maps that have much larger space where you have to traverse and having that cloak makes it less easier for Titans to see you."