Debuting Dynamighty in a world of espionage

Share All sharing options for: Debuting Dynamighty in a world of espionage

In 1958, the United States Air Force developed a plan to launch a nuclear strike on the moon. In hindsight, this was a bad idea. But at the time — nestled deep in the paranoia of the Cold War — the U.S. and the Soviet Union alike engaged in a space race very different to what we know today.

Project A119, or "A Study of Lunar Research Flights," was a top secret project funded by the U.S. government. Part of its goal was to answer questions about planetary astronomy. The bigger goal, it was revealed in 2000 by a former NASA executive, was to show the capabilities of the United States. The Soviet Union had earlier taken the lead in the space race by launching the first artificial satellite to orbit around the earth. To boost morale of the American people, Project A119 aimed to create a nuclear explosion on the moon that would be visible from earth.

The project was never carried out. Like many of the abandoned projects of the Cold War, it's not widely known of, either. Most people don't know how far governments did or didn't go during that time.

Cue Dynamighty, an independent studio that has found a goldmine in the dossiers of the Cold War. 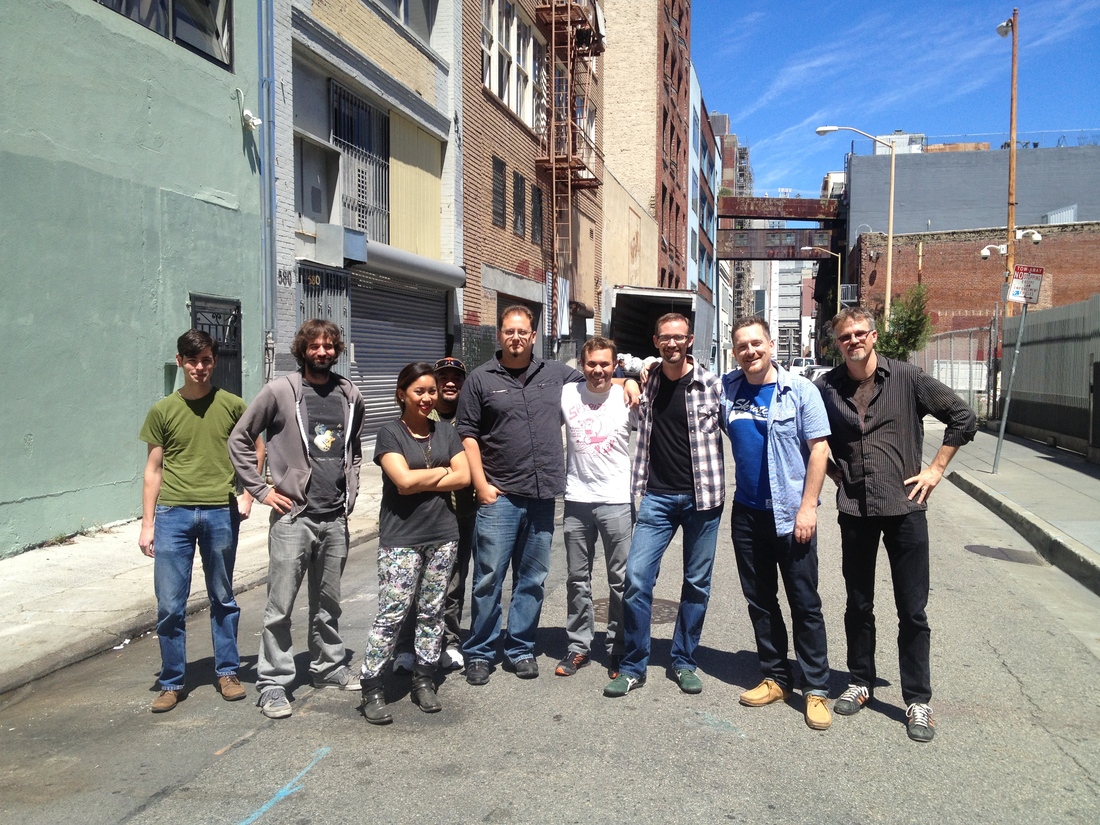 Founded by former LucasArts developers along with an art director from Pixar, the studio is embarking on its debut video game, CounterSpy. In the side-scrolling action shooter for PlayStation and mobile devices, players take on the role of Jean Chevalier, a member of COUNTER, which is an external agency tasked with ensuring that the fictional Cold War stays as cold as possible. In Chevalier's case, he must infiltrate the camps of the two opposing factions to disarm them before they launch missiles to blow up the moon.

The levels are procedurally generated, with disarmament being the end goal of each stage. Scattered throughout the levels are allusions to other real-world government plans that were abandoned — plans that read like they came straight from a James Bond film.

"I love tying into real world mythologies — it's something that's always interested me," says Dynamighty's co-founder and lead designer, David Nottingham. "You ground it in something you recognize. With CounterSpy, there was the love for Bond, all the espionage TV shows I grew up on and, from a visual point of view, there's so much stuff from that period that's beautiful.

"Operation Acoustic Kitty, a project the CIA launched in the 1960s that attempted to use cats as spies..."

"The thing I love about the espionage world is its exploration of human nature and what it shows about people," he says. "What it does to someone who's in a world where your whole purpose is to be involved with deception and lies."

CounterSpy is like a relic from the mid-20th century. Like a forgotten TV show, Dynamighty has carefully crafted the game's look and feel to be authentic to the time period. There's an old grain affectation that blankets the game's art and environments. There's vignetting around the corners. The colors and designs are bold and reminiscent of Saul Bass movie posters. Jean Chevalier's movement is cartoonishly sneaky, from his swift, tip-toeing walk to the way his body snaps into position when he pulls out his weapon. There's a darkness to the game, but it also has a satirical tone that gives the player a cheeky wink.

"At its heart, it's an action side-scrolling shooter game," says creative director Mark Holmes. "But from that satirical standpoint, it takes some of the fodder of that era and that Cold War escalation and plays with it."

As the player traverses each level, they will uncover blueprints and dossiers that reference projects showing that truth can be stranger than fiction. There's the reference to Operation Acoustic Kitty, a project the CIA launched in the 1960s that attempted to use cats as spies. A microphone was implanted into the cat and an antenna into its tail. The plan failed. The cats were deemed too uncooperative because they were easily distracted by food. There's also the reference to the many strange contraptions governments built in attempt to spy on each other. And then, of course, there was Project A119.

"We're going into the heart of this war machine of these opposing sides building bigger and bigger missiles, putting the world at greater risk," Holmes says. "When you think about it and do some research into how many missiles [both the U.S. and the Soviet Union] had and how many times they could blow up the world ... it's just amazing we're still here. CounterSpy felt like a fun way to exaggerate it and point out how ridiculous it was." 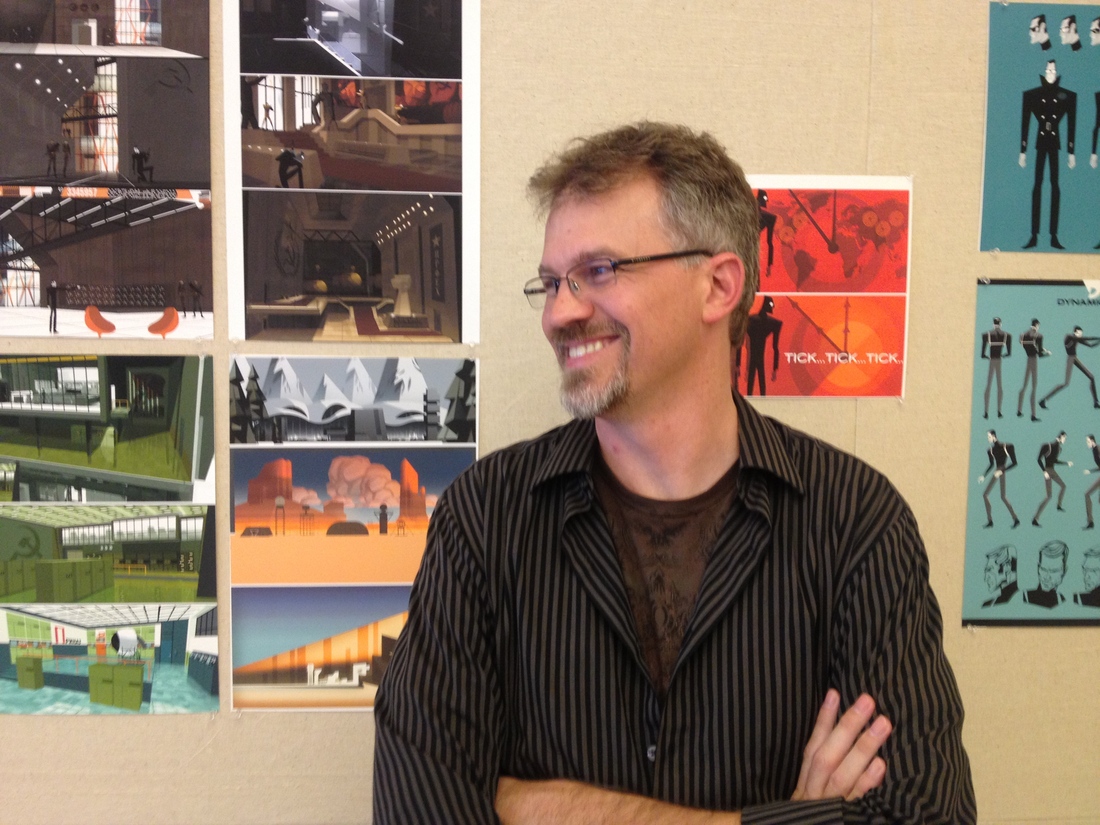 There's an excited and nervous energy to Dynamighty. The studio started with only four people before it gained Sony's support off the back of its pitch for CounterSpy, which allowed it to bring more staff on board. It's still a small team and, despite its developers having a wealth of experience from studios like LucasArts and Rockstar, Nottingham says the studio is no less anxious about its first game.

"You can't think that because you've worked and been successful in AAA that you're going to have it all figured out when you do something smaller or indie — it's almost like you're learning a whole new skill set," he says. "There are some basic principles that carry over, but there's a ton of stuff that doesn't.

"We're still rookies making our first game. We're still making mistakes we would have made 10-15 years ago."

"We're still rookies making our first game. We're still making mistakes we would have made 10-15 years ago."

A large part of that anxiety comes from the pressure the studio is putting on itself. As an independent team, it now owns all its ideas and decides its own path, but this also means it owns its flaws — there are no excuses or crutches to lean on, and everything that CounterSpy is and isn't will be at the hands of the studio.

"I feel like for my whole life I've wanted to be in a position where I could make games, make my own games and put a voice into something," Nottingham says. "So for Sony to finally give us the opportunity, I take it very seriously. I want to repay that.

"We don't look at it like, 'Oh yeah, they're a business, they made a business decision to invest in another business.' We think about the individuals at Sony who took a risk on us and believed in us. We want them to come away from this and feel like it was a good decision, that they're working with good human beings."

Sony Computer Entertainment's executive producer, Alex Lee, believes Dynamighty has little to be anxious about. He says the studio came along with a strong IP and the technical ability to deliver it. According to Lee, the founders of Dynamighty knew what they wanted to build and they had a strong vision from the very beginning.

"They had the polished look and feel of something big, but could deliver it in a bite-size that has a different twist on the gameplay," Lee says. "You want to play that game over and over. And the fact that it was a small team that could deliver something as polished as The Last of Us in some way shape or form, it was a very easy sell.

"They were able to effectively and immediately describe what their vision was. The thing they wanted to make was very clear."

The other part of the anxiety comes from the studio's desire to make a game that has something to say — a goal that it won't know if it has accomplished until the after game is out and people have played it.

Nottingham and Holmes speak of wanting CounterSpy to be a game with an edge — a game that is more than bubblegum. They speak with admiration and respect for titles like The Fullbright Company's Gone Home and Lucas Pope's Papers, Please — small-scale indie titles that give players something to take away and think about.

The take away from CounterSpy is subtly woven into its theme — if players choose to scratch the surface, they'll find ideas inspired by the absurdity of the Cold War, the manufactured ways of thinking that emerge in times of conflict and the dangers of fundamentalism.

"There's a danger to having a fundamentalist outlook on the world, which in my mind is, 'We are absolutely right and those who opposed us as absolutely wrong — never the twain shall meet,'" Nottingham says.

In CounterSpy, the nationalities of the opposing forces are never explicitly stated. Their similarities far outweigh their differences. Both aspire toward a common destructive goal. Both are blinded by their steadfast beliefs.

"It's that kind of ideology that I think gets us into a lot of trouble all over the world in many ways. So this is just an example of that that played out in this period. Each side sort of fundamentally believed that the other side was a grave threat to their existence."

Nottingham tells Polygon that entertainment can have a positive contribution to society and engage people to talk about things. With CounterSpy, if players wish to accept it at face value as an enjoyable shooter set in a rich and fleshed-out fictional world, the developers are completely fine with that. But if the game piques the player's curiosity about the absurdity of things that have happened in the real world and makes them question the world they live in and the status quo, then perhaps the developers will have achieved their goal.

Regardless of whether Dynamighty is able to hit that mark, Nottingham hopes that players will at least see what the studio is trying to do and the effort that is going into its debut game.

"Right now is such an amazing time for games with so many unique voices taking the medium forward. People are really embracing taking creative risks, which is equal parts inspiring and intimidating. We are very critical of our own efforts, but you just have to keep reminding yourself that if you put your heart into it, people will respond. The most rewarding part of making any game is seeing it find its audience. When that happens you tell yourself OK, the universe saw what we were trying to do."