Share All sharing options for: How 'Thriller' and a DDR pad inspired a techno rhythm dungeon crawler

The heroine of Crypt of the NecroDancer — Brace Yourself Games' tactical rhythm and action mashup that took this year's PAX Prime by storm — was chosen by accident. Or rather, she is who she is based on Ryan Clark's affinity for the works of Japanese director and animator Hayao Miyazaki.

"Her name is Cadence," Clark told Polygon. "She looks the way she does because Ted Martens, the pixel art guy on our team, and I were trying out concept art for the main character and what he or she would look like.

"One of them looked a little bit like Nausicca from Miyazaki's Nausicca of the Valley of the Wind," he said. "As soon as I saw that character with the kerchief in her hair I just thought, 'We have to use her.'"

"We're both big fans of Studio Ghibli's movies, where there are strong female protagonists. We're exited to have our own game where we can explore that too."

NecroDancer's crypt setting and eerie atmosphere were partly inspired by another happy development accident. While Clark was testing an early version of the game, a segment when the game's roguelike and rhythm elements were just starting to come together, he used Michael Jackson's iconic song "Thriller" as the test song. After that, the supernatural elements began falling into place.

NecroDancer is a roguelike, a type of action role-playing dungeon crawler hybrid with randomly generated levels, onslaughts of enemies and permadeath. Players navigate NecroDancer's procedurally generated dungeons by using arrows (on a keyboard or Dance Dance Revolution pad) to move in the direction they want Cadence to go. Randomly spawned enemies like bats, dragons, slimes and skeletons will crop up in your way along with traps and treasures. Button combinations allow players to use spells against enemies, such as columns of flames and ice, and can heal by pressing up and left together.

But getting roguelike and rhythm mechanics to marry are the culmination of almost 30 years of study on Clark's part. When he was six, his father purchased an Apple IIe and showed Clark how to program in basic language. Clark had blown through his own store of video games and was growing bored with the repeated gameplay; now, he thought, would be a good time to make his own.

"I wanted to do something new and play something new, and the only way I knew how to do that was to make them myself," he said.

Clark spent the 80s and 90s "making crappy games for fun" and running two successful websites that taught aspiring programmers how to code in basic and C++. Teaching others, Clark said, helped him progress from being just a hobbyist programmer to an experienced developer. In 2004 he and a friend founded Grubby Games, which published puzzle title Professor Fizzwizzle — a 2006 Independent Games Festival nominee — and in 2009, with seven games under their belt, the two sold Grubby to Big Fish Games.

In 2011, Clark quit to go indie again. This is where Crypt of the NecroDancer began.

Clark has always had an affinity for roguelikes, so there was no question as to what NecroDancer's foundations would be built on.

"When I was a kid, I played a lot of the original rougelikes back in early 80s," he said. "I played a heck of a lot of it and I loved it. Roguelike games are harder to get bored of because there's so much to learn and the difficultly level is so high.

"With the recent resurgence of roguelike games, I've been having fun playing them again — but what bugged me as a kid, and even now, was that sometimes when you died it wasn't your fault, it was the game's fault," he went on. "It felt very frustrating because there's nothing you could have done about it, you couldn't have foreseen that you needed to rush so super fast through it, so you didn't level up or gather items or whatnot. So I wanted to make a roguelike game that was more fair. I wanted to make a roguelike without all those onerous requirements."

"What bugged me as a kid, and even now, was that sometimes when you died it wasn't your fault, it was the game's fault."

Clark used Mossmouth's Spelunky as an example of fair treatment in death. Dying in Spelunky means you failed to see something or you lack the skill to get through a particular challenge, something you need to keep working at to overcome.

"If you fall on spikes or get killed by a bat, you're an idiot," Clark said. "When you die, you lack skill or knowledge. Spelunky is based in a real-time setup, but I didn't want to get rid of turns entirely," he said. "So I made the turns shorter, because in most roguelikes you can sit there for a long time and plan the optimal moves. If you have to plan more quickly, it brings skill into the equation."

Clark knew he wanted his game to have the same feel as Spelunky, a game that demanded the same balance of skill and attentiveness from players. After some extended play time with Wii game Rhythm Heaven Fever, Clark had another "accident."

He began tapping rhythmically on his keyboard while testing out NecroDancer to "Thriller." He knew he couldn't go back.

Making the two genres — seemingly on completely different ends of the gaming spectrum — work together was not difficult at all, Clark said. He had shortened the game's turns already, and it "just felt good" carrying them out to a rhythm and brought in the quick skill element he was looking for.

"It worked pretty much right away," he said.

The beat keeps time with players' moves, but it also ties into the storyline. Cadence's heart has been stolen by the titular NecroDancer, who "makes it beat to his nefarious rhythms," as Clark put it. Whenever Cadence dies, parts of her life flash before her eyes, allowing players to piece together her story learn what brought her to the crypt in the first place. 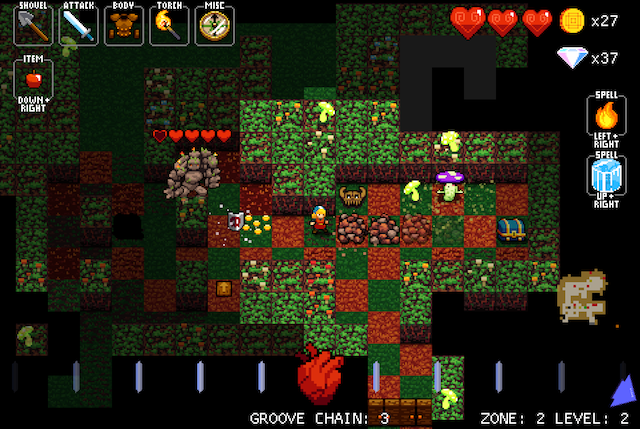 So why use a Dance Dance Revolution controller?

"It's more fun or more exercise that way, it's definitely harder," Clark said, noting that players can also opt for traditional keyboard controls. "I initially used it because I wanted to keep the controls simple, and I don't like games with billions of buttons. I was trying to keep it to just the four arrow keys and then my friend said, why don't you just play it on a DDR pad?

"It's fun to fight with your limbs because you're panicking because some big monster is coming towards you."

"I went out and picked one up and tried it out with my friends. People were getting into it and getting killed by dragons. They started panicking on the DDR pad because you're used to, as a gamer, having instantaneous control over everything. It's fun to fight with your limbs because you're panicking because some big monster is coming towards you."

For now the team is focused on the game's launch via Steam. Earlier this summer, the studio said they would release part of Crypt of the NecroDancer via Steam Early Access this year, but now Clark is not so sure that's feasible.

"Only half of the game done, and half the reason we're considering Early Access at all is because you can play the game with your own MP3S due to the beat detection algorithm it uses," he said. "People are going to try with a huge variety of music and we want to make sure the game works as well as possible. Early Access is a great avenue for that, so we can make sure the final release is as good as it can be."

Clark noted gamepad support will be added in the future, with NecroDancer playable on the A, B, X and Y buttons. Brace Yourself Games has also been in talks with "all the major platform holders," so Crypt of the NecroDancer may be making its way to other platforms in the future.