Shadow Warrior shows its potential early, but never quite delivers on it

Developer Flying Wild Hog's reboot/remake/reimagining of the 1997 3D Realms game has an odd collection of expectations and obligations to meet — or to ignore. The original game was very much of its era, predicated on Duke Nukem-style humor with a healthy dose of racist jokes to boot, but it also added melee combat to distinguish itself from its peers. 2013's Shadow Warrior eases up on the former, and commits more fully to the latter. At first, anyway. But Shadow Warrior can't quite manage to juggle its melee potential with its shooter framing, resulting in a game that feels like it could have been so much more than it is.

Shadow Warrior starts well, despite a main character named Lo Wang — a half-Chinese half-Japanese bundle of nerd fan-service and dick jokes, because wang. Lo Wang works for a crimelord in Japan and has been tasked with acquiring an ancient sword known as the Nobitura Kage from its current owner, whether by commerce or force. Plans go in the direction of "force" pretty quickly from there, but things get weird when a demonic invasion kicks off and a magical construct flees with the sword. Dying of injuries, Lo Wang is forced to strike an ill-defined bargain of sorts with the spirit Hoji and sets off after the Nobitsura Kage and the demon army following it.

It's not the most inventive story, but there is, at times, more going on than a simple "idiot on a quest for absolute power for someone else" kind of tale. There's a backdrop of cosmic pantheon politics behind Shadow Warrior's more immediate concerns — the demons' home dimension is in the midst of an epic family squabble involving a coterie of powerful forces. Their characterizations and motivations borrow from various origin-of-the-world myths, from Chinese to Roman-era religions, and are easily the most consistently interesting parts of Shadow Warrior. Watching the chronologically jumbled mix of memories and mysteries unravel drove me through the game's frustrating failure to capitalize on its mechanical strengths.

While Shadow Warrior a packs first-person shooter-standard complement of guns, acquired at a slow but steady clip over the course of Lo Wang's dozen plus hour adventure, they're not much to get excited about. Instead, Devolver Digital's point of distinction for Shadow Warrior is sword-based combat. Lo Wang's got some decent katana skills, and as the game progresses, you'll earn points to unlock new active and passive abilities. 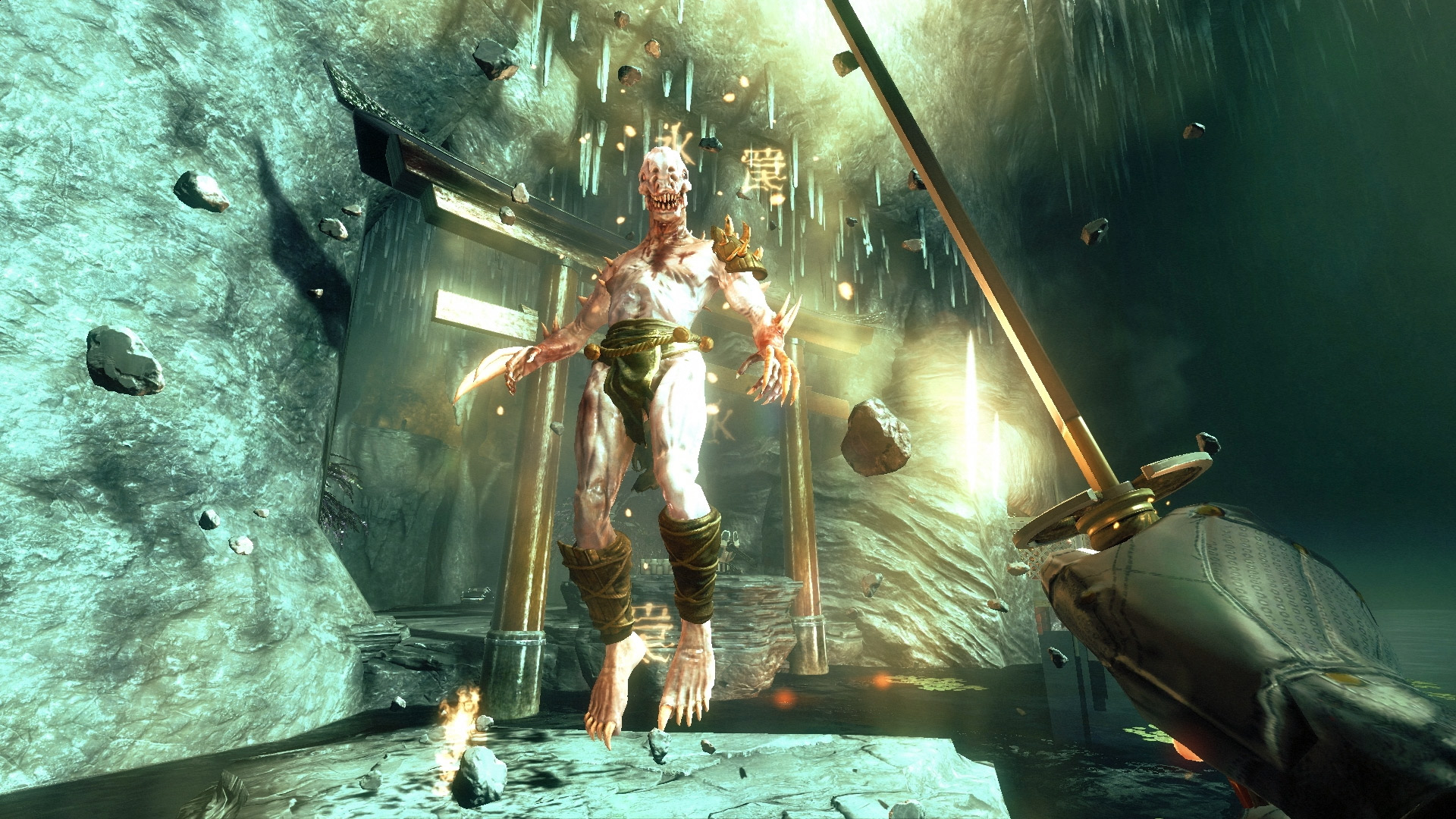 This move is fairly clever — instead of an automatically regenerating health bar, Shadow Warrior bridges the gap between modern design sensibilities with its mid-90s roots by tying health regeneration to a spell you receive early on. While this allows for similar momentum to other shooters that don't force you in search of health packs after a firefight or two, you still have to find space to cast your spell until you unlock the ability to take a hit and keep the spell moving. You also need to successfully pull off the correct stick/trigger movement combo to make it happen, assuming you're on a controller. With the keyboard and mouse, this is easier, but you're getting a far less interesting sword-fighting experience than with a gamepad. 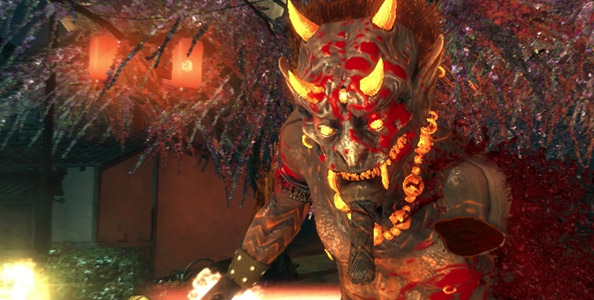 That would be unfortunate, given that swordplay is the best thing Shadow Warrior has going for it. Sword strikes are translated pretty well to directional movement during striking and drawing back, and holding a block also readies Lo Wang for a different kind of strike, leading to a decent variety of offensive options up close. This works best early on — enemies move more methodically then, with a focus on swordplay over guns. I enjoyed the space Shadow Warrior gave me in the first level or so to experiment with sword timing and different kinds of slashes, and against human enemies, it was satisfying to out-strategize them and dismember them. 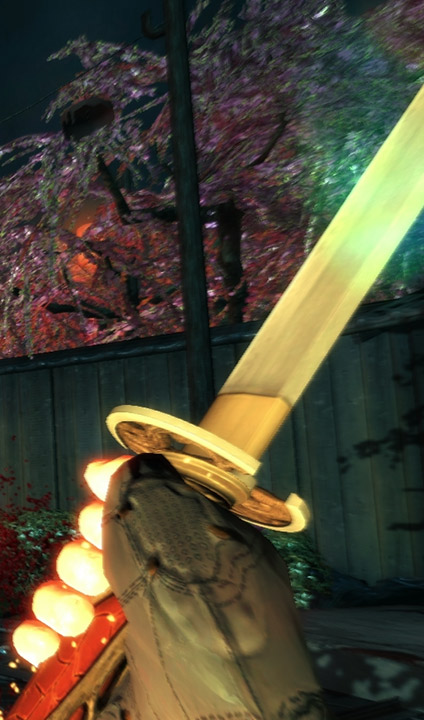 I might have gotten more riled up by Lo Wang's yellowface schtick and unending dick jokes, but it's so half-hearted that I couldn't muster up any outrage. Shadow Warrior isn't assertive or loud enough to be properly offensive. Instead, it's tiring.

Later, though, Shadow Warrior leans too heavily on its 90s roots, substituting thoughtful cat and mouse for a constant onslaught of monsters that mindlessly rush forward or take potshots from a distance. While this is varied somewhat by larger nightmares that might be invulnerable save for a particular weakspot, or that take a huge amount of punishment and revive other monsters, the early swordplay dynamics are lost.

I still used the sword, don't get me wrong, because I found most of the weapons Shadow Warrior had to offer boring and unsatisfying. And there's no reason not to use the sword against any enemy you can touch, really — unless they're unreachable otherwise, steel is a faster exit row for your demon adversaries than almost any other offensive option. 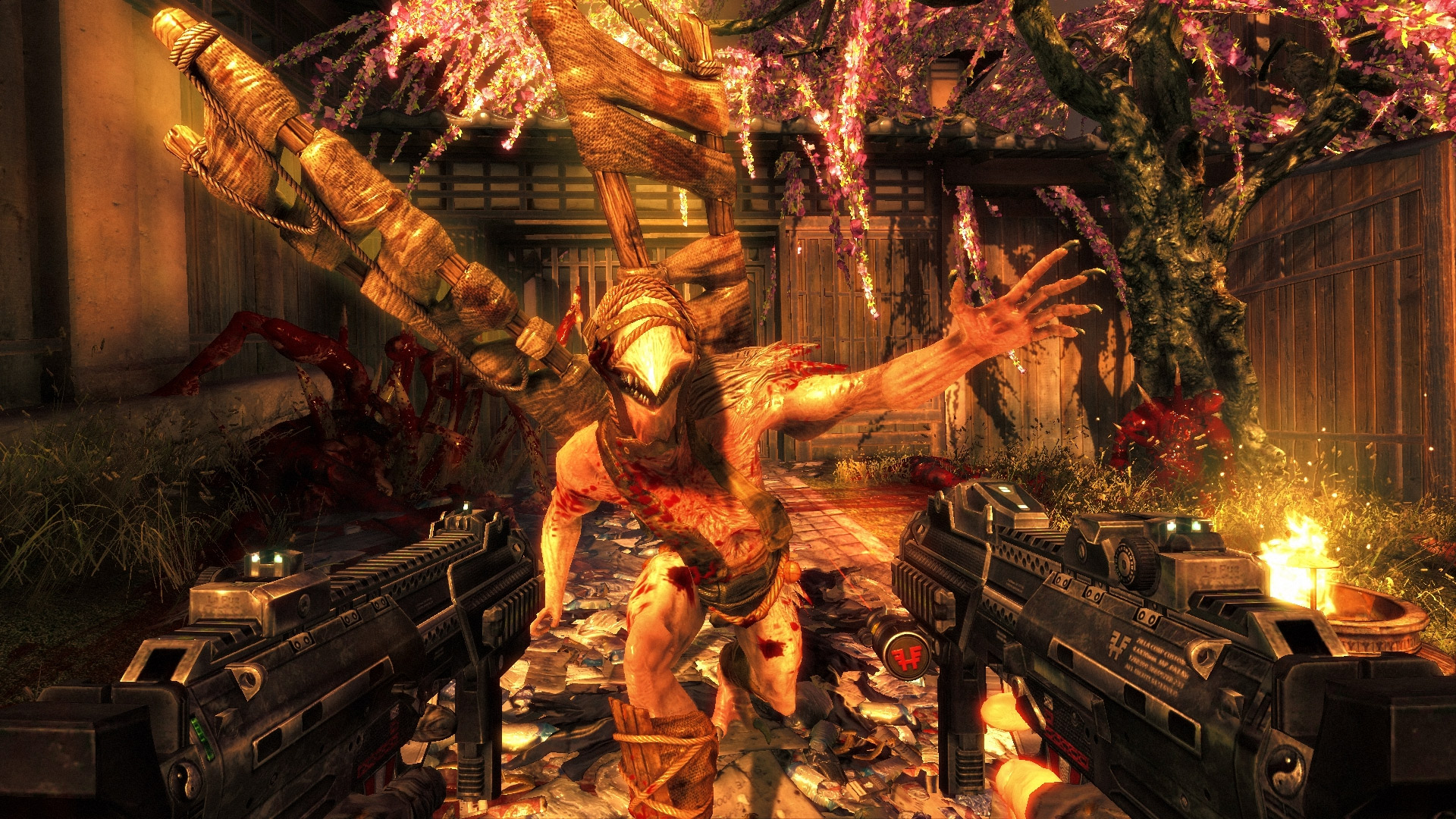 Guns aren't totally useless. The boss encounters peppered throughout Shadow Warrior do a great job of taking the cagey strategy required of early sword combat and applying similar ideas on a much larger, ranged scale where Wang's sword skills are wasted. Still, there's a great sense of movement and give and take necessary at these points that feels less considered elsewhere — which just made me wish for something more everywhere else.

This feeling hit me particularly hard at the final stretch of Shadow Warrior. I ran up a seemingly endless series of steps against a demon-dimension sky, waves of power flying from my katana as I swung it back and forth. Swaths of demons fell in my path as the soundtrack swelled and I gained life from every enemy killed, and my upgrade choices made the final enemy encounter easy, but satisfying — after all, I'd picked my own path to god-killer. And it was all almost enough to wash the taste out of my mouth of the previous level's conclusion, where a climactic sword fight, teased over the course of several chapters, ended in ... a cutscene. I felt cheated, like the build up to something great was wasted.

Shadow Warrior shows its potential early, but never quite delivers on it

This failure to follow through is Shadow Warrior's biggest problem. As a throwback revival, Shadow Warrior lives up to the minimal expectations all but the most die-hard old-school PC shooter fans might have for what it should be. But when Shadow Warrior is less content to settle and reaches for more with its swordplay, its boss battles, and its story of cross-dimensional family infighting, it flirts with something much more â often enough to make clearing a lower bar seem insufficient.