Share All sharing options for: Drakengard 3 was developed with 'mature JRPG players' in mind, says director

It has been eight years since the last game, Drakengard 2, launched on PlayStation 2 and four years since the debut of series spin-off game Nier. Shiba explained that the large time gap was due to a fluctuating market — as casual gaming became more common, less players were willing to sink time into a 30-plus hour role-playing game that required lengthy sessions of grinding for experience points, cutscenes and other parts that failed to hit the instant gratification sweet-spot.

"There's a larger market now," Shiba said. "But before, there were more casual gamers and the market of console gamers started to sink. Few [JRPG] console games were being released, and that's why we haven't made anything new recently. Even the production of new Final Fantasy titles has slowed down.

"The JRPG market was shrinking, and we realized we just needed to make more."

"We were putting out fewer titles because casual games were becoming more popular, and we saw another problem: the JRPG market was shrinking, and we realized we just needed to make more," he said. "We wanted to go against the market trend because we were feeding into the circle."

This is also why, Shiba said, Drakengard 3 is more action oriented, with much of the game's dialogue running over battle sequences. There are two key elements to the game: the story and the action, and the development team has sought to seamlessly weave both together to keep the game moving at a brisk pace.

This was evident in the hands-off demo Shiba showed me. Drakengard 3 — set to launch exclusively on PlayStation 3 in Japan this December and in North America next year — follows Zero, the eldest of six sisters that are Intoners, magical goddess-like beings that use magic by singing. One day, Zero is abandoned by her sisters — also named after numbers — but why, Shiba wouldn't say; that's a story point to be revealed later. Zero's response is to set out on a quest to kill them all, but not out of revenge. Again, this is a major story point Shiba said can't be shared yet, but it doesn't make the ensuing bloodbath any more chilling.

Zero isn't want you would call a typical JRPG heroine; she isn't exactly walking the path of righteousness.

"This isn't your typical JRPG."

"This isn't your typical JRPG," Shiba said. "The plot is very atypical. We're exploiting something that typical JRPGs really haven't before — the major difference is that it doesn't follow the JRPG formula. Most games have a heroic figure fighting to save the world and fighting for justice. Drakengard 3 is more of a dark fantasy featuring an anti-hero."

But there's more to Zero's vendetta, and Square Enix wants players to understand this on a deeper level. In Japan, as part of the game's marketing, Square will release a new online graphic novel every two weeks leading up to the game's release. These comics will share more details on each of Zero's sisters, painting a backstory for the tortured family. When players start the game, they will have a better sense of what is going on and who these women are — but players who don't choose to read the comics won't have any trouble jumping in either, Shiba said. 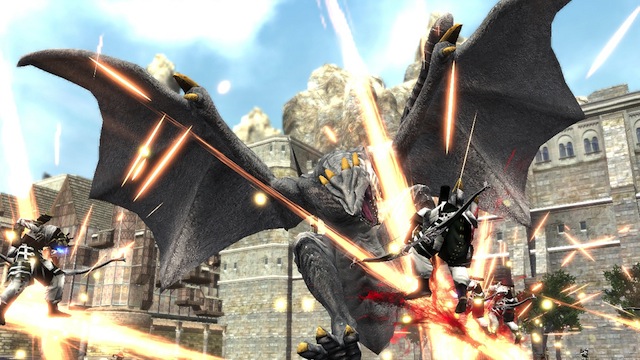 "JRPG fans really love their characters, and they want to relate to their characters," he said. "We really wanted to feed more information about each character to players so people will be more interested in the game as a whole."

The action focus of Drakengard 3 became readily apparent watching Zero in combat. On the ground, she's a menace with heavy spears and scythes. Zero can kick, spin, jump, dodge and chain combo attacks with her massive weapons to take down swathes of enemies. Combat moves at breakneck pace, allowing for a refreshing level of fluidity not often seen in Japanese role-playing games. Zero also has a companion that will attack alongside her. This companion won't ever die and is unable to heal Zero when she takes damage. Different companions will join her at different times on her journey.

In order to not break up the action, Shiba said the development team decided to have some dialogue — much of it important — run while combat is occurring. This works, as the action isn't broken up, but it does stretch players' focus in two directions. I imagine that as players become accustomed to combat, this break from the traditional JRPG use of story-delivering cutscenes between every few battles will become less jarring.

As Zero fights, she gets bloodier. As her clothes collect the red stains, a gauge fills up in upper left hand corner of the screen. When this Blood Gauge is full, it allows players to use Zero's Intoner ability — time slows down, she speeds up and everyone around her is destroyed.

Unlike previous Drakengard games, the dragon following Zero, Mikhail, is a baby. He's still pretty big, but his speech indicates his young age. Mikhail can be summoned into battle to spit fire — I watched him perch on a stone tower launching fireballs at my enemy while Zero frantically twirled around on the ground with her spear. Zero can also ride him and take combat into the air. While she's on board, Mikhail can use his fire attacks and stomp on enemies, as well as fly around areas. 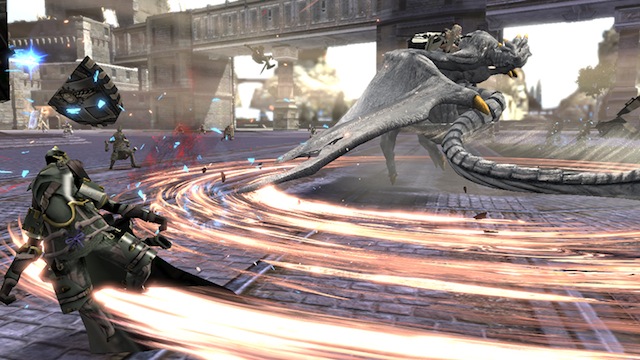 Previous Drakengard games have also been criticized for their mature themes — the original game included an incest plot and a character who liked to eat children. Drakengard 3 is rated M, and previous games have had some of this less kid-friendly content removed for their North American releases. Shiba said he realizes this might be an issue this time around as well, but the game is targeted at mature gamers who are familiar with Japanese role-playing games — criticisms outside of this target audience are just that, outside criticism.

But this mature content is what I found refreshing about Drakengard 3. Zero and the companion in the demo, Dito, bantered like randy adults, tossing around innuendos and curse words — one very nice use of the word "asshat" made me laugh — something you'd never see in Kingdom Hearts or Tales of games. Dito's major quirk was that he liked to watch people die, and his statements every time blood spattered the screen indicated this. The dark, cheeky humor won't go over well with everyone, but again Shiba affirmed that the game won't be everyone's cup of tea.

"We may keep the game as-is, with the exception of the dialogue — we may make some tweaks [for the North American version]," he said. "Our core users — mature JRPG players — want something authentic, they don't want any changes. As long as we don't upset our PR and Marketing teams or our European audience, we want to keep it authentic.

"It has been a problem in Japan before, too; it's been criticized every time," he added. "We're intentional with our content. This is a unique franchise that has a dedicated audience because of what it is. We wanted to keep it close to what it's supposed to be.

"We're aware that North America also tends to be sensitive, but again: we have to keep it authentic. That's what fans want."

Shiba added that if Drakengard 3 is successful, it could open doors for other JRPGs series in Square Enix's back catalogue. One in particular stood out in my mind: the underrated Valkyrie Profile series. Shiba, who worked on the games, said that even though the core market of JRPG players may be shrinking, it's not impossible to think we could see another Valkyrie Profile if the audience remains loyal to the genre — and vocal.

"The size of the market is shrinking but the cost of development is growing; it's hard to create a game just for JRPG audiences," he said. "But if Drakengard 3 is successful, the possibilities may open. Personally speaking, I would love to explore that."