Disgaea D2: A Brighter Darkness is too more of the same

Disgaea D2: A Brighter Darkness ground me down.

The latest entry in a 10-year-old franchise, Disgaea D2 is full of the same goofy humor and tactical combat as previous entries. Its cutesy, cartoon cast chases down a never-ending stack of goals, most of which result in grid-based strategic battles.

Despite its light-hearted, fluffy plot, Disgaea D2 manages to feel cumbersome. Its mechanics work splendidly at first, but the game repeats them over and over again, beating you over the head with the same tasks. Disgaea D2 is a long wave of one battle after another, and it left me begging for fresh air.

Disgaea D2 is the direct sequel to 2003's Disgaea: Hour of Darkness. Like its predecessor, the game takes place in a cartoonish version of hell known as the Netherworld. D2's anti-hero Laharl is working to spread his name as Overlord with the help of his vassals, Etna and Flonne. But Laharl's capabilities are called into question as tensions between the angelic realm of Celestia and the Netherworld begin to rise — a conflict that literally sprouts from angelic flowers spreading across Laharl's world. 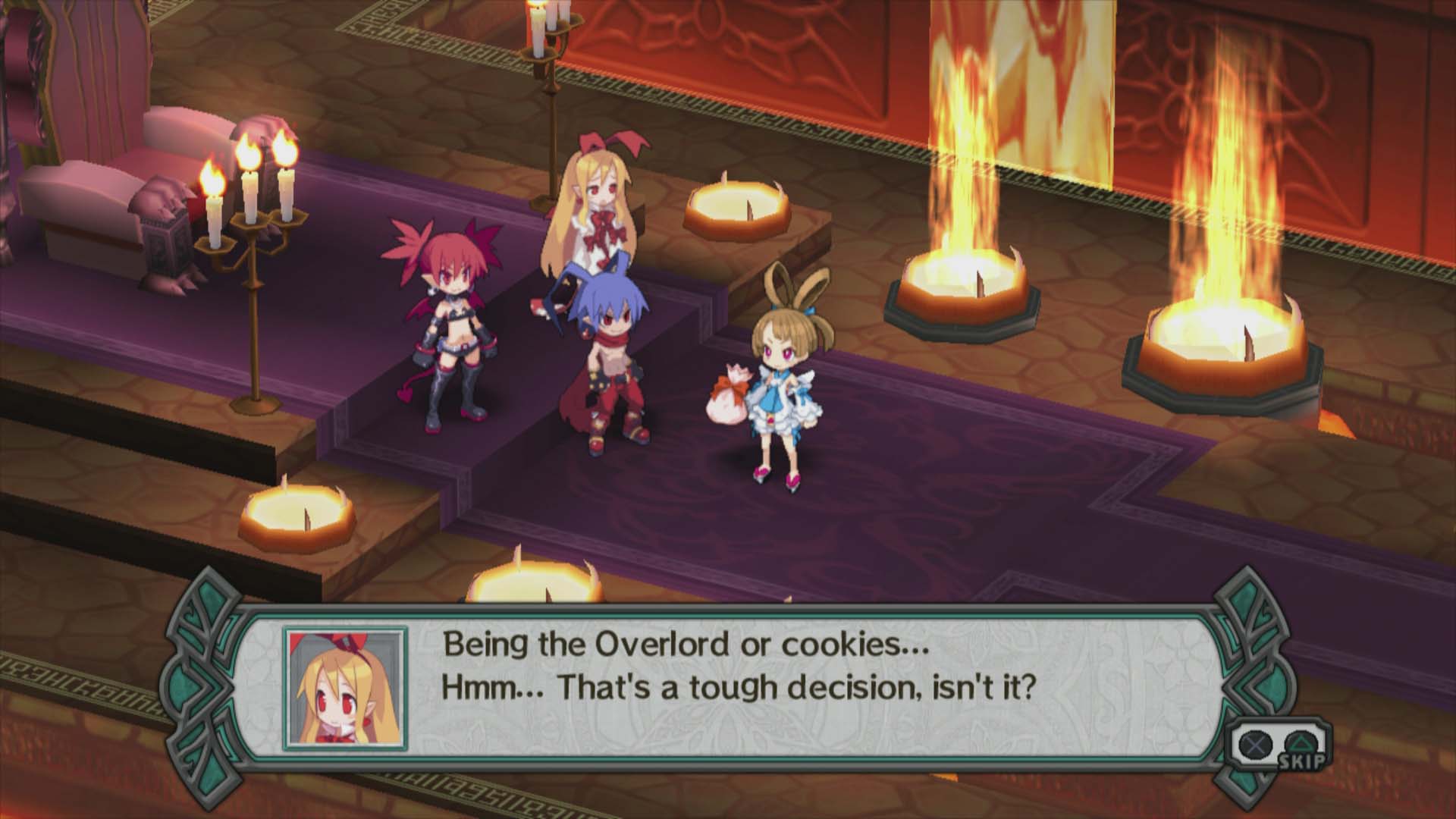 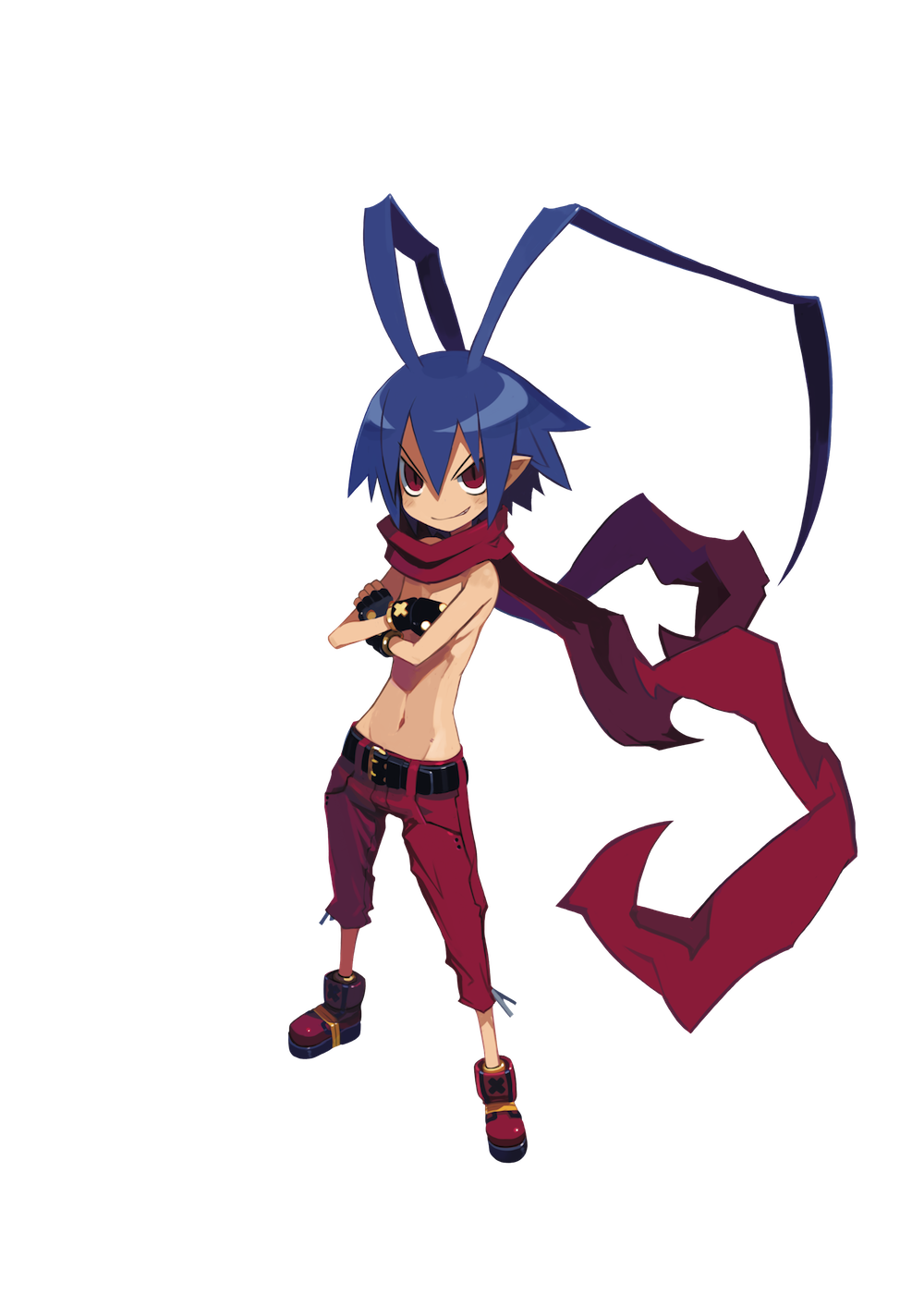 A Brighter Darkness explores the theme of family with a child-like simplicity. As usual for the series, it leans toward light-hearted comedy, but the jokes rarely rise above boring slapstick. The punchlines are delivered by painfully over-the-top, flamboyant characters that are hard to care about. 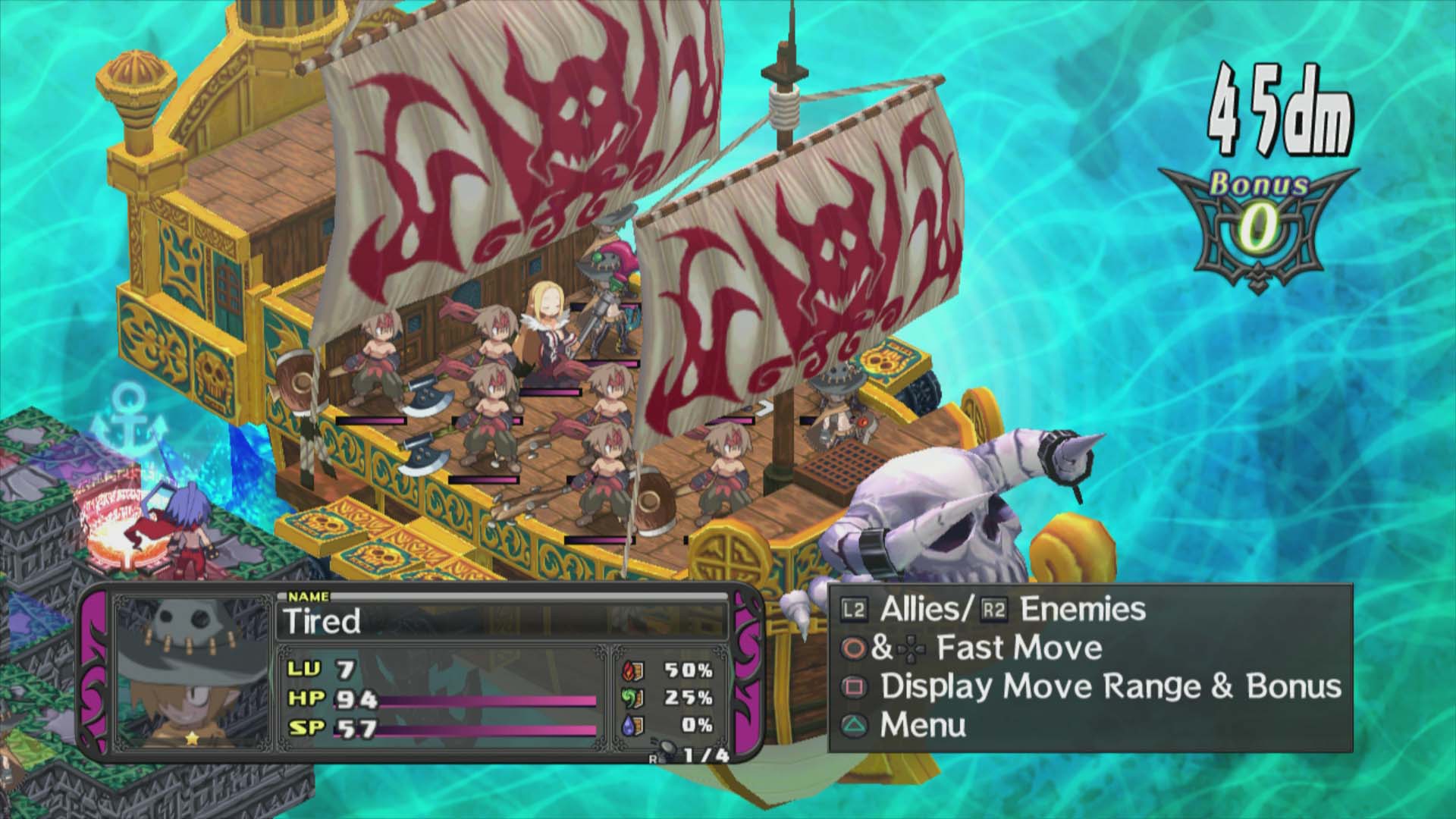 The game is best in the heat of battle as it wracks your brain with mechanics and strategy. Disgaea D2's story is split into different chapters with branching levels. There are a set number of units you can use in each battle, but you can pull characters from a base panel at any time. This made it easy for me to use units as bait or to arrange them for better attacks. A clever apprenticeship system also allows students to learn skills from their master character.

When exploited to its fullest potential, Disgaea D2's combat provides lots of satisfying options. Like its predecessor, it includes monsters in your party lineup, but humanoid characters can now also mount monsters in battle. This makes any pair into a formidable opponent and pushed me to recruit more monstrous allies. Throwing is another huge advantage — units can be lifted, stacked and hurled across the stage to reach more territory or bridge gaps. This becomes a fun, thoughtful solution to reaching faraway enemies or ferrying characters with low movement, and it requires planning and foresight that could greatly benefit other parts of the game. 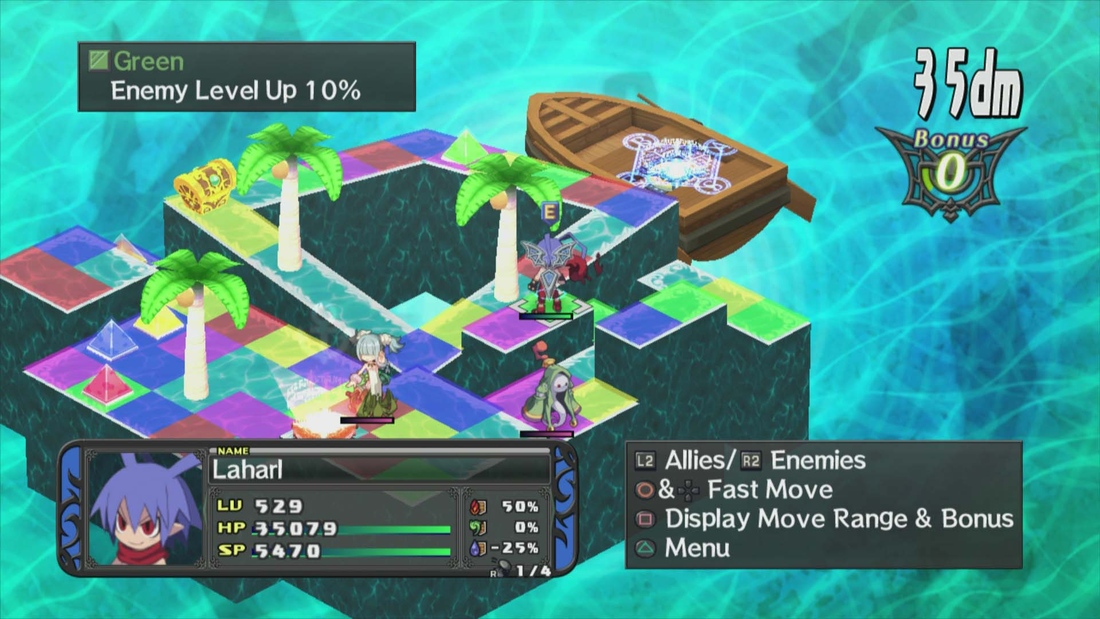 Foresight is a handy skill to have when dealing with the game's geo symbols — gems planted in each level that correspond to different colored squares. Each color carries a different effect, such as barred entry, invincibility or attack boost. By tossing or destroying gems, I could change properties or set off a chain reaction that wipes the board clean of status effects and rewards bonus points. I could also use their status effects to my advantage and turn otherwise tricky battles into a victorious sweep. 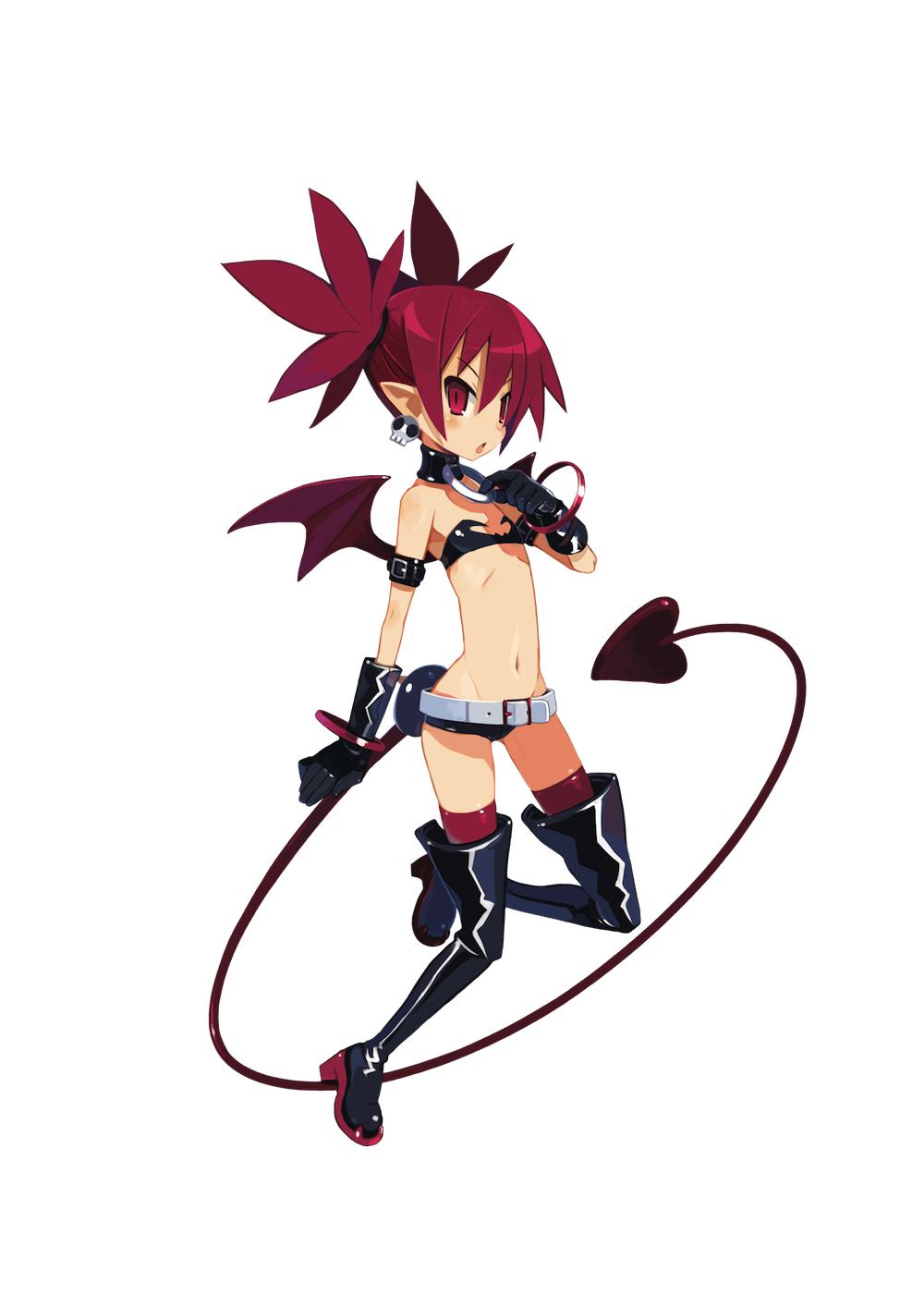 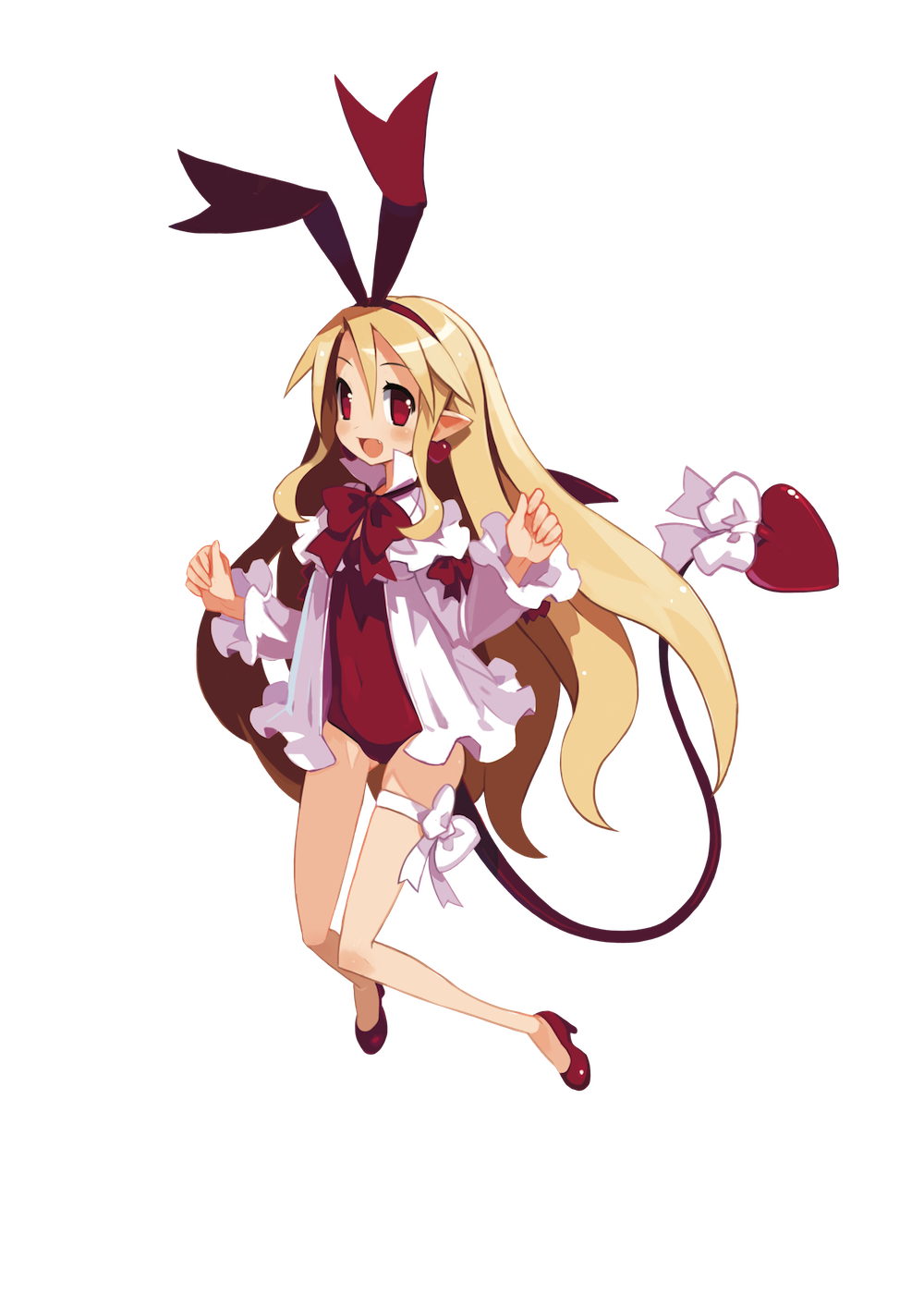 All of these systems could add up to something challenging and special, but I was rarely encouraged to explore them beyond my personal curiosity.

Most chapters include only a stage or two that require any mastery of Disgaea's various strategic elements. Attacking enemies only a few levels higher than myself was frivolous. It became clear early on that the highest level wins in most battles, and most roadblocks were answered by mindless grinding rather than smarter planning. Even when fairly matched in power, predictable enemy AI killed the need for me to think ahead; most enemies moved on the same path and used the same skills every time I restarted a map.

About a quarter of my time was spent in Laharl's castle on battle preparation. This home is mainly used for preparation through shopping or some basic stat training, but it also features an interesting, diplomatic mini-game: the Dark Assembly. The Dark Assembly lets you trade mana earned in battle for new characters, higher-priced items, new levels and much more.

Small character changes — like cosmetic tweaks — aren't a hassle, but most requests are put to a vote. Certain requests are more likely to pass than others — trying to extort money from the demon senators, for example, failed every time. I was able to bribe some senators into my favor by offering items, while others required a little roughing up post-vote. Even using shady techniques, I wasn't ever guaranteed to get my way. Whether it was a mundane plea for new items or the far more important task of adding a highly skilled character to my roster, every request was exciting and nerve-wracking. 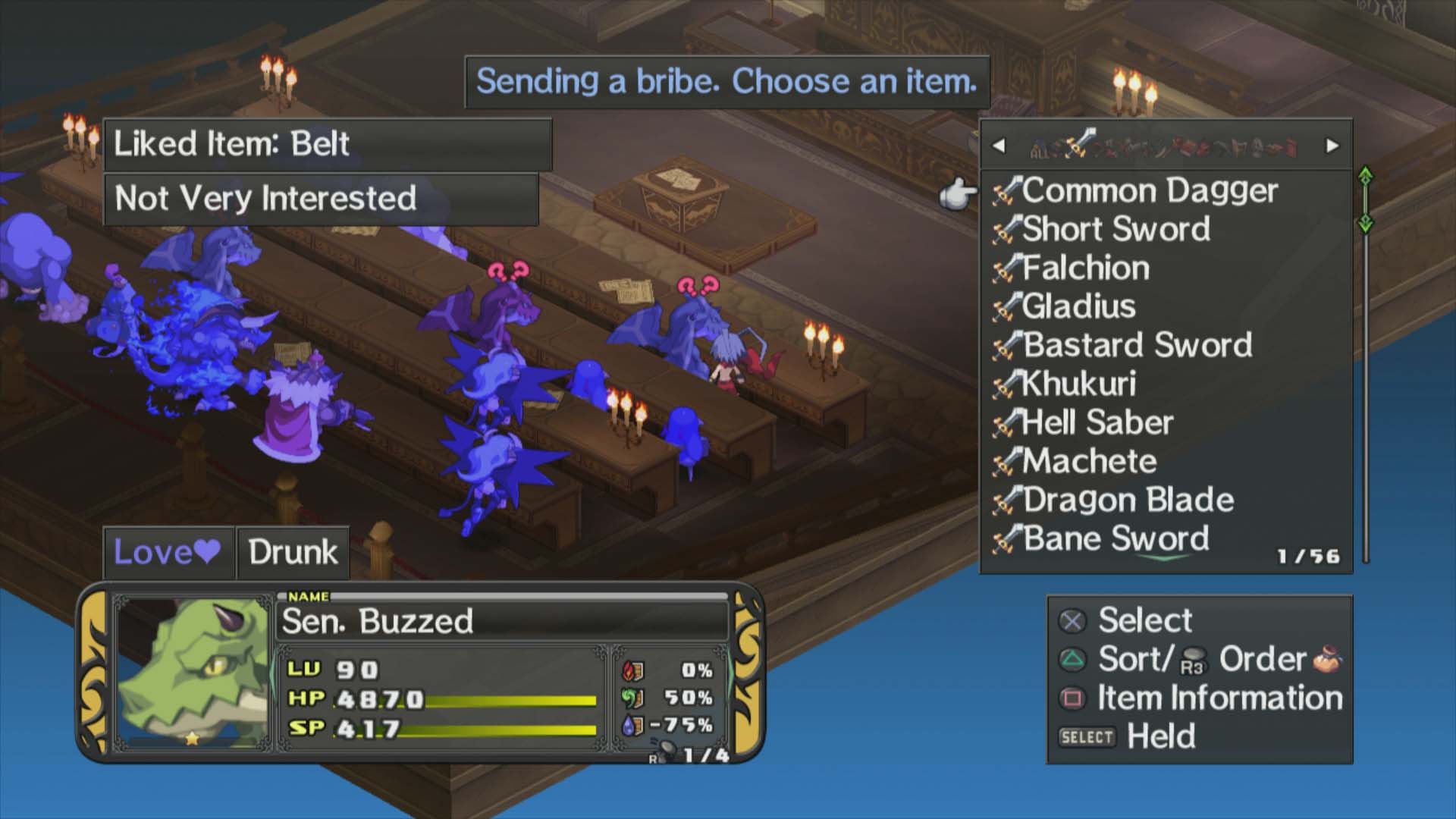 As you progress through the story, new classes and monsters are unlocked. There's a pleasing amount of variety to suit whatever tactical playstyle you want to pursue — tanks, mages and healers, as well as jobs that provide a mix of the three. As you level up individual jobs, quick promotions within that class add extra stat boosts.

The downside to creating new characters is that they start fresh from level one. This is particularly frustrating when really interesting jobs unlock late in the game. As much as I wanted to add those jobs to my lineup, the idea of grinding that new character to meet my party's standards was totally unappealing, especially given Disgaea D2's insane level cap of 9,999. I completed the game's main quest with party members in the 130-level range, and that still put me at a disadvantage for extra end-game challenges.

D2 has a lot to offer even after the story's finale. The game's item world — a separate series of randomized levels based on an item of your choosing — is, in essence, infinite. Side-chapters can be easily added through a vote in the Dark Assembly. But all of this bonus content suffers from the same problems as the rest of the game. For the few I explored, I was once again in need of high stats rather than strategy. Although I enjoyed the chance to play with a few late-game characters who I didn't use much during my main run, it still felt like more of the same.

Disgaea D2: A Brighter Darkness is too more of the same

Although its core elements of tactical strategy jibe well together, Disgaea D2: A Brighter Darkness is dragged down by its ad nauseam execution. The satisfaction I got from tailoring new characters to my liking was stripped away by the necessity to grind them up to snuff. And an immature story with eye-rolling jokes didn't help matters. Ten years is a long time to stray away for a sequel, and Disgaea D2: A Brighter Darkness doesn't wear its age well.

Disgaea D2: A Brighter Darkness was reviewed using a retail copy provided by NIS. You can read more about Polygon's ethics policy here.