It's a fitting sign of our times that, in a game which already contains zombies, aliens and robots, its designers elected to add not pirates or ninjas, but bankers

Review and information for XCOM: Enemy Within

I wanted to see if breaking out of the comfort zone of the "no hurry offense" style that works so well in Enemy Unknown would be an "aha" or more like an "oh no." Like writing with the wrong hand or typing wearing gloves.

Like a lot of people, I've adapted to Enemy Unknown's constant threat and mystery by being careful. My squad of soldiers, usually bolstered by a couple of hovering S.H.I.V. robots, would dilly dally its way across maps, finding cover, going "Overwatch," "Onnnn overwatch," "Moving to overwatch," and generally covering each other's asses well enough that should the spooky bad guys pop out of nowhere, the losses would be minimized.

Enemy Within asks you to play differently by design. And in introducing a new element, a new faction, and new choices, they've made a great game even better.

Almost immediately, Enemy Unknown introduces "meld," a multi-purpose enabler you can use to make your soldiers into cyborgs or alter their genes to make them invisible and other cool things. It's pretty useful, but it's short-lived. On any given map in Enemy Within, there will be two canisters of the stuff, and each will self-destruct after a certain number of turns. If you don't get it fast, it's gone forever.

Enemy Within's new soldier classes, enemies and weapons successfully add depth to the game's multiplayer experience. MECs with rocket boots and invisible snipers, among other additions, seem like they were custom-made for multiplayer, and add a strategic layer to engagements that could be the deciding factor in a tense match. It's tons of fun and you'll find yourself wanting to try again and again to find the best squad options.

And so, hurrying has entered the XCOM lexicon, which means taking risks, being reckless and moving soldiers forward across the map without five other squad members covering their asses. It would be a disservice to the game to underplay how much of a mental shift this change in tactics can represent.

Enemy Within is what Firaxis is calling a "Firaxis-style" expansion to Enemy Unknown, and I won't bore you with what they mean by that. The gist is that it radically alters the game. If this kind of expansion does its job right, it won't alter the game beyond recognition, but just enough that it will be better, or more interesting or more fun. And Enemy Within hits that mark dead center.

Meld enters the game like it was there the whole time. It's the missing link between the tactical, turn-based combat in the field and the deeper strategy game back at the base, which Enemy Within also revamps and reintroduces. Unlike XCOM's money resource, meld does only one thing: make your soldiers more badass. It's an advantage worth hurrying for, and once you have it, deciding how to spend what little you actually get feels far more meaningful than managing money and deciding whether or not to buy a $40 space jet, or selling a dead alien for a finsky.

The actual meld-bought upgrades also add some flair, both in terms of gameplay and expanding the narrative of this universe. To meld-up your soldiers for duty as MEC troopers, they'll go under the knife for a handful of days, during which time they will be unavailable for missions. When they emerge, their limbs will have been sawn off and replaced with metal. They can now wear MECs your engineers construct, and wield flamethrowers, grenade launchers, rail guns and misc. other large, ridiculous weapons. 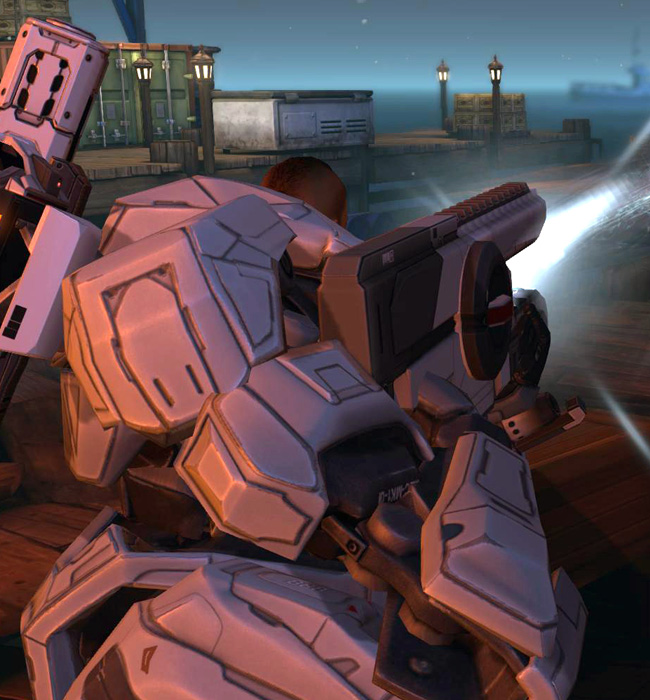 MEC troopers become, in essence, tanks, and can absorb more damage and inflict more pain. But their new robot hands are too clumsy for them to work things like medkits and they can no longer use cover. Plus, whatever class advantages they had before are gone. They will retain their rank, but their skills must be re-assigned to new MEC class skills. It's a tradeoff that yields some engaging challenges.

It's even more interesting when a MEC trooper dies, which leaves the MEC itself intact, ready for a new trooper after some repairs. How must that soldier feel? When I lost my first MEC trooper, I immediately changed the mech's paint job and tried to ignore that my new, different-colored mech was speaking in a man's voice instead of a woman's. It was a surprisingly haunting emotional touch in a game that tends toward sterile contemplation.

The alternate route for melding up soldiers is less physically radical, but slightly more creepy. You can send them to the gene lab to have their DNA spliced up to give them various super powers. These upgrades will not change a soldier's class or other abilities, and often prove useful. And there are enough options to make a minor enhancement or two beneficial to every class of soldier. I gave the leaping and invisibility upgrades to my sniper, making her a lethal weapon in almost every scenario. 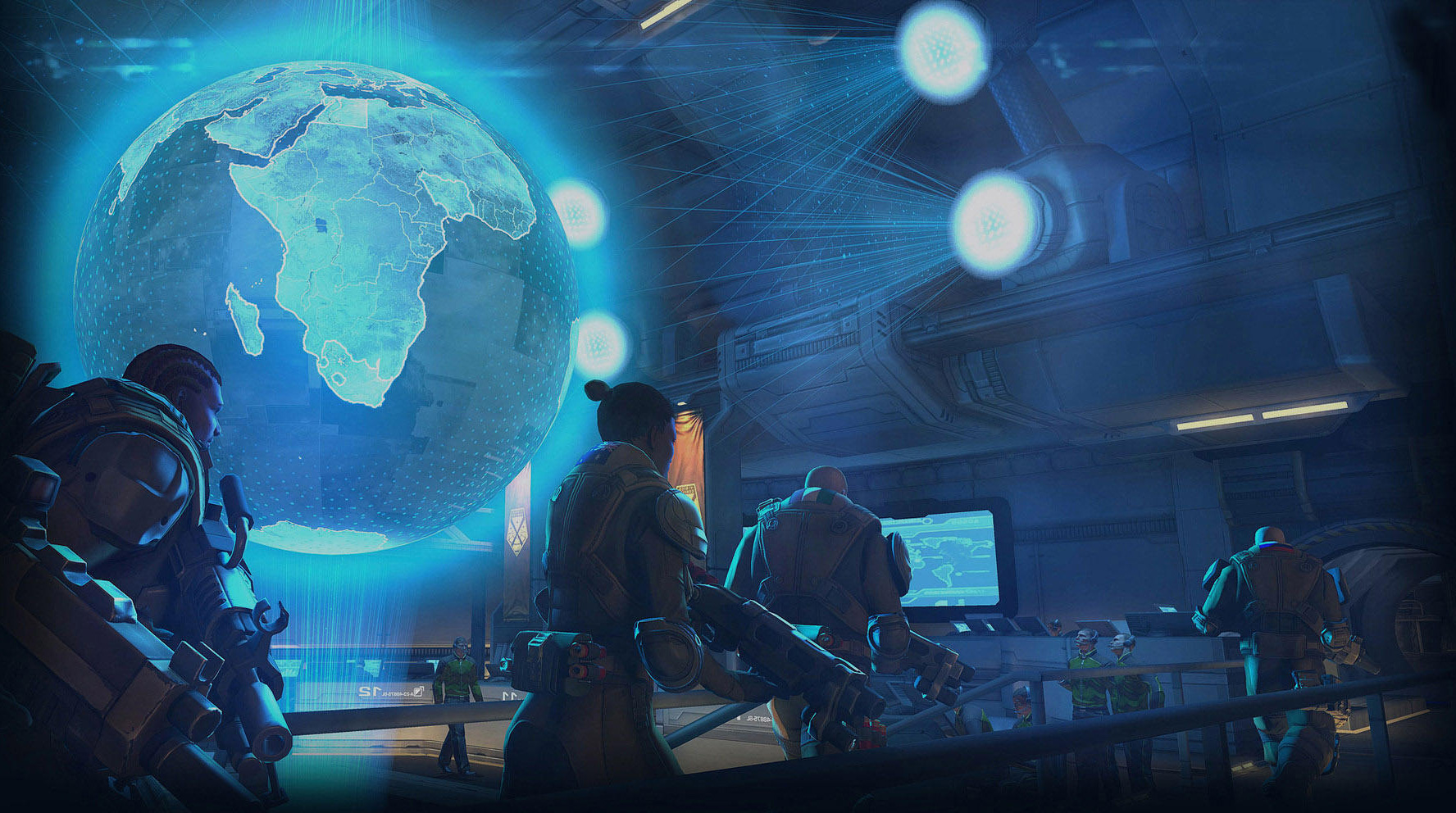 The beautiful art and UI design of XCOM, like a well-designed cocktail dress, obscures just enough of the complicated architecture underneath while revealing a tantalizing amount of detail at first glance. It is instantly obvious what goes where and how to make what happen. Once you start peeling away the layers, each step of the experience leads logically to the next and, ultimately, to a satisfying conclusion.

New enemies also add spice and cool new things to shoot at. On the alien side, there's a mech-ified Sectoid with dual-wield plasma cannons, and the Seeker, which is more or less like the squid-like enemies from the Matrix films, only it chokes you to death and is invisible. Once the Seeker latches on to a soldier, another soldier must shoot it off. This adds a bit of tension to the new focus on aggression, making it a good idea to at least stay paired up when running about looking for meld.

There is also an entirely new force, EXALT, the human counter-point to XCOM. EXALT is a stereotypical secret organization out to undermine XCOM for reasons only it knows. Instead of soldiers, EXALT operatives are seemingly businessmen in pinstripes and bandannas — the Sandinistas of the one percent. It's a fitting sign of our times that, in a game which already contains zombies, aliens and robots, its designers elected to add not pirates or ninjas, but bankers.

In addition to providing new bullet fodder, EXALT brings with it a slate of opportunities for new mission types. This includes new scripted missions that are fast-paced and engaging in a way few levels in Enemy Unknown could match, such as "covert operations," where you must assign a soldier from your barracks to infiltrate an EXALT base with only one weapon and no armor. When they have completed their mission, you may abandon them or send in a squad to extract them. The EXALT storyline itself could have provided more than enough fuel for a well-rounded expansion to XCOM. That it's just one part of Enemy Within is glorious overkill.

It's a fitting sign of our times that, in a game which already contains zombies, aliens and robots, XCOM adds bankers

But it all comes back to speed. Experimenting with the need to "hurry" in Enemy Within yielded favorable results. I didn't manage to kill off soldiers any more frequently than usual, and the new MEC troopers and gene powers proved shockingly well suited to a more aggressive style of play. I even discovered that some of the old standard soldier classes really found their niche when playing more aggressively. The support class, for example, proved a rockstar with the optional "sprinter" ability in maps where I allowed my soldiers to spread out. He could toss smoke to cover an advance and then hustle over to help revive a fallen comrade on the other side of the field. When I eventually lost him after 34 missions, it was all the more poignant for having seen him finally reach his full potential.

Small changes in Enemy Within make it easier than ever to relate to and like those characters, such as new, ethnicity-appropriate voices. In Enemy Unknown, it didn't matter where your soldiers were from — they all sounded Californian. In Enemy Within, your Mexican soldiers speak Spanish. Russian soldiers speak Russian, and so on. This made for some occasional unintentional humor as my soldiers raced around the map uttering enthusiastic replies I couldn't understand, and the change adds welcome flavor to what had been before an awkwardly Amero-centric affair.

Similarly, additional maps make flying "into the heart of Africa" or "on the German border" and landing at the same gas station you just saw in Mexico less likely. And new mission types make some of the original maps feel more alive. In Enemy Unknown, the lethality of the Chryssalid enemy in the blown-up military base previously used for "terror attack missions" made exploring it a lower priority than escaping alive. But the structure of the map is fun for more than waiting to die and return as a zombie, and it was refreshing to explore it. 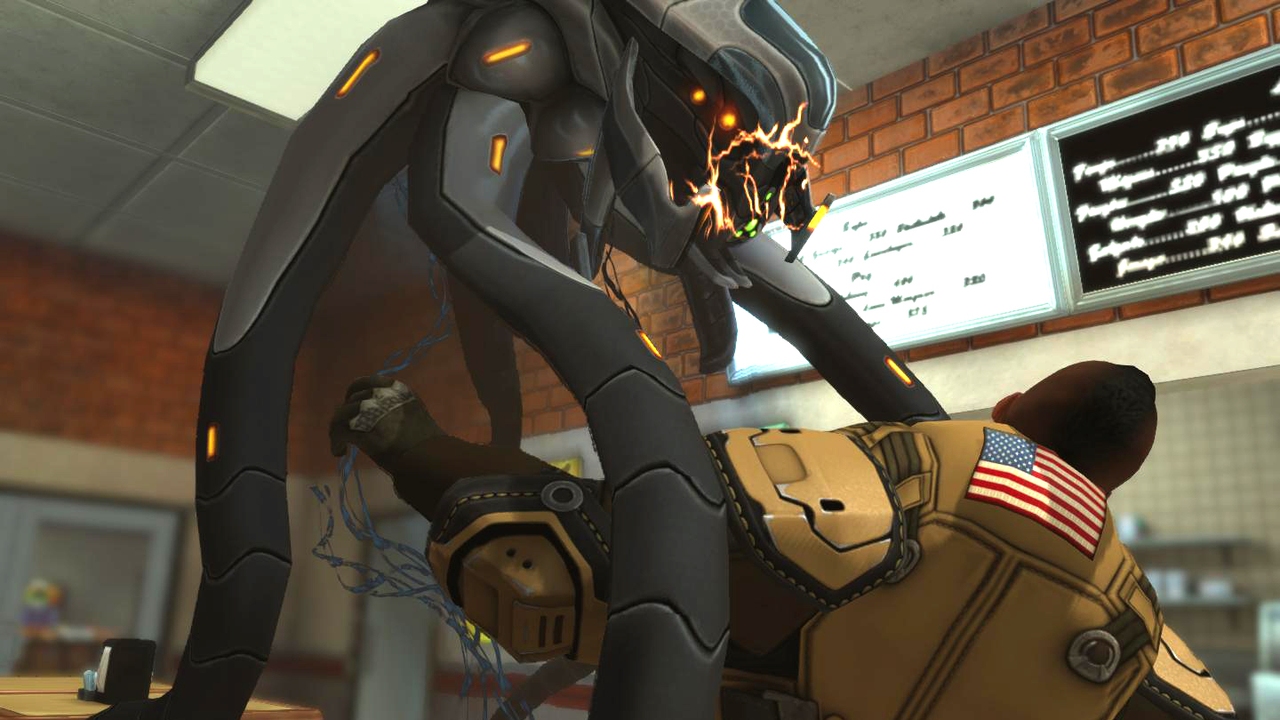 Speaking of terror attacks, Enemy Within's new emphasis on hustle inspired me to try my hand at being more aggressive when attempting to stave off the Chryssalid. The experiment yielded mixed results. In my first attempt two of my soldiers were surrounded on a boat while the rest explored other parts of the map. The mission devolved into a full-on retreat, as my squad attempted to converge on the extraction location while covering each others' retreats. Two soldiers died, everyone else ran out of ammo and my squad barely made it to the extraction point before being overrun by Chryssalid and zombies.

The second attempt went slightly better, but I still lost soldiers. As an Assault soldier raced around rescuing civilians, the rest of the squad attempted to draw fire. When a Cyberdisc appeared from over the top of a building, one of my soldiers fell and lay dying. The Support trooper waited in cover to race in and revive her, while the Heavy took up a flanking position and the MEC trooper rushed the Cyberdisc to try and distract it. A lucky critical shot destroyed the 'disc, which fell on top of both MEC and dying soldier, killing them both. It was the end of the battle, and a win for the team, but it was a wrenching level of intensity I would not have exposed myself to had I not been taking the risk in the first place. And in the end, I saved more civilians than I had ever done before.

Enemy Within forced me outside of my comfort zone, but provided enough reward for doing so that it became a continuing source of enjoyment. On the whole, Enemy Within plays like someone, somewhere kept a list of every minor thing they imagined, while playing Enemy Unknown, would make that game better  and then made those changes.

Our review of XCOM: Enemy Within 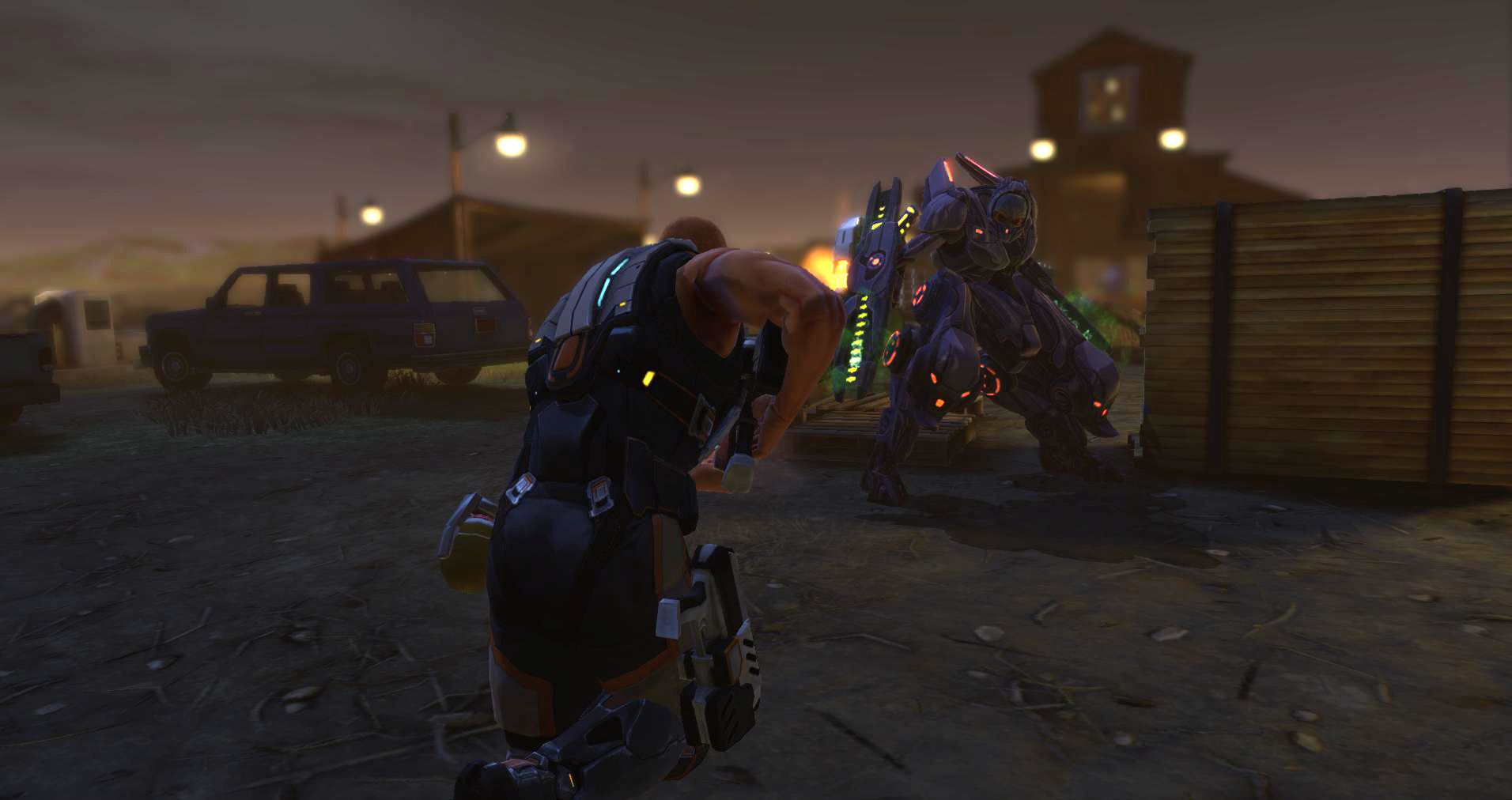