You have to feel for Booker DeWitt.

The star of BioShock Infinite has been jerked through multiple timelines, countless realities and more than his share of tragedy. Now, he's been dunked into underwater dystopia Rapture for Burial at Sea, the first narrative follow-up to his adventures in the floating city of Columbia.

This surely raises plenty of questions for our hero, but I hope he's not looking to me for answers: After finishing this first half of a two-part adventure I believe I'm even more lost than when I started.

Like a classic noir tale, Burial at Sea begins with a dame asking a detective for his help. This dame, however, happens to be Elizabeth, DeWitt's companion from BioShock Infinite. She doesn't recognize him, of course, in fact, she seems downright surly as she asks his help in locating a young girl named Sally.

DeWitt has been mysteriously transplanted from the beginning of the 20th century to the middle of it — specifically to December 31, 1958, just hours before Andrew Ryan's libertarian paradise falls to the chaos seen in the original BioShock. This provides a new look at Rapture in its heyday and it's as beautiful, grandiose and unnerving as you would hope. 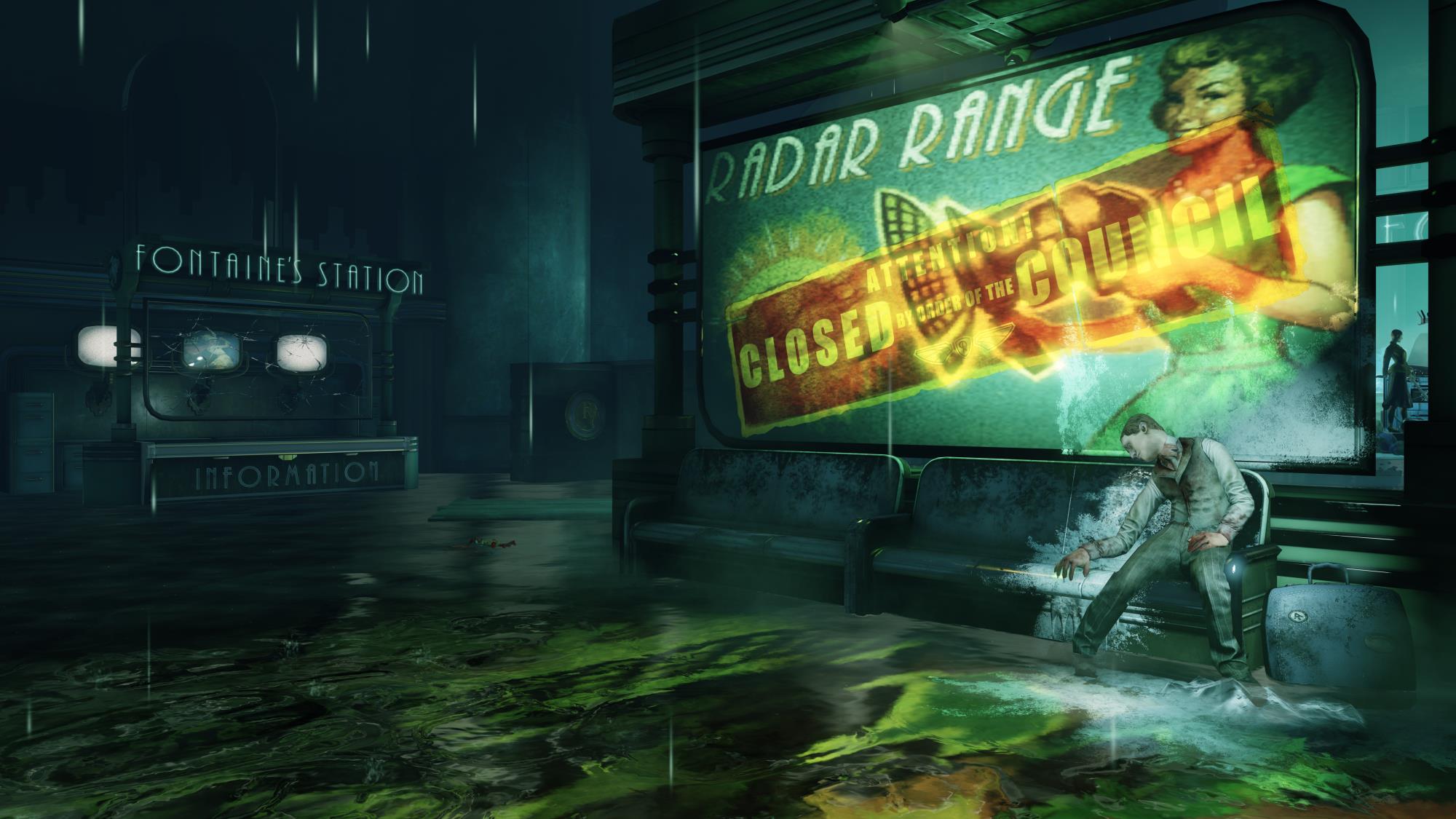 This Rapture pulses with energy, with a vibrancy that seems out of place to those of us who've only seen it in ruin. Monuments to casting off government control abound, works of art are held up as something akin to religious icons, and people pursue lifestyles and relationships that would have been beyond taboo on the surface (as indicated by both the gay and interracial couples that populate the city). In short: This is Rapture working as intended, made all the more ominous by the player's knowledge of exactly how far it's all about to fall.

this look at unblemished Rapture is all too brief

But make no mistake: The cracks are beginning to show. The careful observer will catch fragments of conversations wherein the wisdom and fairness of Ryan is called into question. A smuggler named Fontaine has been mysteriously banished. And, in his private studio, Sander Cohen's depravity is starting to make itself known.

Unfortunately, this look at unblemished Rapture is all too brief; DeWitt is soon shuffled into an abandoned corner of the city where we find the disrepair we're accustomed to.

This is also when the killing begins. 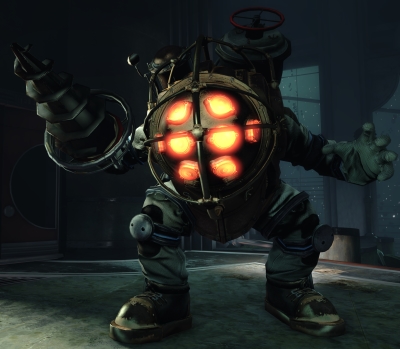 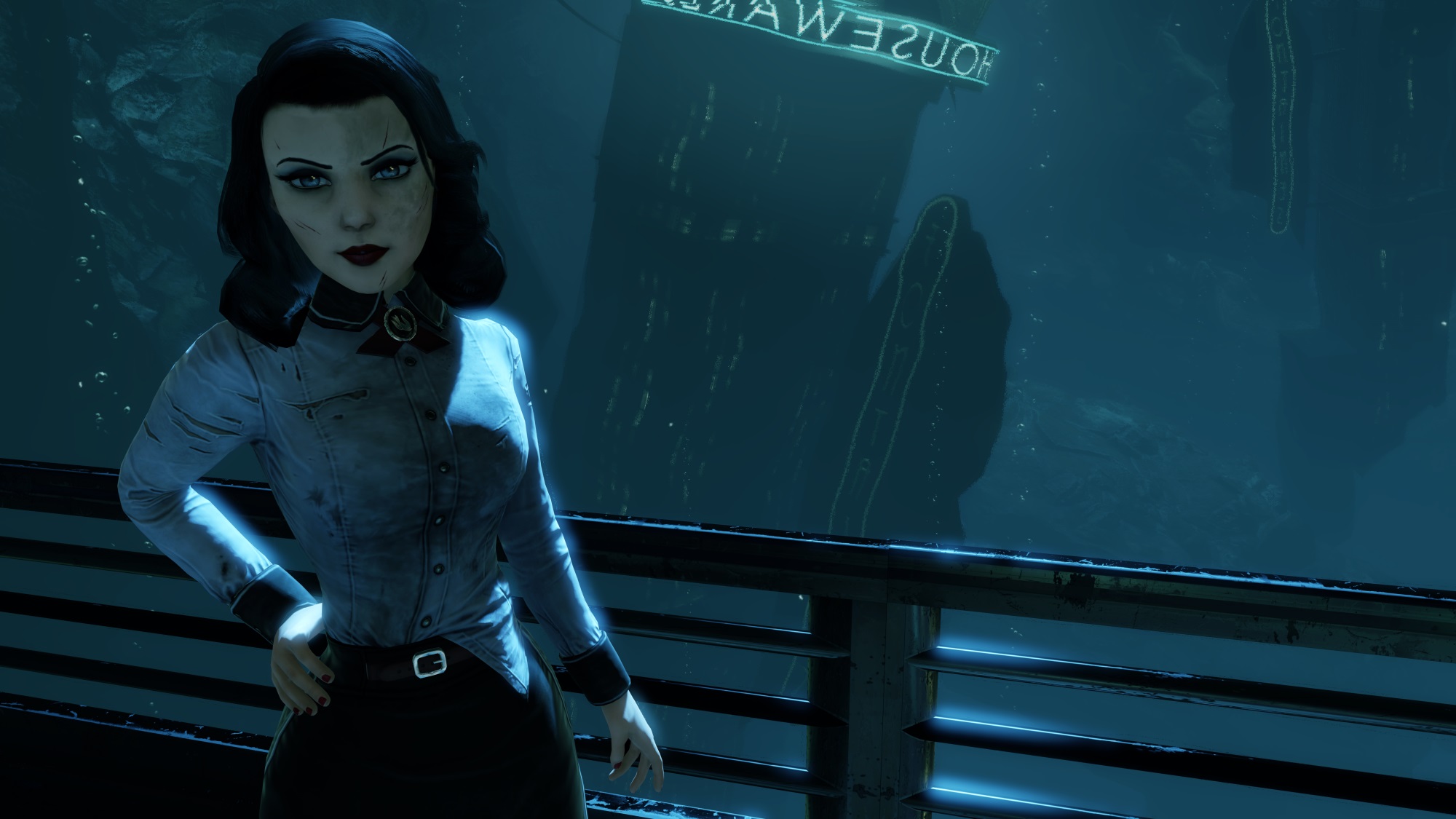 BioShock Infinite immediately disoriented me as it disorients player character Booker. There's a clear effort to play with any expectations of setting and content through moments of humanity and horror, wonder and ugliness. Irrational quickly establishes some basic ideas of what the world of Columbia and BioShock Infinite is. Almost as quickly, it peeled at the edges of my understanding of that world. Pop culture references and vague allusions to preconceptions formed from past games in the franchise create an uneasy tension, but more importantly, this atmosphere made me desperate to search everywhere for any hint of an explanation as to what made Columbia tick, how it got where it was and where it was going.

The world that Irrational has built is one of BioShock Infinite's greatest assets. It's also inextricably tied to every other part of the game. This might be in part because Columbia is still functional when you arrive — it isn't a wasteland reminder of a golden society. Most shooters and first person games are content to send you into the ruins of a society in some kind of bizarre archaeological expedition. Columbia begins BioShock Infinite in the midst of its Gilded Age, with disconcertingly shiny, happy people milling around

I was more confused than I was by the end of Infinite, and that is saying something

Burial at Sea's combat is structurally very similar to its predecessor's. Magic powers (called "plasmids" in this reality instead of "vigors") are available with a press of the left trigger and a variety of guns are on the right. There are environmental hazards like water puddles and oil barrels that can be exploited with plasmids, but I found myself (as in BioShock Infinite) finding a plasmid/weapon pairing I was comfortable with and rarely deviating.

That said, there are some advances in Rapture's technology. A new ice plasmid and a super-heating oven gun are introduced to the mix, and, in perhaps the best change, Booker is able to carry his entire arsenal at once rather than adhering to his two-gun limit from Infinite. Some new gear is also available to equip. 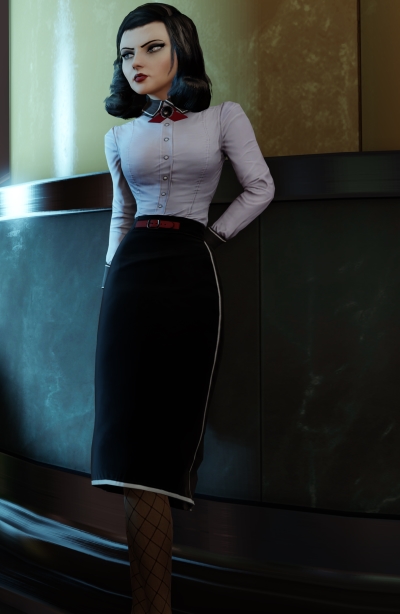 Fights are on a smaller scale than the armies Booker took on in Columbia (a welcome change) but that's not enough to make fighting feel fresh. Smaller environments also make the rail-riding Skyhook tool (called an "Air Grabber" in Rapture) feel totally extraneous.

Since combat doesn't offer much in the way of new experiences, Burial at Sea must find other ways to validate its existence. Sadly, the noir tone promised by the introduction doesn't fit that bill. Despite the promising introduction, the pastiche disappears as soon as the action kicks into gear, giving way to familiar combat rhythms.

While the story of the search for Sally should be intriguing, it's delivered largely with ambiguity and teases until the literal last minute at which point a giant bucket of baffling reveals is dumped on Booker (and by extension, the player). I was more confused than I was by the end of Infinite and that is saying something.

The countless parallel realities introduced by Infinite remove so much weight and continuity from the narrative. The nature of BioShock Infinite's inherent... well, let's say multiplicity, made it darn near impossible for me to get emotionally invested in this single pairing.

All that being said, if you're simply desperate to return to Rapture, to explore all the dystopian nooks and crannies you've previously been barred from, Burial at Sea will scratch that itch. It's a gorgeous, haunting two-hour tour of a world I can never get enough of, and if you're willing to judge Burial at Sea solely as virtual tourism, it's beyond reproach.

The return trip to Rapture is welcome, but Burial At Sea's first episode is confusing

As I said, Burial at Sea is part one of two, and perhaps the forthcoming second half will throw the first half into such stark relief that my puzzlement will be laughable in retrospect. But for now, I'm happy for my additional time in Rapture and devoid of a solitary clue of what I was doing there in the first place.