Here's how we'll play, pay, talk and more with the PS4 (update)

Share All sharing options for: Here's how we'll play, pay, talk and more with the PS4 (update)

The PlayStation 4's user interface looks more like something you'd find on Facebook than on a next-gen gaming system. And there's nothing wrong with that.

Gone is the PlayStation 3's iconic cross-media bar, replaced now by an amorphous "dynamic" menu that evolves to reflect your and your friends' gaming habits.

In a user interface demonstration this morning at Sony's PlayStation 4 event in New York City, Eric Lempel, vice president of business and operations for Sony Computer Entertainment America, walked us through the PS4's new organic look.

The first view that a gamer will see on their PS4 is an endless horizontal row of tiles reflecting the experiences a person had on their console in chronological order. So if you download or play a game, you'll see it there.

Next, Lempel walks us through the What's New screen, a sort of Facebook timeline for PS4 gamers. It's here that players will see what their friends are playing, streaming, liking, doing. Players can also add video and screens directly from the console to Facebook or upload screens to Twitter.

"It's all about being connected and discovering things," Lempel said.

"We're making it as easy as possible for consumers to get at content fast."

If you see something a friend is playing that you want to check out or buy, you can hop directly into the store from the stream.

"The store isn't an application like it is on PS3, it's a standalone entity that's basically native to the system," Lempel said. "You can tell that the store looks a lot like the current PS3 store we launched last year. We've taken everything we've learned from that and we've improved it."

The store has a "showroom feel" to help highlight the content, Lempel said. "We're making it as easy as possible for consumers to get at content fast."

The store and system also feature a new "PlayAsYouDownload" feature that allows gamers to start playing a title before the game finishes downloading. Players will typically decide if they want to start playing single-player or multiplayer first and start the download, a few minutes in they'll be able to play.

With Killzone: Shadow Fall, for instance, players download the first two levels of the single-player game and then hop into the action.

"Either way it's going to download a fraction of the game to get me into the game as fast as possible," Lempel said. "If I want to start at single-player and get used to the game, I click on that, it'll download just a piece of that, and I can start playing. Then it will continue to download the rest of the game, including the multiplayer mode.

"You won't have to wait or lock up the system to install games. That all happens in the background."

That ability to get content onto the console quickly is also tied to the system's standby mode, which will wake up automatically to download content you buy while on visiting the PlayStation Store from other devices.

"So if you're out and about, you learn about a new game, you're in the office and you know you want to play something when you get home, it'll do that instantly," he said.

Painful firmware updates are a thing of the past

If you have a PlayStation Plus membership, the system is also constantly looking for patches you might need to update games you already own.

"In terms of automatic updates, all your patches and firmware will be updated automatically when you turn it on," Lempel said. "There's a little bit of a difference from the way we do this on PS3. Patches will be available to Plus members when the console wakes itself up. Patches for non-Plus members will start to download as soon as you turn your console on, no matter what you're doing. So if you turn your console on to play Killzone, but you've got Call of Duty and Knack, and those have to be patched, those will start to be patched instantly in the background. That makes for a much better user experience, unless you happen to launch a game that you didn't catch the patch the last time you were online, you'll have to wait.

"Besides that, it should be pretty seamless to the user."

During a later demo, attending press were walked through a number of the system's menus showing off everything from how guest accounts are handled to parental guidelines. 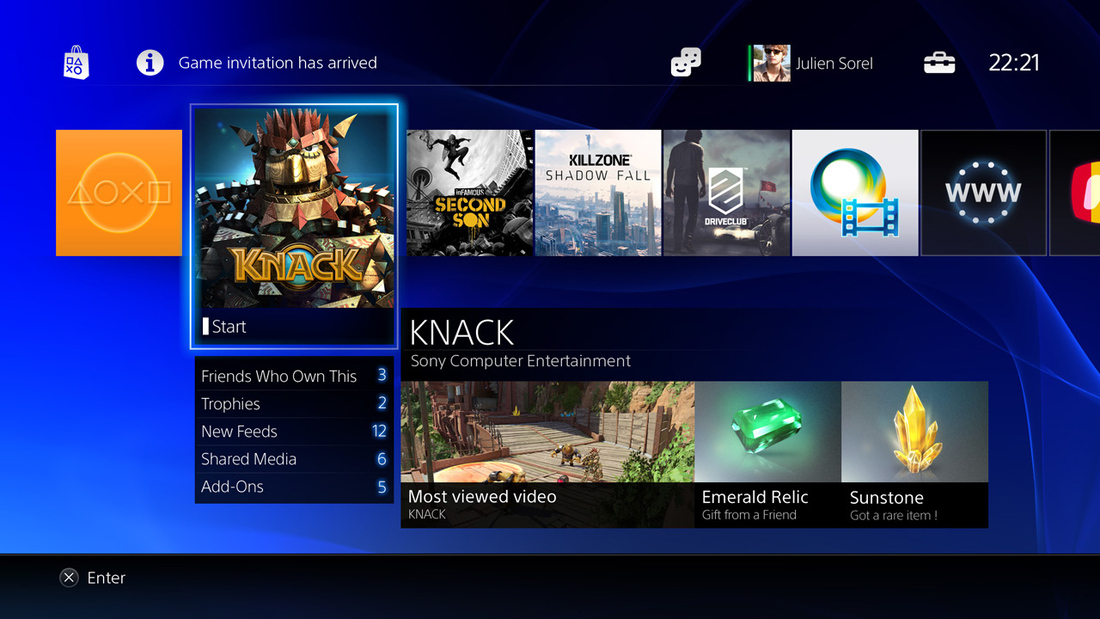 Guest accounts are designed to allow someone visiting to sign in with all of their PSN info and instantly get access to the content they purchased. When they sign out, all of that information is deleted.

The friends limit has been increased to 2,000 for the PS4 and there is now the ability to display your real name. (Facebook is one of the authentication methods.) But if a friend wants to show your real name on his or her list of friends, you will have to individually authorize it.

Players can sign into an account automatically using face recognition. Once a face is recognized a player has to either hold up a controller to confirm the sign in or, oddly, tilt their head to the side.

Voice commands are also supported by the console allowing you to launch any app by saying, for instance, "PlayStation, launch Killzone." Players get the system's attention by clicking on the left trigger.

Trophies have also been optimized for the PS4. Now the system shows a player the rarity level of their trophies, rating them from common to rare to ultra rare. It also tracks what percentage of people have each one.

While the PS4 has a robust set of parental controls, which includes the ability to whitelist titles, it doesn't have any time management or curfew settings.

The console's standby mode now includes the option to charge a DualShock 4 controller even when the system is suspended.

Finally, our demo showed off the ability to quickly swap between the last two applications you were using by simply double tapping on the PlayStation button.

Update: After publishing this article, Sony contacted Polygon to let us know that "the information provided yesterday was incorrect" and that, as it is today, "Sub accounts can’t be upgraded to master accounts on any PlayStation platform."

When pressed for additional detail as to Sony's plans to provide this oft-requested feature, a representative said, "We don’t have any additional comment at this time."

The original section of the story detailing what we were originally told is saved below:

Good news for those of you who created a PlayStation Network account while under the age of 18: Until now, you've been burdened with a "Sub Account," created under a so-called "Master Account." Sub Accounts could only use the payment options associated with the Master Account and, despite the inevitable forward progress of time, and the knowledge that nearly 100% of underage users who signed up for Sub Accounts would one day become adults and capable of managing their own purchases, Sony wouldn't allow users to convert accounts.

"Once a sub account is created, it cannot be changed to a master account even if the account holder becomes older than 18 years old," Sony's support page still says today.