Share All sharing options for: Doki-Doki Mail lets you send cute messages to your PS Vita, PS3 and PS4 friends

The folks behind quirky adventure game Doki-Doki Universe are bringing a little bit of their playful world to mobile phones later this year.

Set to launch alongside the December release of the PlayStation Vita, PS3 and PS4 game, Doki-Doki Mail is a "way for people who aren’t maybe playing the game, or have friends who aren’t aware of the game, to share some content and have fun," said Alexa Lee, executive producer for the game.

Doki-Doki Mail is a mostly-free, silly little Facebook messaging app that people will be able to get for their Android or iOS devices come December. The app allows people to quickly type in a message and then add little Doki-Doki-themed animations to the email to match certain words.

For instance, when Lee typed in "Hi, want to go get sushi tonight" it added five in-line animations to the message.

Next to the word "Hi", the app added a picture of a guy waving hello. Next to "want" was a picture of a grabbing robot. The word "go" had an animated canon, fish showed up next to "sushi" and "tonight" was illustrated with a person standing in front of a starlight backdrop. The words remains with the animations next to them. 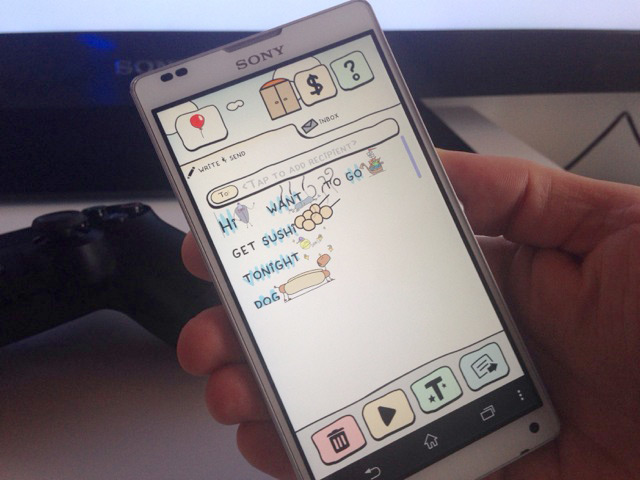 The app requires a user to sign into Facebook and then uses a person’s Facebook friend’s list to message through the service. The same is true of mail that can be sent from the Vita, PS3 or PS4. In all of those cases a Facebook sign-in is required. The app, though, doesn’t require owning the game or having a PlayStation Network account.

The free app will come with a "fair few" number of animations, in the hundreds, Lee said. Players can also purchase a Mega pack which gives them all of the animations from the PlayStation game for about $2 and can buy individual theme packs for about $1 each.

Currently, the only way person can receive a message is either with the game or the app. It won’t support PC, though alerts for the messages you receive will show up in Facebook.

"I’d love to include PC support," Lee said. "We had a version that did that, but we wanted to start with a targeted approach to get the best experience."

Lee, who was at the Sony event in New York City to show off Doki-Doki Universe on PS4, said that there’s not much difference between the PS4 version of the game and the ones running on PS3 and Vita.

"If you look at them side-by-side the PS4 version looks nice and clean," he said. "It’s smoother and runs at 1080p and 60 frames a second.

"It has a really nice flow."