Share All sharing options for: Game about Iranian Revolution comes to Kickstarter

You can hear the crowds chanting. There's an undeniable energy and sense of conviction in their voices. The voices of the crowd emanate from the iPad. The screen shows emotive and painterly comic-like animations of groups of Iranians being whipped into a frenzy. There are people standing on cars. There are people making demands. There's the sound of bullets. Then, there's chaos.

iNK Stories' 1979 Revolution aims to put players in the crowds and protests that took place in the year when Iran experienced an Islamic revolution. It was a revolution that would forever change the country, resulting in the overthrowing of the Pahlavi dynasty and the formation of an Islamic republic under the Grand Ayatollah Ruhollah Khomeini. 1979 was a period of immense change, of confusion and conflict. It's a period that iNK Stories wants to explore through a video game.

"... if someone shoots at you, what would you actually feel?"

The studio, led by Navid Khonsari — an Iranian-born American who has worked on games like the Grand Theft Auto series, Max Payne, Manhunt and Alan Wake — first announced 1979 Revolution last year. At the time, Khonsari spoke to Polygon about how the government-controlled Iranian media had branded him a spy because of the game. Today, the studio has a completed prototype and is ready to begin full production of the nine-part episodic series. It launched a Kickstarter campaign this morning to raise $395,000 to fund the development of the title.

During a demo of the game shown to Polygon, Khonsari explained that 1979 is a mix of world exploration, minigames and decision-making through dialog trees. Through these interactions, players get to know the game's characters, gain an understanding of what was going on at the time and experience some of the excitement, the recklessness, the fear and the panic that young revolutionaries may have felt.

In one of the more intense situations we encountered, we had to try to stop a friend from bleeding out after he was shot at a protest. Khonsari showed off the game's intuitive touch controls by using a pinching motion to open the character's shirt, a rubbing motion to wipe away blood and holding a finger to the wound to apply pressure to stop the bleeding. In another suspenseful scenario, our character was caught by a soldier with a cassette tape in our pocket. Cassette tapes were considered contraband at the time. We then had to try to talk our way out of the situation. 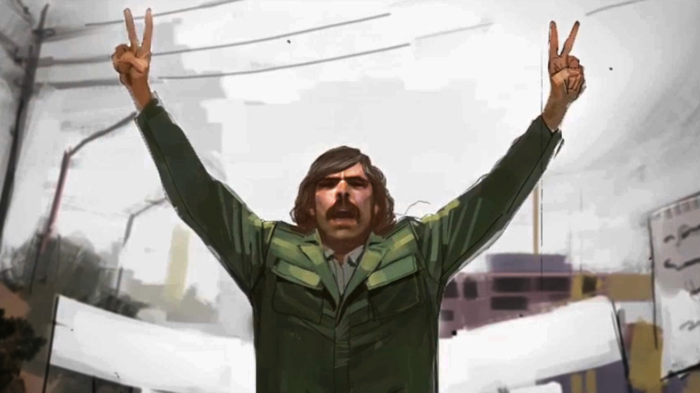 But there are lighter moments, too. The characters talk to each other about music. They take cheap shots at each other. We get to meet their families. We hear them talking about food. We get to see that they're just normal people with the same bad haircuts and clothing that Americans wore in 1979. Players will spend time with them as they develop film in the dark room. Players will help them barter as they shop at the bazaar.

"My goal is to make the unfamiliar familiar," Khonsari told Polygon. "So we have our main characters who basically have regular conversations that a bunch of young guys would have. On the other hand, I'm not creating a shooter, but I love the concept of suspense within a game. I think shooters naturally put you on edge because it's kill or be killed. I wanted to bring that element of suspense to this kind of game."

According to Khonsari, instead of making the character a heroic alpha-human who, when shot at, picks up a gun and runs into the crowd, the main character is more rooted in reality. "So the idea is, if someone shoots at you, what would you actually feel?" he said.

"I think everybody has a revolutionary inside them..."

The episodic series will follow the character as he transitions from a naive, excited and reckless man on the streets to becoming a revolutionary and later an enemy under the new regime that comes into power.

The story is personal to Khonsari. He was 10 years old in 1979. He remembers his grandfather walking him through the streets of Tehran as protests were taking place. He recalls being in awe of the tanks rolling through the streets. After the revolution, his family moved to North America. Khonsari tells Polygon that the game doesn't exist to educate or to choose sides. He simply wants to tell a story, and in that story he wants to communicate that not everything is black and white.

"I think it would be awesome to break down this barrier of how that part of the world is so unfamiliar, and yet at one point we were very, very familiar with one another in terms of the things we loved, whether it was music, pop culture or film," he said. "I think everybody, regardless of whether they're young or old or male or female, I think everybody has a revolutionary inside them. And by that, I mean I think everybody believes they can make a change.

"I felt that. I think it's an amazing feeling: that excitement, that possibility of bringing change. I want people to understand how these changes come about; how they are warped and how what you fight for isn't necessarily what you get. I want people to experience that excitement, that recklessness, and then becoming a little more mature and realizing that everything you did is not actually going to pay off. I think those are amazing experiences to provide as a form of entertainment."