Dead Rising 3 and the return of Mega Man X

Share All sharing options for: Dead Rising 3 and the return of Mega Man X

Players who complete Dead Rising 3 will unlock a special Mega Man X outfit. Those who manage to finish the game in Nightmare mode get to play with the X-Buster, Mega Man X's ferociously useful primary weapon. The video below shows its effectiveness against zombies.

Publisher Capcom has always seeded its Dead Rising games with self-referential celebrations of its own heritage. The original game, back in 2006, offered a Mega Man outfit and gun for special zombie-slaying achievers.

Dead Rising 3, which launches on Xbox One on Nov. 22, is no exception. As well as the Mega Man X tribute there are also several celebrations of all things Street Fighter, including a 'Shoryuken' Dragon Punch attack using a boxing glove attached to a motorcycle engine.

Of course, Dead Rising 3 is big on strange combinations, throwing bizarrely jimmied weapons and cultural references together with almost alarming abandon. But here, in the tongue-in-cheek world of walking dead goofiness, just about anything is permissible.

"Dead Rising is one of those games where parody is baked into the DNA," said producer Mike Jones. "It's cool to be able to leverage other Capcom games as well as just putting stuff in the world whether it be vehicles or weapons. It works well."

This game, just like its two predecessors, places a male protagonist in a living arena, along with large numbers of zombies. The fun mostly boils down to wielding a variety of weapons against these foes. This being the third game in the series, and it being a major platform exclusive for Xbox One, the emphasis is on more and bigger; more zombies to kill on-screen in a bigger environment.

A basic desire to deliver variety is one motive for Capcom Vancouver, to pepper the game with little treats that celebrate the series. Players can stumble upon a locked museum dedicated to the events depicted in the previous games. The exhibits are interactive. A funeral scene turns out to be in memory of of a well-liked character from a previous game. And, of course, they are all opportunities to deliver new weapons into the hands of the player.

"We're huge Capcom fans ourselves and so it's an opportunity to tip our caps to some of the games that we love and we're also inspired by the Easter Eggs used in the previous Dead Rising games," said Jones.

Which brings us back to Mega Man X, a space-marine platform hero from a more gentle age, transplanted into an urban carve-'em-up.

There is a certain symmetry at play here. Dead Rising was an Xbox 360 exclusive and featured Mega Man. Mega Man X transitioned the character from the NES to the SNES era. Now he is back as part of a transition to Xbox One. In both cases, the celebration comes around 20 years after the original. Few things happen in the video gaming world, without at least half an eye on the bountiful value of nostalgia.

"The blue bomber is a big part of gaming history," said Jones. "It's something gamers remember." 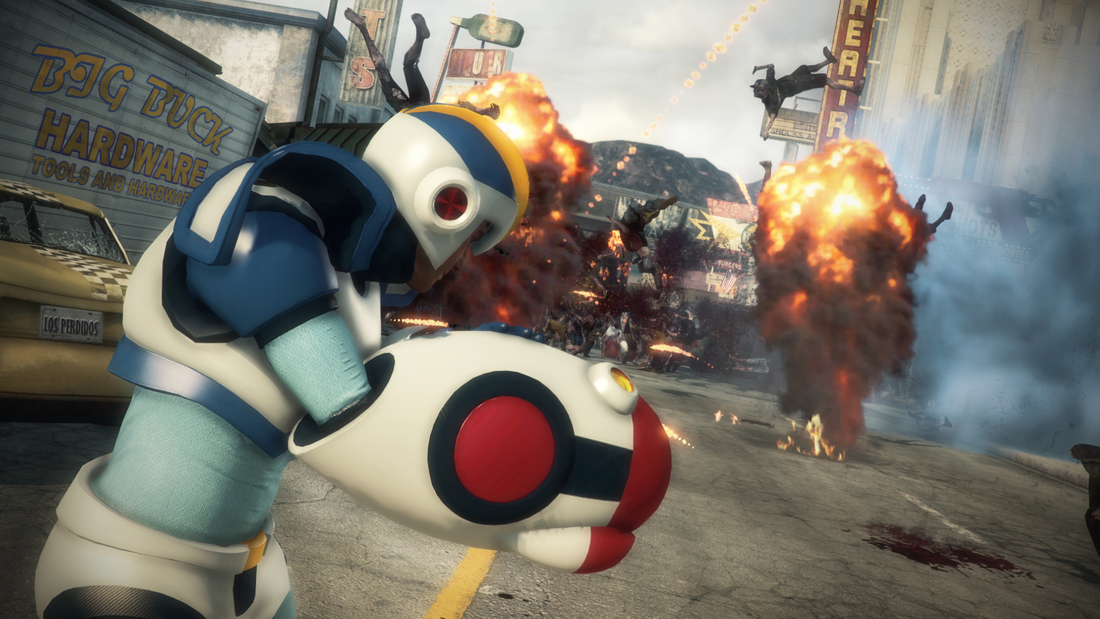 This desire at Capcom to connect the new with the old, is not without its problems. There is no handily accessible vault at the company's HQ, into which producers can plunge and plunder. Intellectual Property is a tricky business, even when you think you own all this stuff.

"International copyright law is extremely complicated," explained Jones. "I actually found out in the process of doing this that it's the Capcom USA office that owns the Street Fighter IP, not Capcom Japan which is something that they did way back in the '90s. Everybody is totally on board, but with all the paperwork it can sometimes be tricky to keep everything in order, especially if you hit a snag, like a character that was developed in conjunction with a third party developer or an anime company or something."

Speaking of tricky problems, there is the issue of how easy it will be for players to earn their Mega Man X suit and their X-Buster. Jones said that pretty much any player can complete the game in story-mode, but that Nightmare mode is a very different beast.

"Some of our QA testers think that Nightmare is possibly the most difficult Dead Rising yet," he said. "That is yet to be determined by the gamers at large. But we tried to make it a proper challenge. We made a deliberate choice to separate the regular story from nightmare mode, which is a challenge for Dead Rising enthusiasts, especially if you start that on level one, which you have as an option instead of your leveled up game, and that is going to be really hard."

On the plus side, those who achieve this feat will be let loose in a zombified city, armed with a laser cannon. "It definitely ups the ante," said Jones.