Shadow Fall looks like the future, but it's stuck in the past

The original Killzone was impossibly positioned as a competitor to Halo; Killzone 2 and its infamous "target render" reveal video was caught between impossible expectations and the somewhat subdued reality; Killzone 3 squeaked out to little fanfare tied to the PlayStation Move; and Killzone: Mercenary is best known as the closest-to-a-console-shooter on the PlayStation Vita.

Now, with the launch of the PS4, Killzone: Shadow Fall presents the best opportunity for a new beginning for the series. But that opportunity slips from Guerrilla's grasp once again, this time under the weight of a poor campaign without a team to root for.

Killzone: Shadow Fall takes place 30 years after the ISA forces of Vekta functionally rendered the planet of their enemies the Helghast uninhabitable. Perhaps taken aback at the sheer horror and devastation they inflicted, the Vektans have resettled part of one of their biggest cities with the Helghan survivors, where tensions simmer and eventually bubble over. 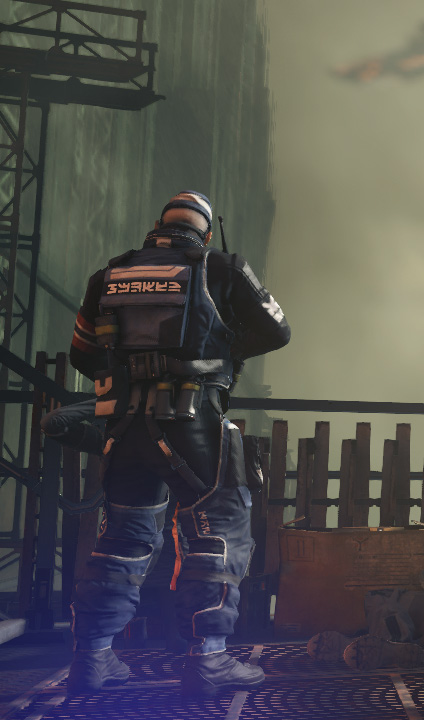 There's some grasping in Killzone: Shadow Fall's premise toward higher social commentary and exploration of real world political drama, particularly the Palestinian-Israeli conflict. There are also strong echoes of the post-WWII socialist/capitalist divide of East and West Germany during the '70s in the sorts of maneuvering and secret police actions of both the ISA and the Helghast.

Somewhere in all of this, there must have been a story worth telling, and like shafts of light in a ruined building, these bits occasionally shine through. But more often than not, they're buried in muddy shades of grey. Killzone has always flirted and later actively courted an early-20th century sort of nihilism with regards to humanity's predilections to endless, aimless war. Shadow Fall completes that cycle. Despite the beauty of Vekta and the extraordinary technical wizardry on display, the game does its absolute best to paint almost every character as an awful, irredeemable person engaging in an awful, hopeless cycle.

As the story progresses, every offense by one side is one-upped by the other, further muddying the ugly history of the entire conflict even further. Well sure, the Helghast are nightmarish neo-Fascists, but they evolved that way after being used as human chattel by the Vektans and abandoned on a merciless planet. The Helghast violently arrest and murder anyone caught on their side of the giant demilitarized zone that separates the two societies, but the Vektan's ISA forces are also coming up with ways to wipe out the entire Helghast race.

Even as the credits roll, Killzone: Shadow Fall finds another parting shot to underscore the ultimate pointlessness of the Helghast/Vektan war

This literally does not stop — even as the credits roll, Killzone: Shadow Fall finds another parting shot to underscore the ultimate pointlessness of the Helghast/Vektan war.

It didn't matter that Killzone: Shadow Fall's script was full of awful, overwrought dialogue, plot holes, or general stupidity, or that the voice acting was frequently painful. If Guerrilla was trying to tell me that everyone in the conflict depicted across the Killzone series was irredeemable, then they succeeded. But it also did an excellent job of murdering any investment I tried to place within the characters or the plot. By the end of the game, I didn't actively want any one side to win or lose. I just didn't care.

The tone and presentation are so oppressive that it's almost an afterthought that Shadow Fall's biggest problem is its deficit of fun.

The basic gunplay isn't much of a departure from previous games in the series. Aiming and shooting in Killzone has always been a more laborious process than in its first-person shooter contemporaries. Some of this is due to basic latency between the input on the controller and the game's response to that input, but there's a sense that Guerrilla has embraced this, whether it was originally intended or not. Weapons in Killzone: Shadow Fall tend to be large and loud and onerous. It's part of Killzone's sensibility.

While Killzone: Shadow Fall frequently feels like a by-the-numbers, current-generation shooter, there's no disputing its visual splendor. Shadow Fall is a beautiful game, and, unlike many cinematic shooters on the PS3 and Xbox 360, it's as much about seemingly thousands of moving parts interacting at once as it is static geometry. There's a real sense of scale and scope provided by the visuals that wouldn't otherwise be achieved. And, not to put too fine a point on it, Shadow Fall's graphical prowess made the entire affair just slightly less tedious — though it's hard to say the trip is worth the scenery.

This isn't the problem. Instead, Guerrilla can't seem to find an effective, functional combat loop. Enemies tend to cower in cover or, later, flank from every direction using shielded Helghast with shotguns or worse. Body shots aren't useless, but they're not very effective, making Shadow Fall a game of obligatory, boring headshots, often from a distance under walls of gunfire.

Attempts at stealth are undermined by enemies' improbably wide cones of vision. And, despite repeated instances where Shadow Fall's X-ray sonar ability showed me enemies running in place against walls, they still managed to find every hole and opening to shower me with bullets. Theoretically, you can crouch behind a barrier and hit the left trigger to pop up over it to take shots at Helghast in the distance — but somehow, every piece of cover in the game manages to leave your head exposed to enemy fire.

Death frequently contributes to Shadow Fall's campaign length. The game has an infuriating, trial-and-error approach to forward progress. The UI is disinterested in suggesting the next objective or mission-critical moment in a variety of circumstances. On one level, locked sections of a research vessel are accessed by picking up fuel rods from elsewhere on the ship and slotting them into place — something Killzone: Shadow Fall never told me.

Toward the end of the game, I died and reloaded somewhere in the neighborhood of two dozen times in the umpteenth holdout fight against an overwhelming Helghast force. The solution? I had to make a break for a docked bomber and use its guns on the Helghast until they retreated, which, again, the game never bothered to tell me.

Some of this is due to questionable art design, as enemies are often incredibly difficult to make out against environments — a problem that also includes basic UI elements like objective markers, which frequently blend into any given scene, regardless of setting or lighting. Playing Killzone: Shadow Fall often felt like translating a foreign language under a hail of gunfire.

The game constantly fails to find any sort of trajectory or direction, and it suffers as a result. In Guerrilla's attempts to depict the horrors of a divided society, they often crush the life out of the game with extended "playable" cutscenes showing awful though pedestrian moments in day-to-day New Helghan. But, ironically, the parts of the game where I was able to wander through and soak up the often stunning environments that make up Killzone: Shadow Fall were the moments of the campaign I enjoyed most.

Multiplayer at least manages a level of competency that escapes Shadow Fall's story component. Thanks to a pretty steady 60 frames per second and the revelatory new DualShock 4, it controls better than any previous Killzone game has — while still retaining Killzone's inherent style and identity.

But Shadow Fall's multiplayer stages feels cluttered and not as navigable as I would have liked. It seemed like I was always bumping into some invisible piece of geometry and getting killed for the trouble, or jumping against a railing that my soldier refused to vault. And, similarly to the campaign, there's not really anything new, interesting or ambitious about Shadow Fall's multiplayer — the constantly evolving objective-based play of Warzone matches has been around since Killzone 2. 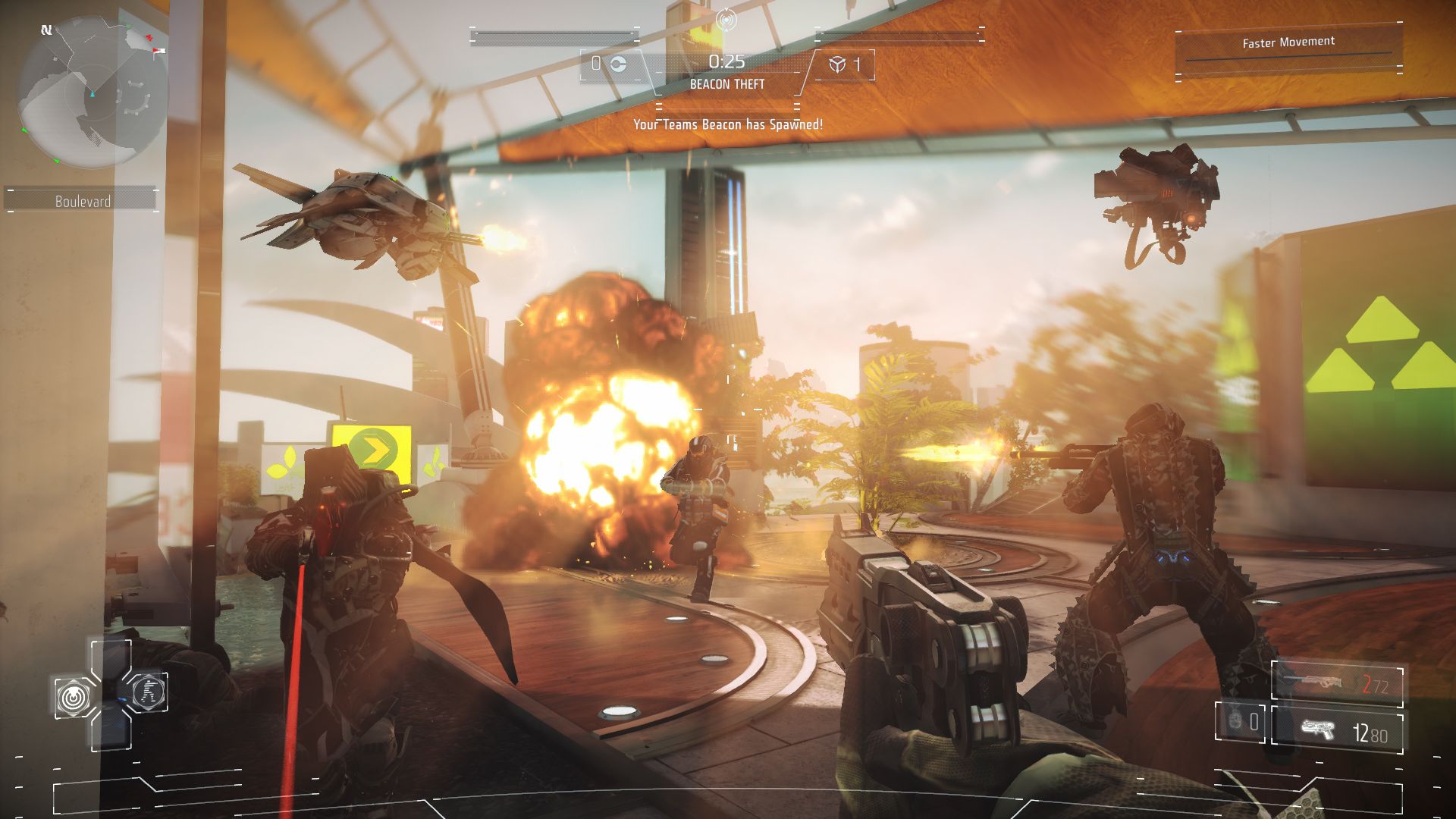 Shadow Fall looks like the future, but it's stuck in the past

That absence of meaningful evolution might be Killzone: Shadow Fall's biggest sin. For all the next-gen bluster of its visuals and the repeated blunt-force attempts to ram a message home, Guerrilla's first shot on the PS4 retreads shooter cliches, and poorly. In a launch lineup crowded with shooters, Killzone: Shadow Fall sits at the bottom.

Killzone: Shadow Fall was reviewed on a PS4 test kit provided by Sony Computer Entertainment. Multiplayer was tested at a review event held at The Standard hotel in New York City. You can find additional information about Polygon's ethics policy here.