For NBA Live 14 developer EA Tiburon, the NBA Live branding is more than just the title of the game — it represents the studio's philosophy when it comes to next-generation sports titles.

The franchise is returning next week exclusively on next-generation consoles after a four-year hiatus caused by the consecutive cancellations of NBA Elite 11 and NBA Live 13 in 2010 and 2012, respectively. And NBA Live 14's developers know that they've got a tough road ahead when it comes to competing with 2K Sports' NBA 2K14 this fall and the NBA 2K series in the years to come. So they're tackling that problem with a bit of a different approach.

Tiburon is focusing on delivering a truly connected experience in all facets of NBA Live 14. Player ratings are constantly updated through EA's exclusive partnership with Synergy Sports Technology, a provider of detailed data on all 30 NBA teams and the way their players are performing on the court. The collaboration manifests in 70 different tendencies that Synergy assesses for players, along with other information like the kinds of plays that athletes run.

That data drives the ratings in NBA Live 14 — the developers still maintain a good deal of oversight, but they use the Synergy data as a baseline. The process of assigning ratings is "more automated than [for] Madden, but not as automated as we want it to be," said Ryan Ferwerda, a producer on NBA Live 14, in an interview with Polygon this week after we played the PlayStation 4 version of the game. The developers eventually want to "eliminate subjectivity in [determining] player ratings," to base the virtual athletes' talents off their real-world performance rather than have a person at Tiburon assess and assign numbers to abstract skills.

The connected nature of NBA Live 14 also extends to the game's interface and most of its modes, as you see in the screenshots above. That's headlined by the EA Sports Hoopnet, an in-game social network that keeps you updated with a real-time feed of your friends' activity in every mode.

Tiburon will also create one-off challenges based on the events of the real-world NBA season, often within hours of those events. These are scenarios like Madden Moments, where you're tasked with recreating something special like Michael Carter-Williams' impressive NBA debut or Derrick Rose's last-second bucket to beat the Knicks. Another way to play NBA Live 14 is NBA Rewind, where you can play along with a team's progress through the season. This mode uses Synergy data to provide the exact rosters and statistics for every past matchup that you're revisiting, and if the technology or the developers detect an outlier performance, Tiburon can generate a challenge from it.

This is the studio's vision for a next-gen simulation basketball game: The consoles and their connectivity allow for a "live" experience that grows and changes along with developments in the real NBA. Tiburon hopes that will help NBA Live 14 players become engrossed in the game and more invested in the real-life sport; Ferwerda even characterized it as "more like an MMO" in terms of the pace of drip-fed content updates. He acknowledged that this is impossible to evaluate until after the game is released, but if Tiburon makes good on its promise, the game will have provided basketball fans with something the competition doesn't quite have.

From our limited hands-on time with NBA Live 14 — we played for about one quarter — it's unclear if the gameplay will hold up its end of the equation. The game's vaunted dribbling mechanics did feel easier to grasp than NBA 2K's setup, although after years of using the right stick, pressing a button to shoot will take some getting used to. And we liked the simple playcalling controls on the D-pad, with presses and double-taps used for isolation, plays, pick-and-rolls and more. We'll need more time to assess more the complex elements of simulating basketball, like spacing of teammates on the floor. 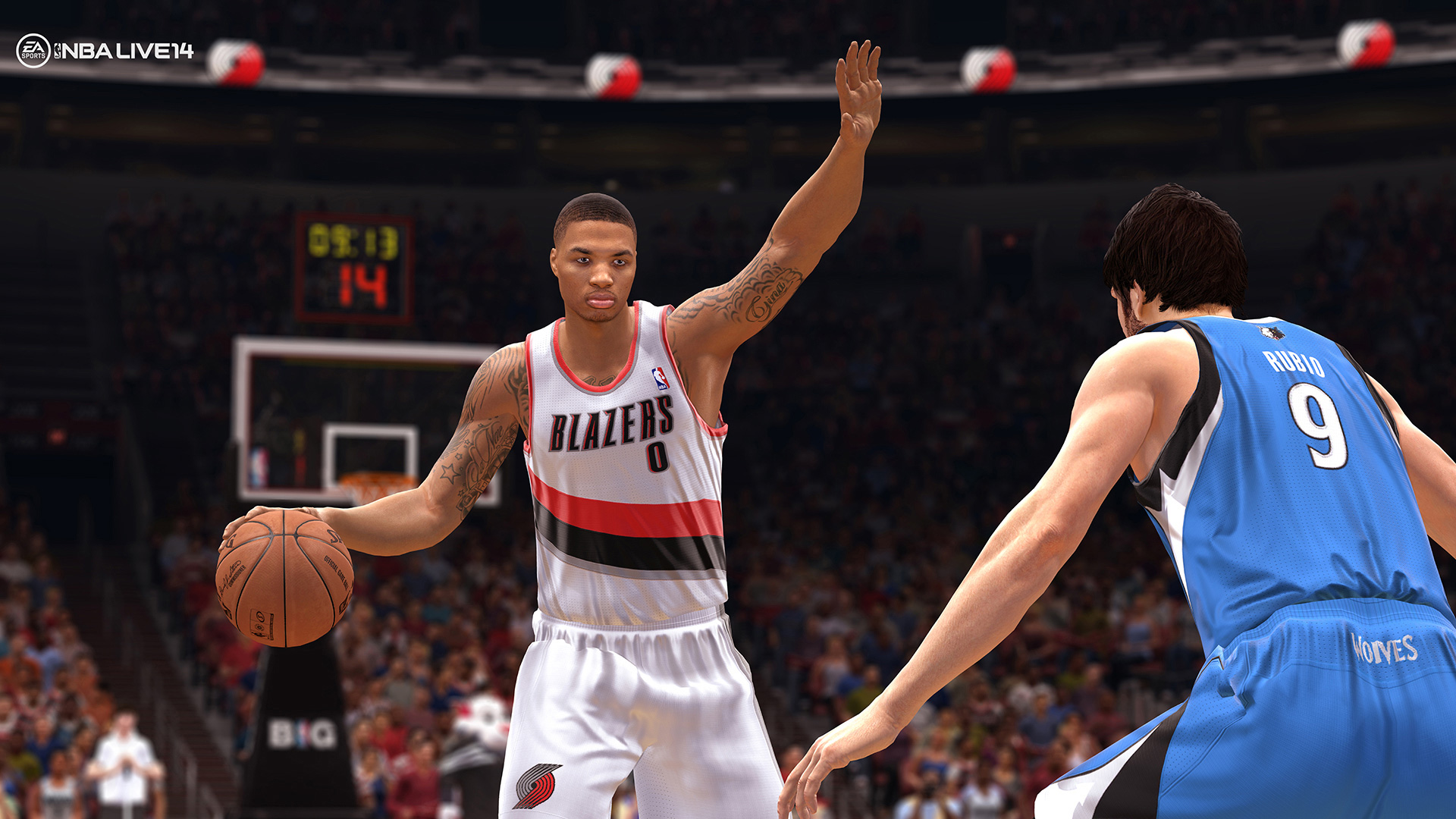 It's also hard to discuss the game objectively, since the only frame of reference in recent history is NBA 2K, and NBA Live 14 doesn't seem to stack up. The developers don't expect to topple the NBA 2K juggernaut this year, and EA's marketing for NBA Live 14 has reflected that hat-in-hand attitude.

"I think from a promotional aspect and [...] messaging, what you see from us — we really wanted to not, kind of, be full of shit. And we wanted to be humble, contrite. We came out and just said, 'Hey, we know we've screwed up the last three years; we're going to do the best we can to earn back your trust,'" said Ferwerda.

Gameplay designer Scott O'Gallagher agreed, telling us, "More of the controlled messaging has been really good for us, and good for the community. I think us saying anything other than that is really disrespectful to 2K. They've done a good job for so long [...] and just saying that we're going to do this and do that and stomp... it just doesn't make any sense."

That's encouraging to hear from the makers of a franchise whose previous, canceled incarnations were promoted with obnoxious bravado along the lines of "profoundly [evolving] the basketball experience." To be sure, EA Tiburon is confident in the game it's delivering next week, but the studio believes it's a first step — "while we're proud of what we [are releasing], we're not satisfied," said Ferwerda, "and where we're moving toward is kind of what motivates us and keeps us going."