One of 2013's critical darlings may finally find its audience in 2014.

The Ouya platform, however, failed to attract a user base in the months following release. Developer Matt Thorson says he's sold roughly 5,000 copies of TowerFall.

Thorson believes that number is about to increase dramatically.

In the first quarter of 2014, TowerFall's six-month exclusivity with Ouya will expire and the game will be made available on the PC gaming digital storefront Steam. Just this week, publisher Valve announced Steam hit 65 million users. "[Steam is] probably the best platform for releasing an indie game on," says Thorson, referring to the PC release as "a necessity." Today, Thorson announced the game will also be released on the same day for the PlayStation 4.

"[Steam is] probably the best platform for releasing an indie game"

For the game's coming-out party, Thorson has given his project a new name: TowerFall Ascension. "People need to know it's a new thing," says Thorson. "It's not just a straight-up port. There's so much new stuff."

Ascension will include new weapons, characters and maps for the multiplayer mode, along with a quest mode for one and two players. New stages, like the underwater ruins, will unlock via surprise animated sequences. Thorson wants TowerFall's world to feel "like a place where anything can happen," not just a static set of battle arenas. The PS4 version of the game, specifically, will include 50 new versus levels, four more playable archers, a new 12-player cooperative Quest mode, six more power-ups and more.

The developer's had a little more freedom with the single-player. 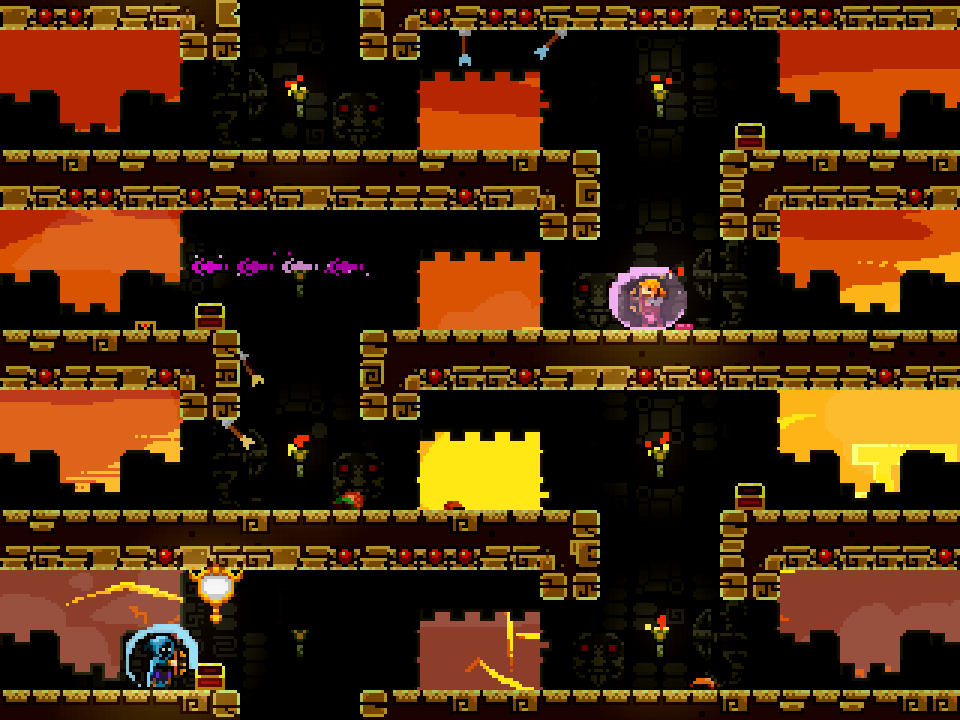 The first iteration of TowerFall — long before the Ouya release — was a Zelda-like adventure with a large overworld and boss fights. Single-player was scrapped after Thorson prototyped the multiplayer mode, which clicked with those who tested it.

Five single-player iterations and one multiplayer-only release later, Thorson believes he's created something worthwhile in the form of a proper quest. Currently incomplete, the mode is a series of levels that pit one or two players against increasingly difficult swarms of enemies. Think survival mode with a delicate thread of narrative progression.

Thorson believe the game's fun for any skill level with three to four players, and for high-level players in one on one. The quest mode will give solo players something to do, and train them to fully enjoy head-to-head.

But what about the Ouya? Thorson says anyone who's already purchased the Ouya version of TowerFall will receive the additional new content for free three months after the release of Ascension.

The first iteration of TowerFall was a Zelda-like adventure

He doesn't regret releasing early on Ouya. The company paid an advance that allowed to develop the original version of the game, and the sales, while modest, supplemented that initial lump payment. Plus, the release, and the positive attention it attracted, encouraged the young developer to keep building on the project. "I never would have made the quest mode," he says, if it weren't for the game's initial support.

It's never been about the short game, according to Thorson. He wanted to create a game with legs, something competitive that people will play for years. But first, he just needs people to play it. On Steam and PS4, Thorson will finally have that chance.