The Legend of Zelda: A Link Between Worlds is one hell of a risk.

More than two decades after The Legend of Zelda: A Link to the Past was widely regarded as one of the greatest games of all time, Nintendo is doing the unthinkable with a direct sequel. There are no nebulous allusions to hidden timelines. There are no cute winks or nods or maybes. The Legend of Zelda: A Link Between Worlds takes on all the expectations and danger of direct acknowledgement of its predecessor.

But A Link Between Worlds takes the fundamentals of the series' 16-bit era and flips its design conceits on their head. Nintendo has taken its most sacred cow and pushed it out into a more open world with all the terrifying freedom the series has never had.

The result? The best Zelda game of the last twenty years.

A Link Between Worlds is set in the same Hyrule as A Link to the Past. Sure, it's a few generations later, but for fans of the series — which, let's be clear, should be you — everything will be right where you left it. It follows the adventures of a new Link, a new hero of Hyrule. Pulled into a strange conspiracy involving a villain who turns his victims into paintings and spirits them away to a dark shadow world called Lorule, Link is saved by a mysterious magic bracelet. This grants Link a special gift: the ability to transform into a painting himself and move along walls in 2D.

But here's the thing: before going two-dimensional, A Link Between Worlds re-establishes the series' former tropes and mechanics as quickly as possible. There are no five-hour tutorial phases, no hand-holding. You go from waking up in your bed to swinging a sword in all of five minutes. This new Zelda doesn't waste any time getting you to play it. And it plays incredibly well. 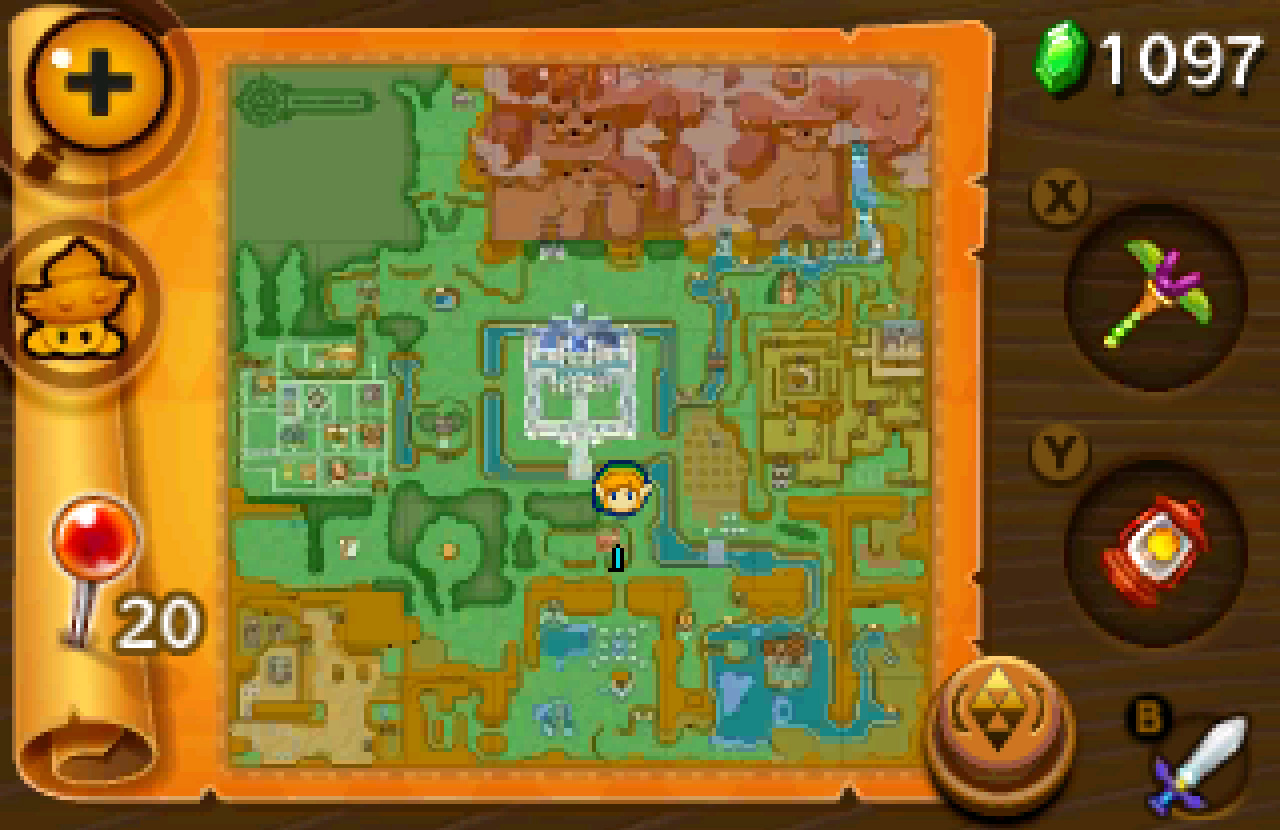 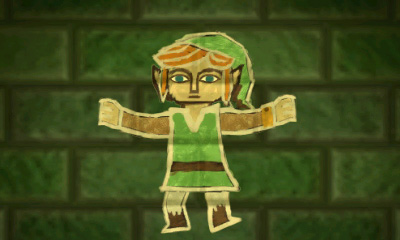 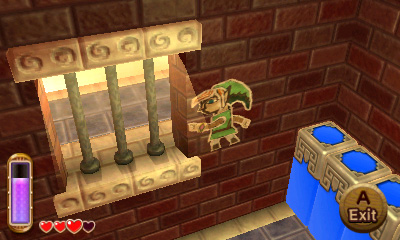 Link is as responsive as he ever was in the 16-bit era, whether swinging a sword, throwing a boomerang or slinging a bow. Nintendo has done a commendable job in bringing the pixel-based game design of overhead exploration and dungeon-crawling hack-and-slash into literal 3D here. I never once lamented the polygonal Link. The game feels exactly like it should as a sequel to A Link to the Past. In fact, it feels like someone went back in time to give the designers of Link to the Past a 3DS to make a direct sequel.

But Nintendo uses the refined foundation of the pixel-based Zelda games as a start for something much more ambitious. A Link Between Worlds breaks up the basic structure of past Zelda games by giving you access to every piece of equipment from past Zelda games almost immediately, imbuing the game with open world sensibilities — there's even fast travel.

Items are no longer buried treasure to be found. A Link Between Worlds quickly establishes an economy with the concept of item rental. If you've got the rupees, you can rent equipment items like bombs or the grappling hook indefinitely from a mysterious merchant who takes residence in Link's house. They're all yours for the taking — until you die, that is, when you forfeit the lot of them.

This adds a new sort of tension to the game: If you die, it's going to cost you, practically speaking. It adds consequence to the game, rather than the trite return to the beginning of the dungeon. It also radically changes the way you progress through A Link Between Worlds in comparison to previous Zelda titles. There are still a few areas whose access is restricted to a few pieces of equipment that you can't rent. But otherwise, Hyrule and Lorule are totally open within about 45 minutes of play, and you can tackle dungeons in almost any order.

The single-item focus of previous Zelda dungeons — where each area would contain an item required to fully explore it, and to access the next area — is gone. Instead, dungeons are often designed around several pieces of Link's equipment at any time. A Link Between Worlds also adds a new emphasis on multi-level dungeons that require constant back and forth from one floor to the other via pits and other avenues.

The end result is a collection of dungeons that require more creative thinking on a regular basis than previous Zelda games. There aren't necessarily multiple ways to solve each puzzle, but I almost always felt clever. This is partly because so much of the game was familiar to me as a life-time fan of A Link to the Past — it made sharp departures throughout stand out that much more. This nostalgia helped and confused me throughout A Link Between Worlds. Hyrule is almost completely the same — you'll still find a friendly face with a bottle under a certain bridge — but Lorule forces you to relearn your way around.

The 2D painting mechanic will also make you consider your understanding of the game's vertical layers. I loved the way A Link Between Worlds forced me to think outside of the confines of the top-down perspective it's rooted in. But it always kept a strong grasp of the fundamentals of good Zelda design. Every boss has its own quirk and tricks to beat — many of them require strategies both familiar to Link to the Past players along with key twists — and dungeons often ask for multiple tools used in tandem or in quick succession.

This is really the only particular weakness of A Link Between Worlds. You might go most of the game before using a particular tool, which was more than enough time for me to forget the signals the game used to suggest what I needed to be doing. And while it's minimized considerably, the occasional bit of random, well, let's call it "Zelda-logic" resurfaces. This made certain spots completely impenetrable until I walked away for an hour or two and came back. This includes one puzzle that may be the cheapest trick a Zelda game has ever pulled on its players. In violating the rules it established in a world where well-established mechanics are God, it felt like a betrayal. 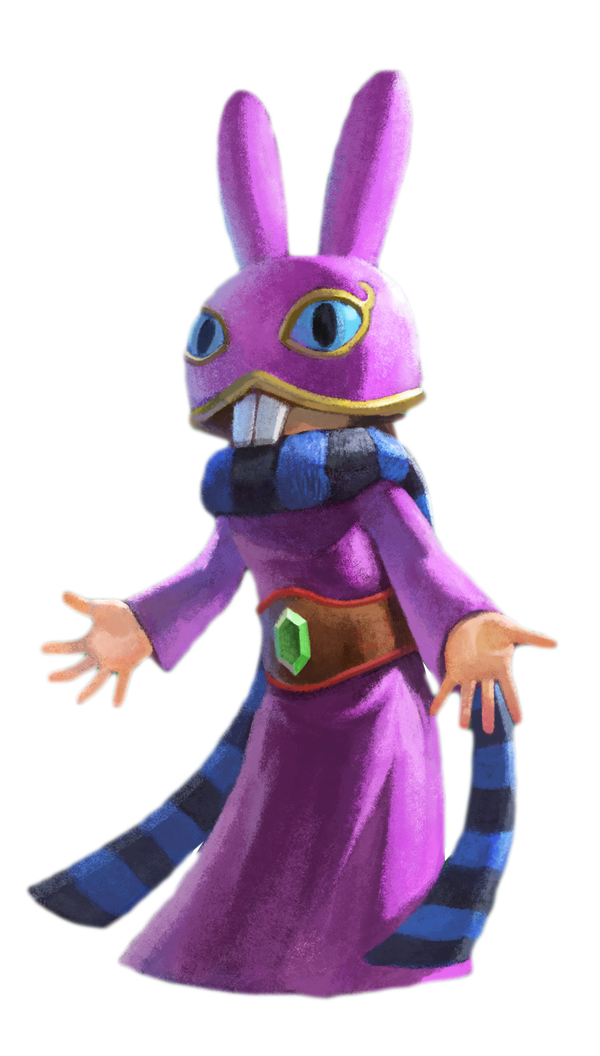 But these moments pale in comparison to the elegant combination of simple mechanics and incredible design sophistication that Nintendo layers on top of them. A Link Between Worlds is at once accessible and incredibly deep. It displays a stunning fearlessness. Tweaking and completely redefining the basic concepts of the series might have been risk enough. But Nintendo has been shockingly cavalier with one of the most beloved games ever. The result is the sequel I never knew I wanted â and one of my favorite games of 2013.

The Legend of Zelda: A Link Between Worlds was reviewed using a retail cartridge provided by Nintendo of America. You can find additional information about Polygon's ethics policy here.