Trade-ins boom as next-gen shoppers move on up

Share All sharing options for: Trade-ins boom as next-gen shoppers move on up

They come bearing boxes and bags, stuffed with old games, peripherals and once-treasured PlayStation 3s and Xbox 360s. Video game trade-in customers are entering retail outlets with bundles of collected artifacts under their arms, and they are exiting with a receipt.

The Sunday before the PlayStation 4 launch, GameStop took four times more trades in used games and consoles than average. The company told Polygon that it expects the next few weeks to be its busiest time ever in processing gamers trades, as consumers clear out the old and make way for the new.

The arrival of PlayStation 4 and Xbox One is an opportunity for customers and for retailers to make some extra money. Gamers seeking to find the $400 or $500 needed for a new console, and more for new games and peripherals, are trading in their old hardware and their game collections. Trading with GameStop may not be the most lucrative exercise, with prices paid out well below the retailer's final mark-ups, but it is convenient.

"On Sunday, we had people bringing in hardware and whole libraries," said senior vice president of merchandising Bob Puzon. "We had some reports of stores staying open late just to get those trades done."

He said that many gamers are cashing in their collections in order to make full payments on next-gen consoles ordered earlier in the year.

Puzon said that 43 percent of people who have pre-ordered are paid in full, and of those, 20 percent have used trade-credits to pay some or all of the price.

"Most of the people trading in [on Sunday] were already pre-ordered and they were paying off their order," he said. "We have a much larger base of people who are fully paid off than when the last generation launched. Last time we were taking $50 for a reservation and this time we are taking $100.

"When the kids finish a game they bring it back in and instead of asking for cash or credit they are applying it to their console order. Our number has grown substantially week over week. I think we will see a lot of people coming into stores and being fully paid off." 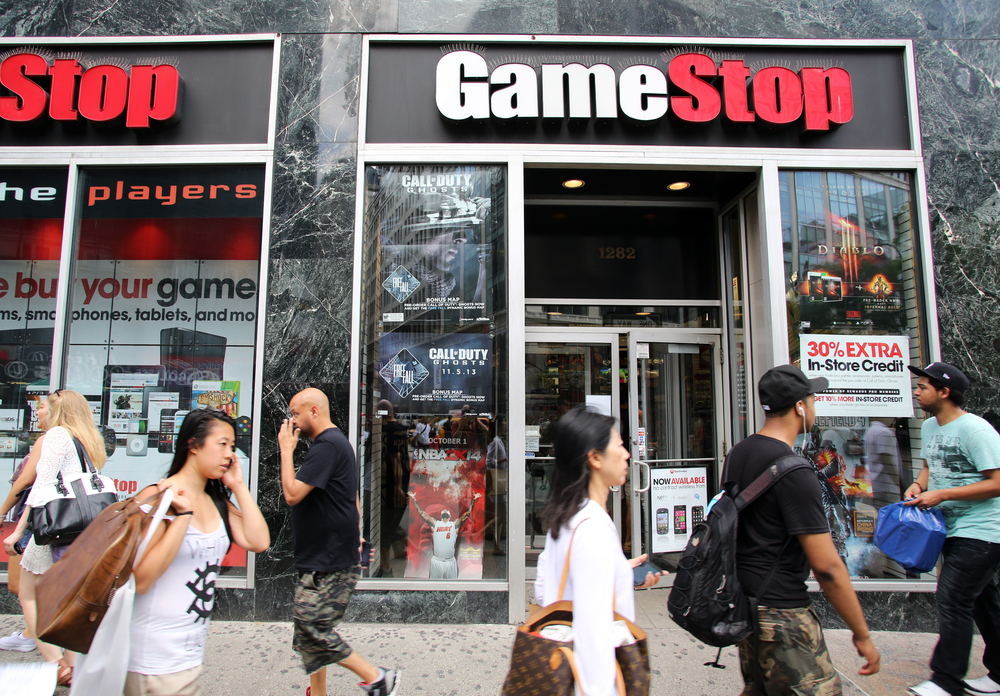 For GameStop, any boost to its trade-in program is good news. The company makes significantly more money from used games than from new. Last year, it generated $1.2 billion in trade currency. Customers who trade goods tend to re-spend the money they make in-store, and then some.

"For every dollar that is traded in, a dollar and seventy is being spent in store on either hardware or software or accessories," said Puzon.

He said that trade-ins, and a high number of games at launch, are contributing to a projected attach-rate (the number of games being bought with the console) of four. "Our market model forecasts 20 to 30 percent growth for console hardware, software and digital in 2014 in North America," clarified a spokesperson. "Built in that forecast is an attach rate of four, meaning four pieces of software for each console unit sold."

GameStop wants to sell more games and peripherals next to consoles, not merely because of the profits they generate, but because the hardware manufacturers monitor these statistics carefully, and allocate scarce hardware units accordingly. Console shortages are likely throughout the Holiday period, and retailers are competing with one another to secure shipments.

"There is an initial number that we are all given and then it depends on how we perform," said Puzon. "They look at attach rates and how we market it." He said that managers are also aware that Microsoft and Sony send out secret shoppers to see which retailers are best at selling the systems.

"I know they have some senior folks going out to test the water to see who is selling them well," he said. "I think we have got a fair share [of allocations] based on our people, who are overwhelmingly gamers, who have had hands-on experience of the consoles and who are able to walk customers through the experience."

Puzon said that, although there will be shortages, the hardware manufacturers are more organized than in years past. "With allocation, both organizations kept us in the loop in terms of what they are producing and what their yields are," he said. "Obviously when it's an import item and it's going onto the water there is always a risk. Some very challenging things happened last time when there were shortages and things were not produced on time. This time, they were very much up front and said, let's work on this first number and as they roll in let's give you some more."

He added that the company is expecting regular shipments through the Holidays and beyond, when sales switch from Christmas purchases and when "tax return and gift card" trade kicks in.

"We are hoping to pull people back in with trades, if they didn't have cash. We'll see more product coming in off the ships and hopefully during the Holiday period our walk-in business will be able to find units for sale."

Back when Microsoft and Sony began talking to retailers about the next-gen systems, they made use of their loyalty clubs to ask consumers what they wanted to see in the new consoles, and they specifically asked about price.

"The number one concern is affordability," said Puzon. "So we really put some horsepower behind marketing our trade options. A lot of money is being re-applied to the new games consoles."