Dead Rising 3 is an impressive technical achievement for the brand-new Xbox One.

A sprawling, open-world action-horror game, it soars when it allows players the freedom to explore and wreak havoc in its zombie-infested city. But Dead Rising 3 also suffers from clumsy mechanical execution and stale writing better left to the last generation.

You play as Nick Ramos, an athletic everyman doing his best to survive in Dead Rising's post-zombie-apocalyptic world. Nick runs with a small group in Los Perdidos, a fictional Southern California city, which at the outset has been condemned to a bombing, thanks to a particularly nasty outbreak. Nick and company have six days to escape, which makes for an effective narrative device and kept things tense throughout.

In the open-world tradition, there are main story missions that keep the narrative moving (and ensure that you’re on track to leave Los Perdidos before the bombing) and a host of side missions and other distractions. Side missions come in all shapes and sizes — most involve helping out other survivors, either by clearing the zombies around them or engaging in glorified fetch quests for them. The best come in the form of PP (performance points — Dead Rising’s version of XP) trials — which challenge you to kill the most zombies via specified means for medals and giant PP rewards. Since Nick needs these points to level up and improve his various skills, it's always a good idea to seek them out.

Dead Rising 3 soars when it allows players the freedom to explore and wreak havoc. 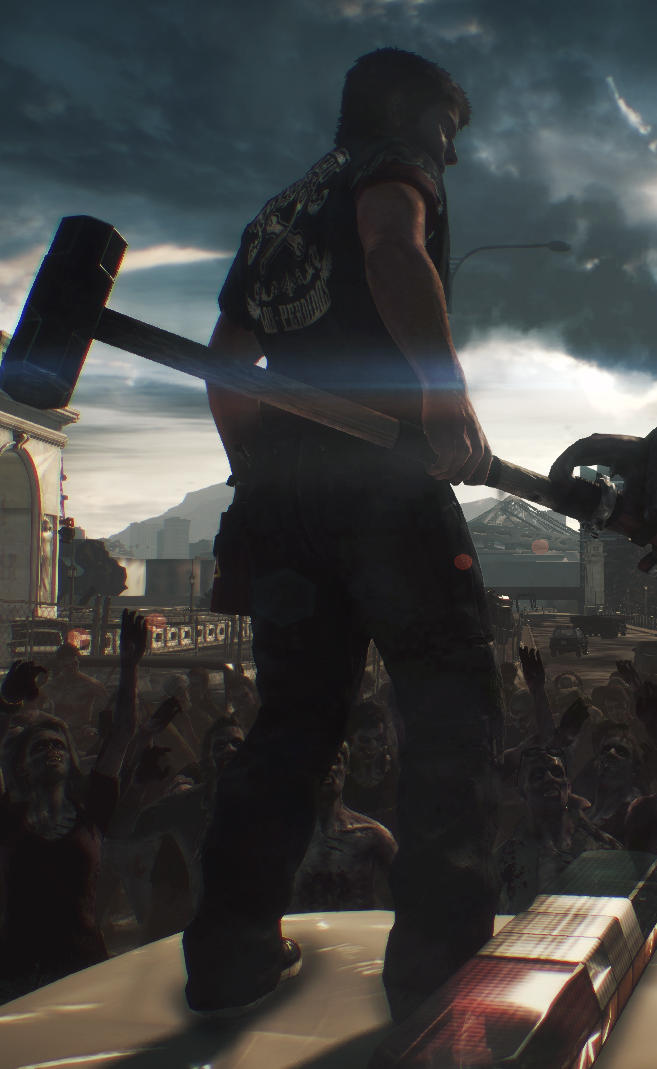 Los Perdidos is positively swarming with infected, and in order to both level up and get from point A to point B with your skin intact, you need to kill them. Thankfully, you have plenty of methods at your disposal. As in previous games in the series, just about every object that isn't nailed to the walls is fair game to use as a weapon — from the standard crowbars, handguns and baseball bats to wackier arms like firecrackers and unhinged gum ball machines. You're also encouraged to jerry-rig wacky new weapons out of the available materials — my favorite was the "freedom bear" — a sort of mobile turret born out of the union of a giant teddy bear and an LMG.

Nick can also craft vehicles with which to traverse the world and maim the most undead. This is the best way to travel in Dead Rising 3 — I always enjoyed my time in custom rides and felt rewarded for making the effort. All of your crafted goods — weapons, rides and even recipes — yield better results than the standard stuff, so it behooves you to get creative with all the junk lying about. 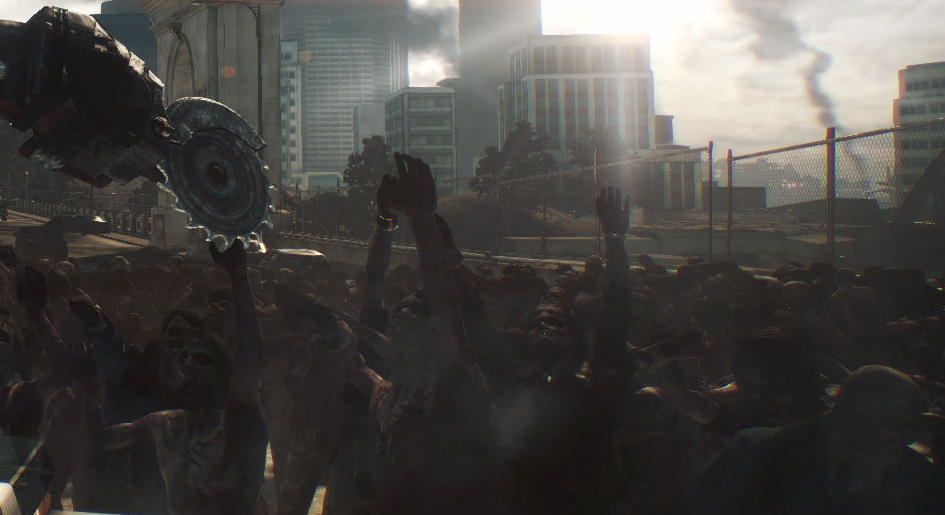 In between (and often, during) story missions, I was free to run around and maul zombies, pursue side missions and hunt for hidden collectibles. This freedom was my favorite part of Dead Rising 3. The most memorable moments in the game occurred when I ran off the beaten path to find hidden Frank West statues, fight optional boss battles, or simply see how many zombies I could run over in a stolen car. The scale of the world is impressive, and the sheer number of enemies moving onscreen at any given time is enough to give zombie-survival fantasists dreams for years to come. 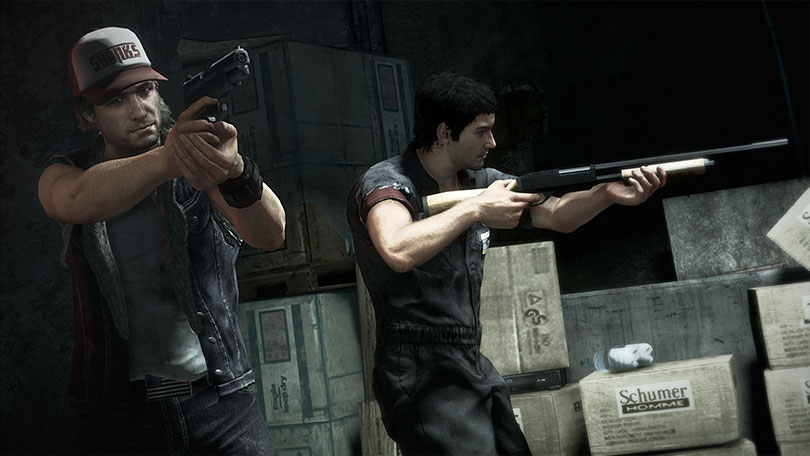 Dead Rising 3's core technology is astounding — hundreds of enemy characters are onscreen at once, itching to eat your face. And the game performs well in most situations, save for the odd texture glitch. But load times were often ponderous. I didn't mind this in between chapters, but a long load after every death made frustrating boss battles even more painful.

Both melee combat and gunplay are simplistic, but typically effective, at least around weaker foes like run-of-the-mill zombies. With melee attacks, you start out with heavy and light moves, and upgrade Nick's abilities as you go along. But Nick often felt sluggish to control — he has a weak jump and a propensity for picking up items that are lying next to the ones I actually wanted. This isn't a problem until you start to encounter more difficult — and more maneuverable — boss enemies, where the game breaks down into an exercise in frustration.

One mid-game boss encounter took me more than 30 tries to survive thanks to the mechanical jankiness. This is made even more annoying by the clumsy inventory management, which has Nick exchanging whatever item or weapon he has in his hand for a new pick-up. In the heat of battle, I would often inadvertently lose my gun because I tried to pick up a health item. This is further compounded by the slow, imprecise affair that is picking up items — so I would lose my gun for the weak office chair instead of, say, the life-saving bagel on the desk.

Playing Dead Rising 3 can be a schizophrenic experience — I was angry at the game whenever it required precision from me — precision that the controls just wouldn’t support. But I was thoroughly enjoying myself whenever it let me run amok and get creative with weapons and vehicles. It’s a game with great ideas and intermittently poor execution.

My experiences with online co-op were smooth — you and a friend (or complete stranger) can tackle Los Perdidos together, and your characters will progress in their respective instances no matter who hosts. One of the best-designed elements of co-op matching is the ability to indicate your preferred playstyle. You can choose to match yourself with other casual or hardcore players, opt for completionist, or choose "speed run" if you'd like a buddy who just wants to get through the story ASAP with you. This worked well for me — I had a lot of fun hanging out with casual players just destroying as much property — and as many zombies — as we could. 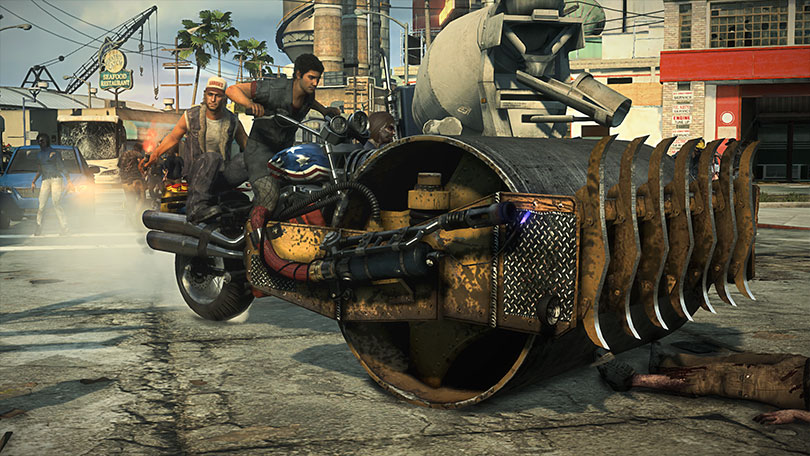 The writing in Dead Rising 3 could have done with some rethinking as well, as several characters in the game represent tired, clumsy stereotypes. I fought a "psycho" named Jerii in a sequence that was basically one giant transphobic joke. I faced off against a gay stereotype so flagrant that he was literally wielding a giant, flaming penis gun. Another boss was an east Asian caricature that would've felt uncomfortable in an '80s action movie. And the less said about Hilde (aka the "sergeant") the better.

Yes, these characters are so far over the top they're in orbit, and meant to be satirical. But the writing is so poor and juvenile — for example, the gay psycho taunts Nick with such gems as — "ride my pole," and constantly alludes to his blue balls. It's tired, embarrassing and just plain dumb.

Not every character is written with the same carelessness. Nick is a little dense, but fundamentally a decent person. And Rhonda — the leader of Nick’s enclave — is fantastic. She's tough and no-nonsense in her survival tactics and warm towards her companions.

Dead Rising 3 gets a lot of things right. It presents a massive open world filled with possibilities and features the first truly impressive use of scale in a game based on a zombie outbreak. But the game's difficulty spikes — due to its control and inventory issues — and boring, stereotype-laden writing can be difficult to swallow. There's a very good game lurking inside of Dead Rising 3 — but it feels a little unsteady on its feet.

Dead Rising 3 was reviewed using a downloadable Xbox One copy provided by Microsoft. You can read more about Polygon's ethics policy here.

About Polygon's Reviews
7.5 xbox one