Tearaway is fresh, inviting and intricate

Tearaway is unlike any game I've ever played before, and it's easy to diagnose why that is — nobody's really ever made a game like this before.

The papercraft heart of Tearaway isn't just its core design aesthetic, nor is it just a gameplay gimmick; it's absolutely everything and everywhere. I can't think of another title that has leaned so heavily upon, and so thoroughly explored, a single idea. The user interface is made of paper. Every single particle effect. Every centimeter of the game's world is made of paper; no corners were cut, save for the ones literally cut out of paper.

When combined with clever devices that utilize the PS Vita's every function, the paper world comes to life in a very real way. It's a physical, tactile experience that creases, folds and rips around your godlike input. From sound design to art design to core gameplay mechanics, every aspect of the paper premise has been explored. Tearaway's laser-focused cohesion is nothing short of magical.

Tearaway is far from a traditional platformer; even less so than Media Molecule's most famous stab at the genre, the LittleBigPlanet series. To wit: Iota and Atoi, the game's customizable male and female protagonists, don't learn to jump for the first hour or so of the game. That would be damning for any other platformer, but Tearaway fills that hour with more than enough mechanics for you to experiment with and master. 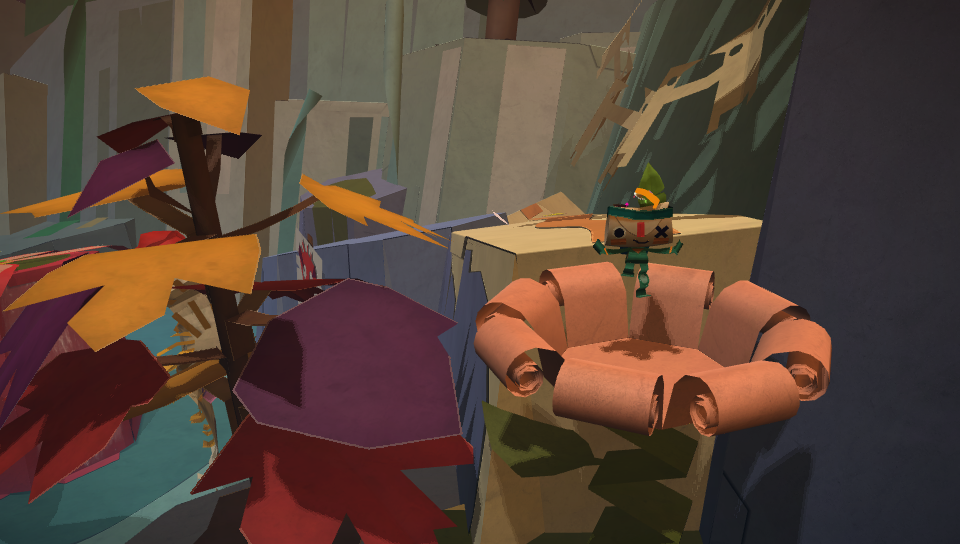 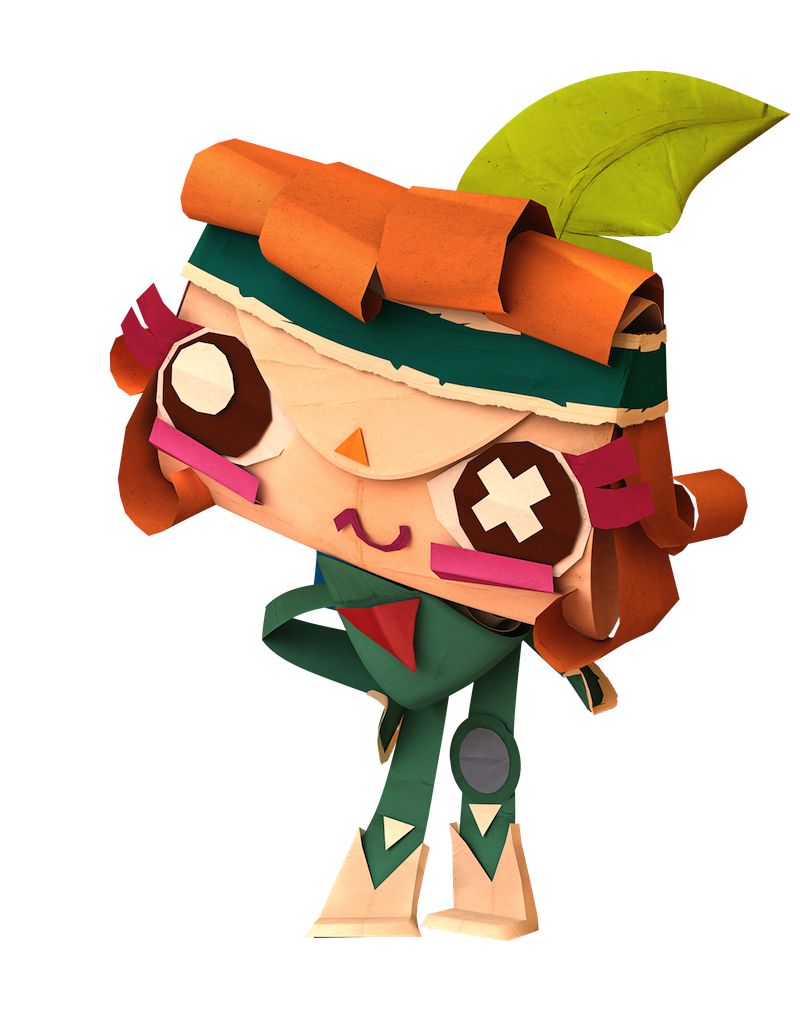 Don't be misled: Atoi and Iota eventually have more than enough classic platforming maneuvers at their disposal, and Tearaway requires you to use them in liberal measure. They're competent but unexceptional on their own — it's when they're used in conjunction with the touch-based controls that Tearaway takes flight.

As the player of Tearaway, you're just as much a character as the world's papercraft inhabitants. You're referred to as a "You," an almighty being whose face is ever-present on the surface of the sun (thanks to the PS Vita's front-facing camera). Your benevolent powers allow you to move objects in the world with a touch, unfolding helpful platforms, revealing hidden items or dispatching enemies with a poke.

You're just as much a character as the world's papercraft inhabitants.

As your paper hero explores the world, you unravel or build it around them — sometimes in conjunction with their in-game movement. It's never obtuse, and always exceedingly clever; holding a door open and scooting Iota through it made me feel as empowered as any superhero game.

Tearaway's cleverness only occasionally runs afoul of the inflexible language of platforming games. The only real issue is the camera, which the player only sometimes has control over in the game's more open environments.

In levels requiring more meticulous use of Tearaway's physical controls, you're stuck with the camera angle they've picked for you. Those angles are never inadequate for navigational purposes, but it's always disorienting to attempt to look around — say, for tucked-away collectibles — and find yourself intermittently unable to do so.

The game's set of user-generated content tools are far more limited than Media Molecule's boundless LittleBigPlanet offerings — but they're far more holistic, too. At any time, you can swap the features of Iota or Atoi, pulling off eyes and mouths and replacing them with pre-set shapes of your choosing. You can also create your own shapes using a delightfully simple interface in which you cut designs into pieces of multicolored construction paper. Your creations can be composed of a single shape, or a stack of layers to create increasingly intricate decals — and all in just a matter of minutes. 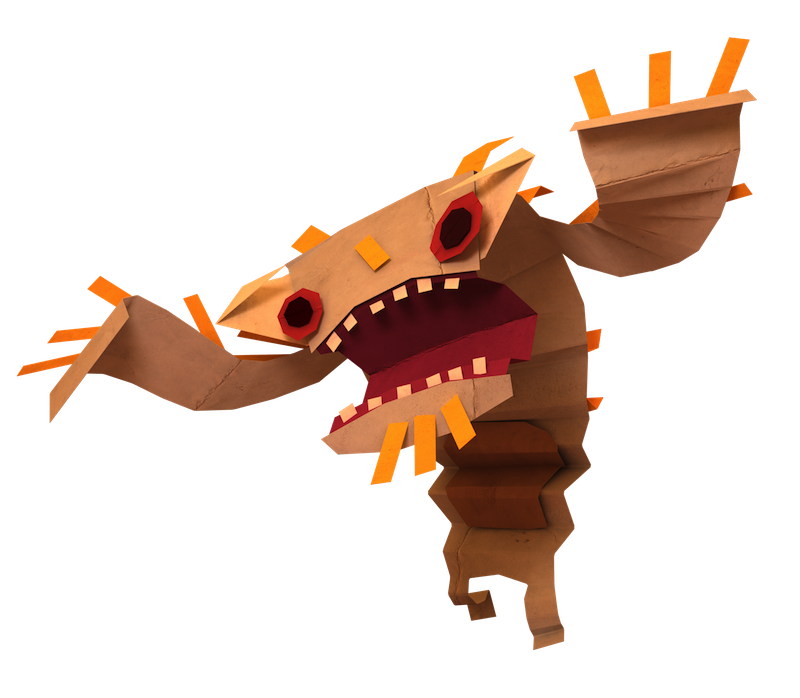 Tearaway's ending is more affecting than any I've experienced this year. 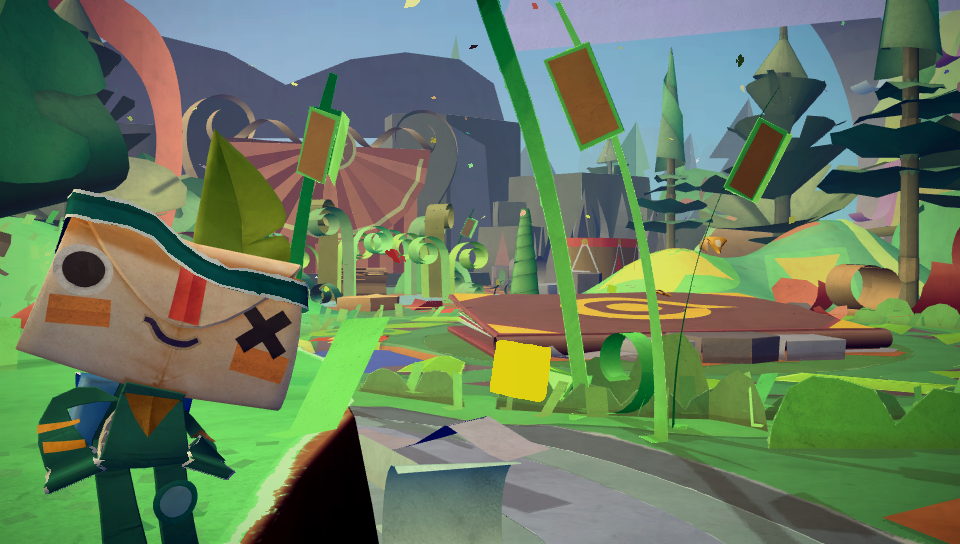 The heroes aren't the only customizable element in the world. Very frequently, a character will ask you to make something for them — a construction-paper shape, a photo they can use as a texture, a sound bite they can use as their voice. Tearaway has an extremely unique and literal approach to making itself feel like your adventure. By its conclusion, your authorship over the world and its story feels absolute, culminating in an ending that is more affecting than any I've experienced this year.

Both the game's gorgeous, colorful world and the works of art you drop into it aren't trapped within the software's boundaries. One of the game's more amusing features is an in-game camera, with which you can take snapshots (or selfies!) of the world around you using an Instagram-esque suite of unlockable lenses and filters. Those photos are often quite lovely, and thanks to some surprisingly slick social integration, you can share them freely over Twitter, Facebook or your personalized Tearaway.me profile page.

Tearaway is fresh, inviting and intricate

Tearaway is a rare breed, the kind of game that was engineered to be supremely easy to fall in love with. It's not just the inherent charm of its paper world, its infinitely catchy folk-electronic soundtrack or its cast of quirky characters. It's the way the game involves you at every turn — the way the world moves when you touch it. I never felt like I was beating Tearaway as much as collaborating with it. From cover to cover, Tearway is an engrossing, spellbinding experience.