LocoCycle appears to be the most overtly racist game of 2013.

A goofy racing/brawler hybrid starring a sentient motorcycle and her dragged-along human companion, the game aims for laughs and instead lands in deeply problematic territory.

You play as I.R.I.S., a robot-voiced sentient motorcycle with incredible combat abilities — and Pablo, a hapless mechanic that I.R.I.S. literally drags along behind her throughout the game. I.R.I.S. is obsessed with escaping her makers at the Big Arms corporation and setting off on the open road to a biker festival in small-town America. It's a pleasantly absurd premise, but presented via a series of tasteless live-action and animated cutscenes.

Gameplay-wise, LocoCycle switches manically among driving sequences where you shoot enemies and/or smash them with melee attacks, "on-rails" melee combat, quicktime events and on-rails shooting. The mix is frenetic — and some mechanics fare better than others.

Driving feels best — I.R.I.S. is quick and nimble, and dodging obstacles at high speeds was always fun in a breezy, '90s arcade game kind of way. The gunplay is shallow, but it works. On-rails melee combat is similarly superficial, but showy enough to be fun, at least in short bursts. In between stages, you can use the points you've racked up to upgrade all of I.R.I.S.' abilities, lending at least a little bit of strategy to the game. 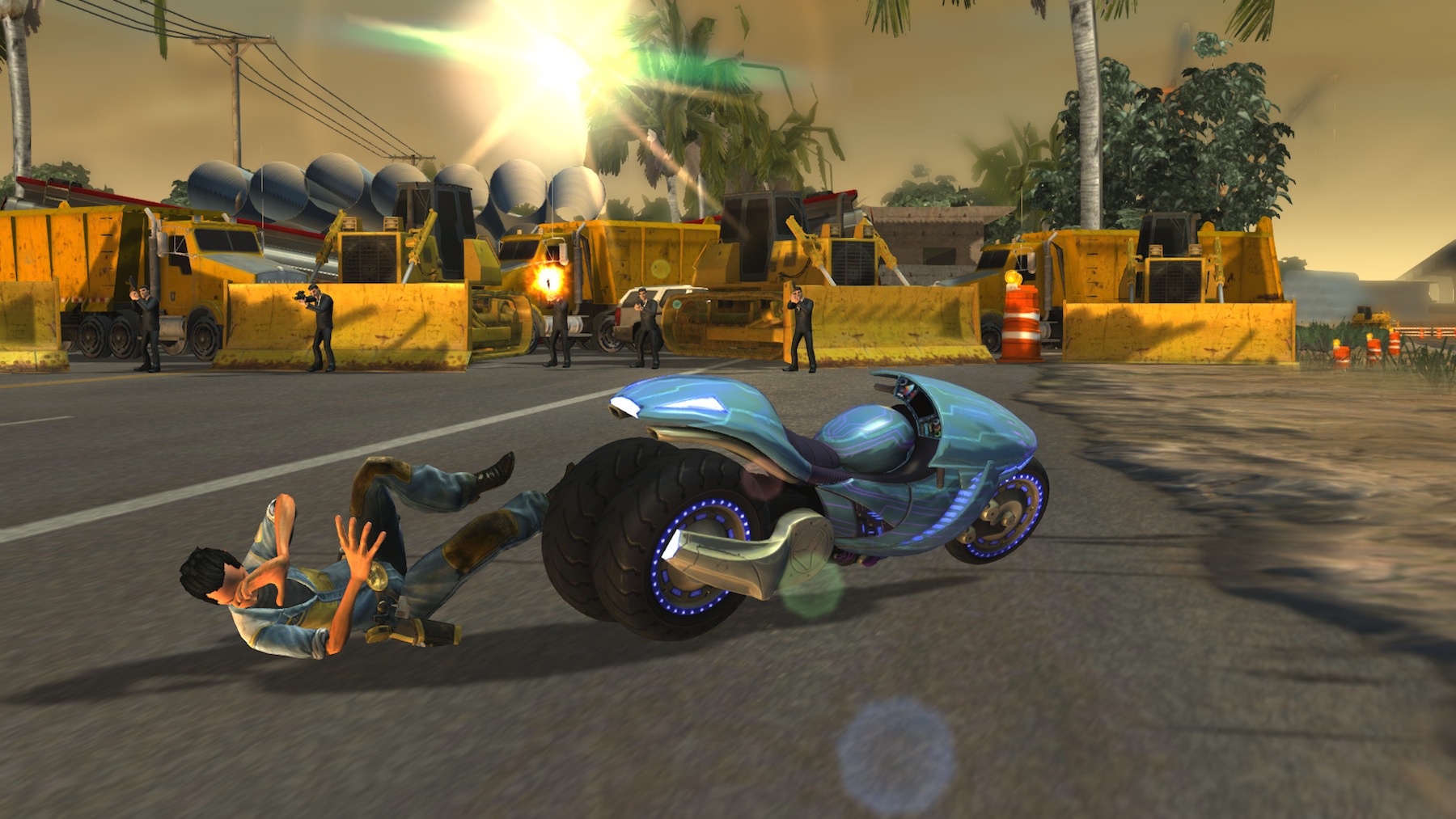 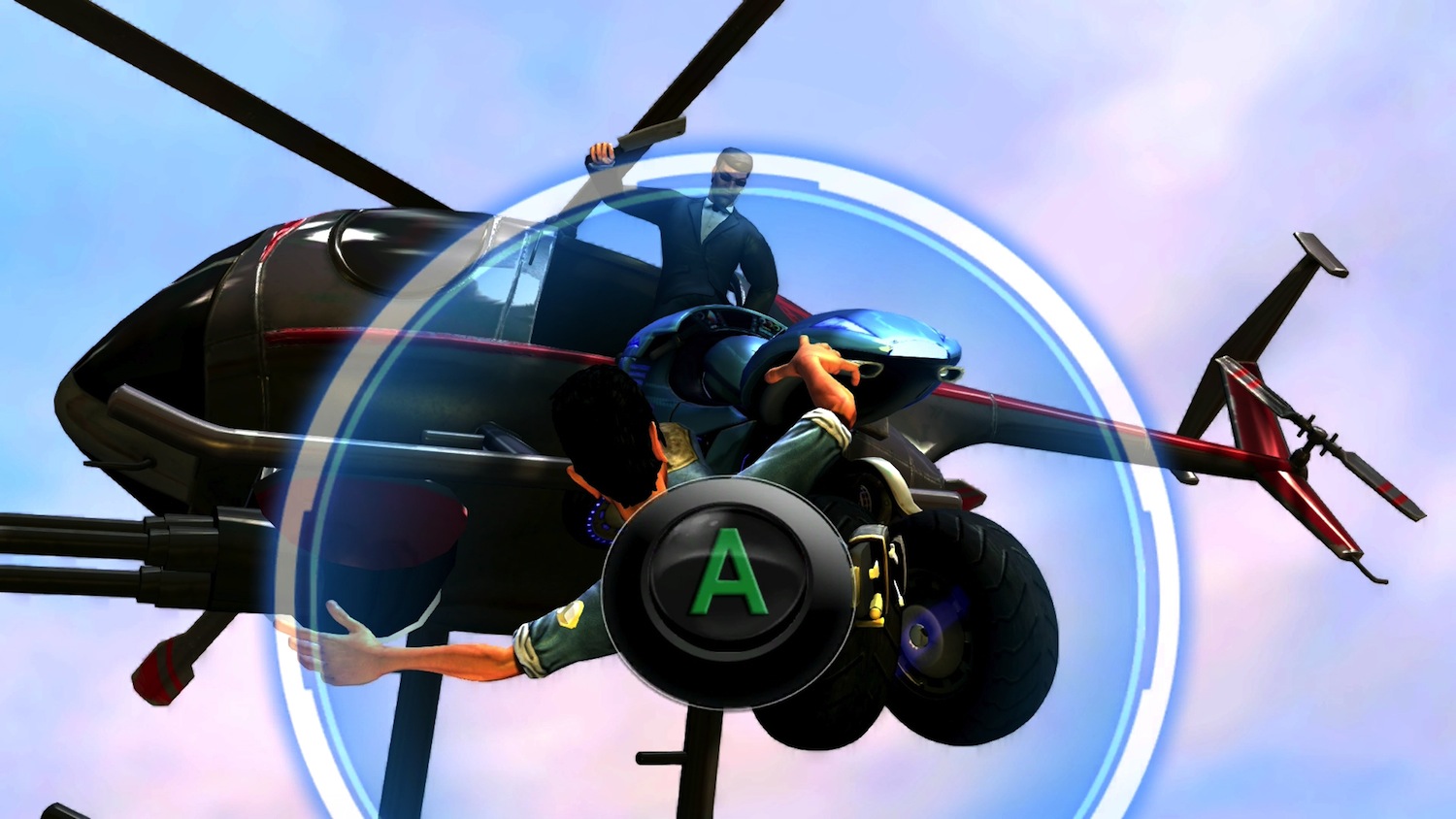 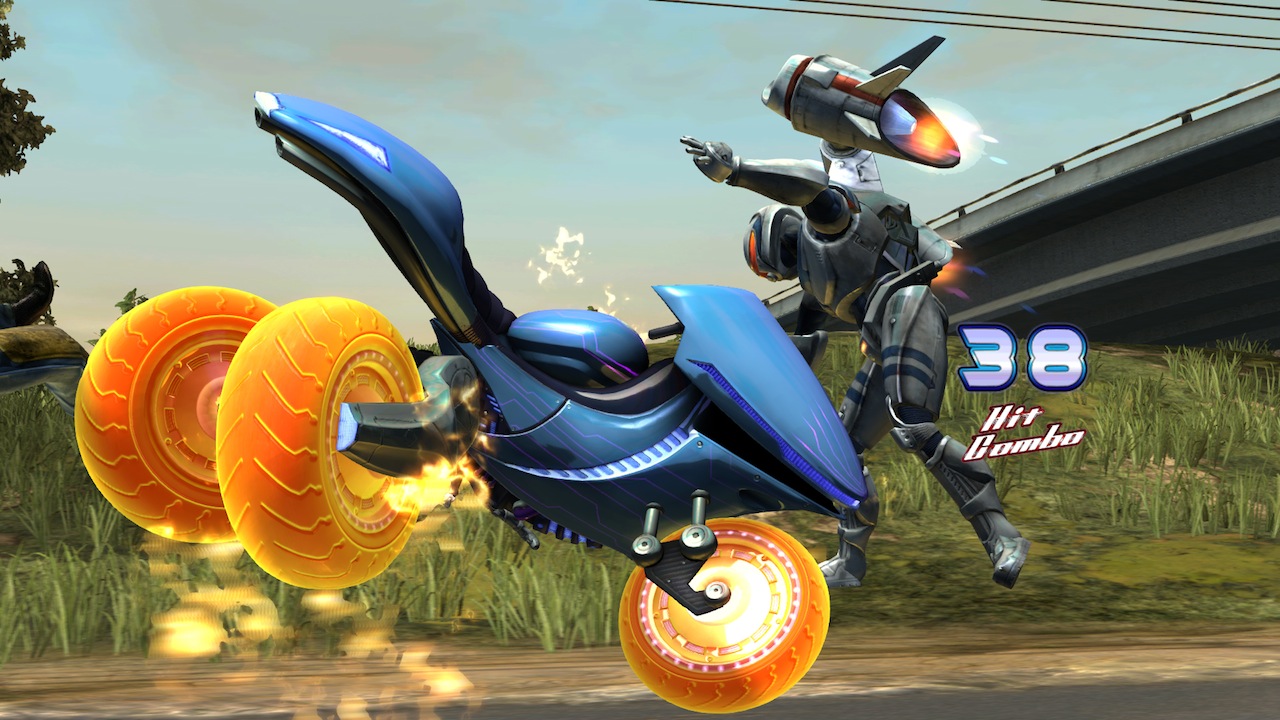 But LocoCycle's reliance on quicktime events makes a shallow game feel even less substantial, and the free-flowing melee combat that accompanies certain enemies felt laggy and imprecise. You can typically speed up, but never slow down, so foes who are just out of reach make melee fights a chore. And the on-rails shooting feels stiff and unsatisfying — another clunky mechanic thrown into the mix.

LocoCycle is trying for South Park-style "we'll make fun of every group so it's OK" satire, but it fails completely. Not only are LocoCycle's interminable cutscenes not funny, they're explicitly racist and utterly boring.

LocoCycle is trying for South Park-style satire, but it fails completely.

In the opening live-action cutscene I was greeted by offensively stereotypical caricatures of a North Korean "Supreme Leader"; an "African King" who wears a plastic crown and speaks a made-up language; and a seemingly drunk Russian military leader.

And that's just the first 15 minutes.

LocoCycle also indulges in digs against plus-sized women, little people and Latinos. Possibly the most offensive element is the fact that I.R.I.S. drags Pablo throughout LocoCycle, because she cannot understand him (he speaks Spanish). It's shocking that no one on the team thought about the implications in making LocoCycle a giant "lost in translation" joke at the expense of a Spanish-speaking Latino man being dragged by a motorcycle. 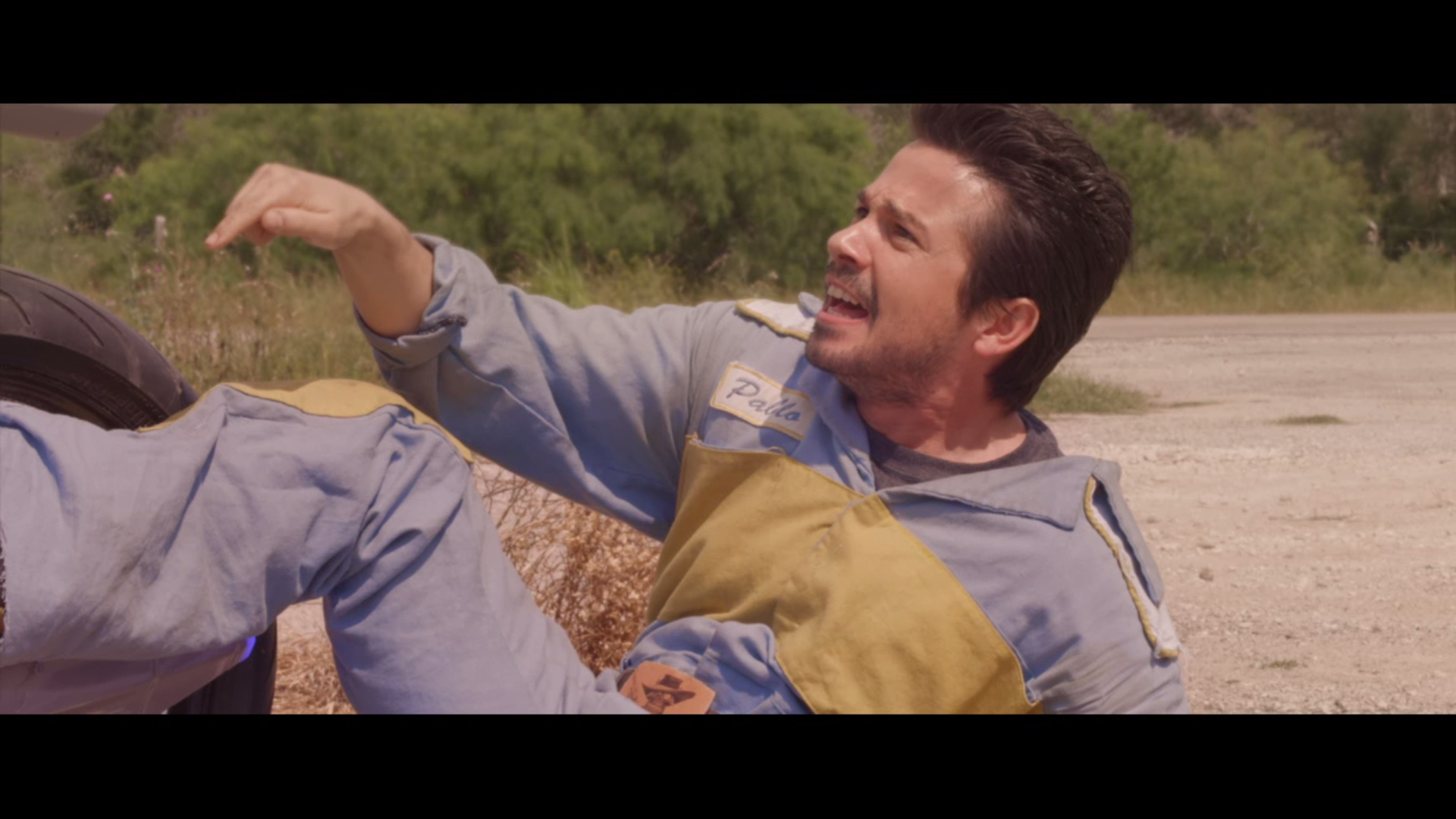 Some jokes do connect — when LocoCycle focuses on the absurd, rather than the stupidly offensive. There are a few winning sight gags: Spike the motorcycle eating ice cream, for example, made me giggle. But on the whole, LocoCycle is drowning in its own bullshit. 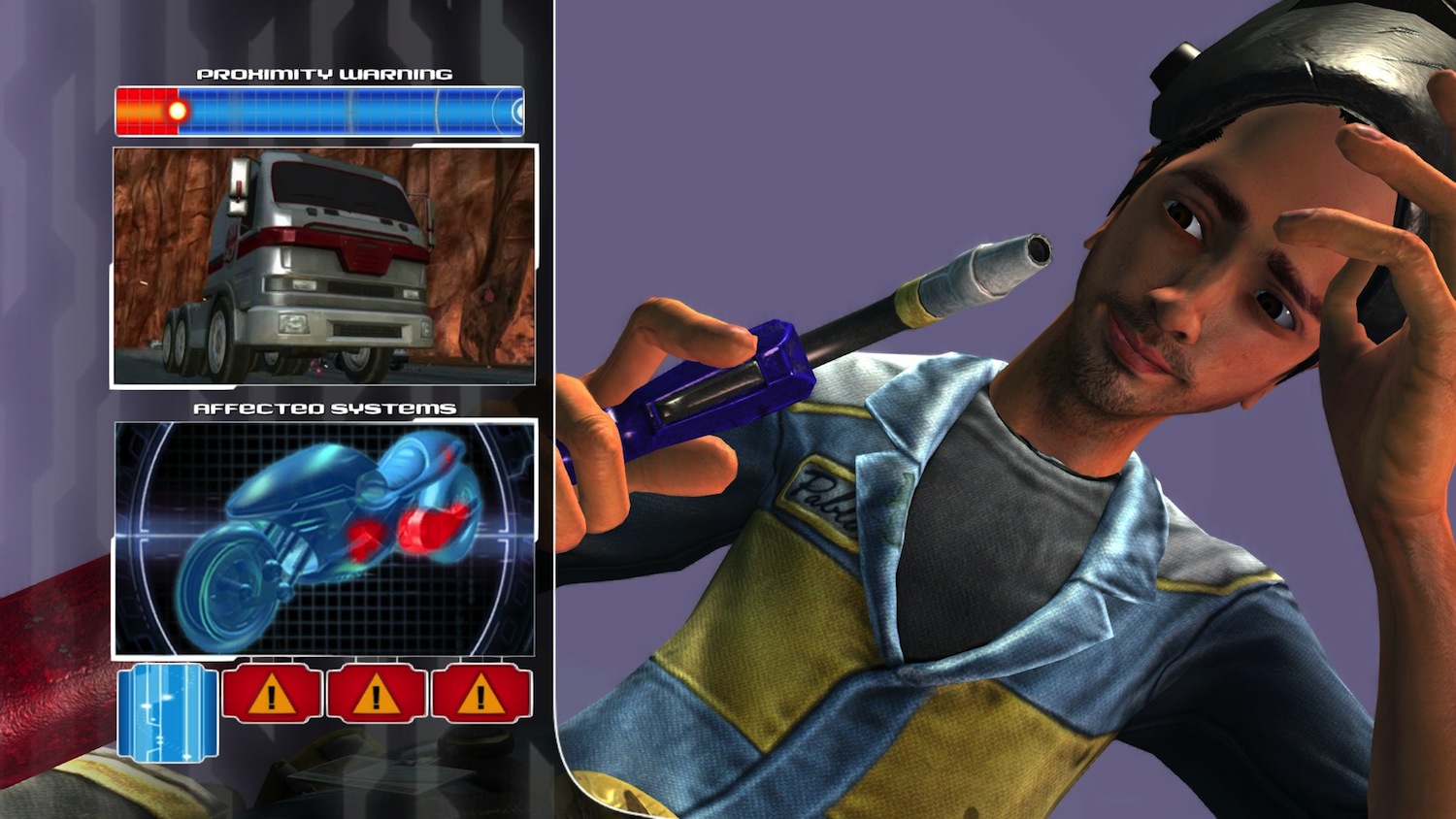 Without the dull, ill-considered cutscenes and deeply problematic content, LocoCycle would be a shallow, light distraction. With well-worn mechanics that mostly work (save for some sloppy melee and rail shooting) it's a competent genre mash-up. But the story and writing are abysmal, with cutscenes full of racist, unfunny crap. Twisted Pixel can do so much better than this.

About Polygon's Reviews
4.0 xbox one