The explosion knocks me off balance. Shrapnel and leaves fly.

A thick purple gas fills the air and I watch my enemies splutter and yelp in the smog. They try to run to safety, but it's too late. Before they get far, my teammate swoops in, a beam of golden light cuts through the air, and my gray-skinned enemies hit the floor.

I cross my leaves over my chest and jump into the air, shooting a pea from my wizard hat-clad head as a signal of triumph to my flora brethren. All's fair in Garden Warfare.

Multiplayer action shooter Plants vs. Zombies: Garden Warfare, announced at E3 2013 earlier this year, is PopCap and EA's attempt to further spread the undead-versus-mother-nature franchise that has become a popular casual games staple. Already out in three iterations on a bevy of other devices — tower-defense titles Plants vs. Zombies and Plants vs. Zombies 2: It's About Time, and free-to-play Facebook game Plants vs. Zombies Adventures — the series has proven its appeal since its debut in 2009.

But according to producer Brian Lindley, the team felt it was time to mix their popular series with another popular video game genre: the shooter. PopCap went with the Frostbite 3 Engine when building Garden Warfare, which Lindley notes means the game "has the DNA of a great shooter already built into it."

Plants vs. Zombies: Garden Warfare will launch on Feb. 18 in North America and Feb. 20 in Europe for Xbox 360 and Xbox One. The game will cost $40 on Xbox One and $30 on Xbox 360, and a Windows PC version of the game is set to launch in the future.

There are three modes available in Garden Warfare. The first is an objective-based capture mode called Gardens and Graveyards. In this mode, zombies are on the attack while plants defend their base. The second choice is a four-player online co-op mode, shown when the game debuted at E3, in which plans are on the defensive against endless waves of zombies. Team Vanquish mode is a 24-player deathmatch that awards victory to the first team to score 50 kills. 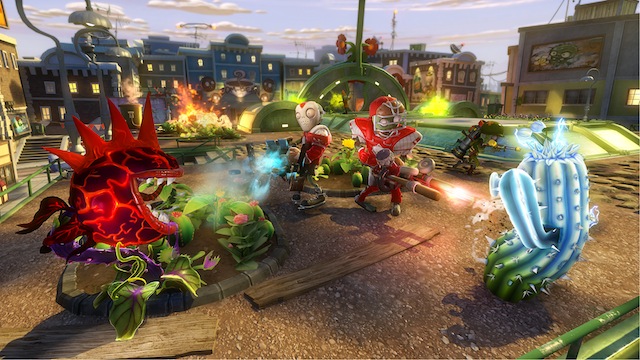 Both sides have four playable classes each. Zombies have the infantry-style running-and-gunning Foot Soldier, the healing Scientist, the drone-wielding support class Engineer and the sniper All-Star football player. Plants have a similar array of classes: the Pea Shooter, healer Sunflower, melee-based Chomper and the sniping Cactus.

The way in which PopCap has integrated the unique elements of Plants vs. Zombies into shooter-style classes is creative and quirky. For example, Scientist zombies will set down canisters that spew purple goo within a small radius. Zombies who touch the goop are healed, while plants coming into contact with the stuff will lose health. On the plants side, Sunflowers will drop marigold pots that function like med packs, shining their golden light on comrades and boosting their health.

Other characters push the limits almost into absurdity, but never in a way that detracts from the basic premise of filling shooter classes. The Engineer zombie, whose pants droop precariously down over his undead behind, will fly through levels on his pogo stick-like jackhammer. The Chomper plant — my personal favorite of the eight classes — will destroy zombies with a single chop, eating them and preventing teammates from assisting their respawn. The Chomper can also burrow underground and pop up beneath enemies for a surprise attack. The Cactus and Engineer deploy flying drones — one a garlic bulb, the other a mechanical menace — for aerial strikes.

All characters make their own unique sound — snarling Chompers, chirping Sunflowers, the high-pitched chortling of the Scientist — which raised the "aww" factor of Garden Warfare. It's still very much a shooter through and through, these characters' combat adaptations are engaging in a cutesy way. 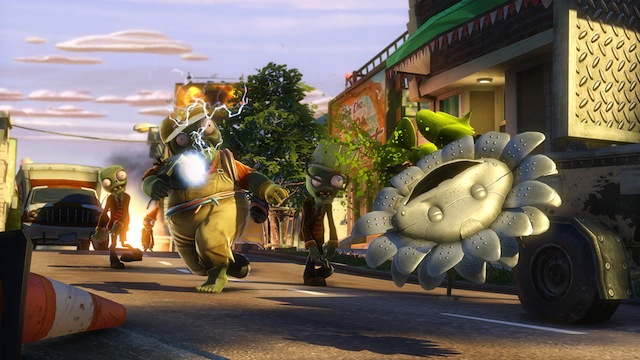 There's also some customization available for players to tinker with their soldiers' appearance. Hats, alternate costumes and weapons are available for all zombies and plants. Players can dress their Scientist as a marine biologist with a dolphin-shaped gun that shoots fish guts. Camouflage fatigues are available for Foot Soldiers and guns can be swapped out for assault and long-range battle rifles. The All-Star can swap his football jersey for a hockey uniform and shoot frozen pucks at enemies. On the plant side, ice-shooting variations are available for the Cactus, and the Sunflower can equip a new look that adds an electrical charge to its list of powers.

Each new item and costume swap adds to the zombie or plant's stats. Lindley said this is how PopCap hopes to create emergent strategies on the Garden Warfare battlefield, and hopes players will use these mixes to their advantage and build emergent tactics. Choosing and combining these variants together creates dozens of different combinations, each essentially becoming a new kind of fighter.

Each character also has its own progression path. Leveling up is dependent on the game's Challenge System; at any given time, a character will have three active challenges to complete, such as using one ability 10 times or making a certain number of one-hit kills. Once these challenges are completed, the character will level up and be given a whole new set to accomplish. Each set of Challenges is tailored to the character's playstyle, making no two progression paths alike and ensuring objectives are in line with what can be accomplished with a character's base abilities.

Leveling up will also unlock new hats, accessories and costumes, feeding back into the customization system. All progression systems are linked and run at the same pace, making Garden Warfare simple to understand and lowering its barrier of entry. 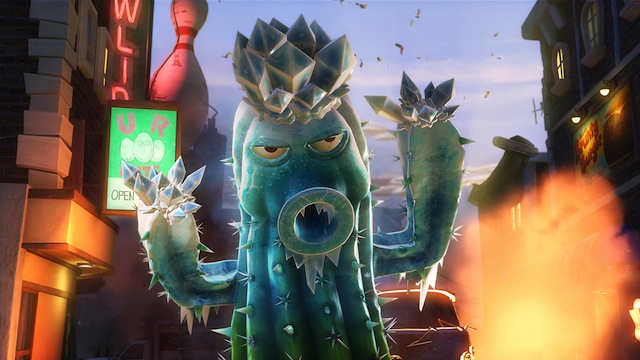 According to Lindley, PopCap looked at a wide array of previously successful shooters when putting together Garden Warfare. The challenge, he said, was taking the principles of what makes a great shooter and fitting the unconventional elements of Plants vs. Zombies into them.

"One of the things we kept asking ourselves internally was, 'What if we turned Team Fortress 2 into Plants vs. Zombies?'" he said. "That was our starting point. As we got going, we started thinking about other action games that we liked to play and our favorite abilities and intermixing them into the design as much as we could.

"There was a definite desire within PopCap to figure out what else we could do with the Plants vs. Zombies universe, in terms of broadening the different types of games," he added. "There were a bunch of other ideas that were being explored, but we took the shooter idea and really iterated in the concept and starting prototyping around. What we found was that is just immediately made sense; it was fun. Obviously we've iterated a ton on the core idea itself, but the idea of running around as plants defending and killing zombies, and vice versa on the zombie side, was just fun."

The process of adapting the plants and zombies' behavior into the traditional shooter formula of gameplay modes and job classes was a challenging task, Lindley said. While what the plants' special abilities would be were "pretty straightforward," working with the zombies was another story.

"When you look at the plant characters that we've chosen, they all map really nicely into specific archetypes — like the Pea Shooter is really good infantry-style and the Sunflower makes sense as a healer, Cactus as a sniper, and so on," he said. "The zombies, we spent a lot of time trying to figure out. When you look at zombies in the original Plants vs. Zombies, they're very one-dimensional and they each have one trick. But we had to create characters that were more diverse and fill multiple roles."

I asked if Garden Warfare is geared towards younger players due to the nature of the Plants vs. Zombies universe. Lindley said there is nothing "dumbed down" about the game, and PopCap worked hard to provide balanced and well thought-out characters that feel like they truly belong in a traditional shooter.

"At its core, we need the game to be a legitimate action-shooter," he said. "That's what we started with — we want players that want to play with skill and know there's depth to the experience. We wanted to create an experience that's obviously a little more lighthearted but that still offers that quality, balanced gameplay."

Lindley added that PopCap hopes to take an approach similar to Mass Effect 3's distribution of multiplayer add-ons when it comes to DLC for Garden Warfare. Post-launch add-ons will be available to all players for free, including more maps and modes. Lindley added that current DLC plans for the game extend to "several months post-launch."

For more on Plants vs. Zombies: Garden Warfare, check out our coverage from Gamescom.