Broken Age built around context-based interactions, not a list of verbs

Double Fine's upcoming point-and-click adventure game, Broken Age, cuts through the verb-heavy nature of adventure titles such as Maniac Mansion and Full Throttle by focusing on one concept: context-based interaction, according to founder Tim Schafer.

In the early days of adventure games, players had several verbs to choose from: pull, push, open and so forth. In some cases, it made each new challenge a game of trial and error, as players had to experiment with what they could do. Schafer said that in modernizing the genre with Broken Age, streamlining the process was a big part.

"Deep down, we realized there really was always one verb, which was 'interact with', and a lot of it was context-based," Schafer said. "So in this game we've actually done that like modern adventure games like Machinarium have done. It's context-based."

Schafer said that while the game still includes puzzles, it's less about figuring out the right dialogue option and more about paring it down to the most interesting choices. 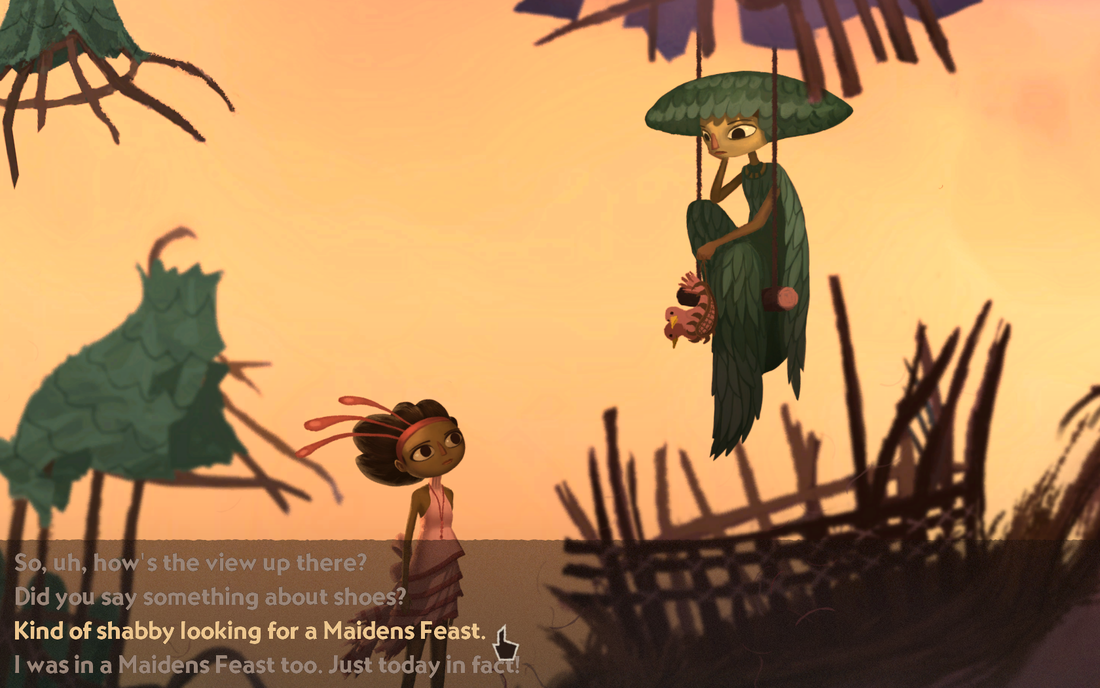 During our demo of the game, we explored a pastel pink, cloud-based world as the game's heroine, Vella. The game's interface did not feature stock actions at the bottom, but instead allowed us to simply click and interact. Every time we spoke with a new character, a handful of conversation options would crop up. Each new talk became a lifeline to figuring out where to head next. After speaking with one character, we were able to obtain a ladder. This in turn allowed us to grab a knife, which we then handed off to another character. As our inventory grew, new puzzles and pathways opened up.

Using our items was another simple process — one that hasn't changed too terribly much from the LucasArts classics. By simply dragging them out of our inventory, they popped up on screen and — when used correctly — allowed us to move forward.

"There are parts of the game that are kind of unconventional in how they're structured because we're trying to have fun with the genre a little bit," Schafer said. "But [the demo area] shows the character walking around pointing and clicking, talking to people, getting dialog trees and using inventory items to solve puzzles classic-adventure game style."

The first half of Broken Age will be available via Steam Early Access in January 2014.