The sweat and feedback of Xbox Fitness

Share All sharing options for: The sweat and feedback of Xbox Fitness

Xbox Fitness is the personal trainer who won't yell at you. It's the trainer who's equipped to guide you through a multitude of different workout styles, from the intense Insanity series, to the dance-based approach of the Tracy Anderson method, to more conventional aerobic exercises. It's the trainer who can monitor your heart-rate and the number of calories you've burned.

Short of helping you with equipment, spotting you and holding a bucket just in case Insanity gets a bit too insane, Xbox Fitness is possibly the next best thing to working with a trainer.

Developed by Microsoft and first announced back in September, Xbox Fitness is a subscription-based service that gives Xbox One owners access to dozens of workouts with famous trainers. At launch, the service will have more than 50 individual workouts, ranging from Shaun "Shaun T" Thompson's Insanity program, to Jillian Michael's workout series, to the P90X program and the Tracy Anderson Metamorphosis series. Most of the content will be brought over from various workout DVDs, but there will also be some custom content designed by the trainers specifically for Xbox Fitness.

But when your muscles are burning and you're sweating like a champagne ham, it's probably for the best.

During a demo of the game, Microsoft Studios showed how the Kinect is not only capable of tracking the player's body, it can also measure temperature, notice changes in color in the player's face and know which muscle groups are being activated during exercise. A model of the player stands in the top corner of the screen, mirroring the player's actions. As the player stands on the spot, leaning from side to side, we see the model's thigh and calf muscles light up as weight transfers from the upper leg to the lower leg.

According to the general manager of Microsoft Studios, Dave McCarthy, the game puts a physics model over the player's skeleton to determine when and where weight is being transferred in the body, and to monitor muscle tension. When the model's muscles light up, it's because the player is performing the kind of movements that would activate those muscle groups.

"We know which muscle groups are working because, given the way the player's skeleton works, we know that when you're moving your arms a certain way at your demographic and for your body type overall, we know you're going to exert this much force on that part of your body," McCarthy told Polygon. 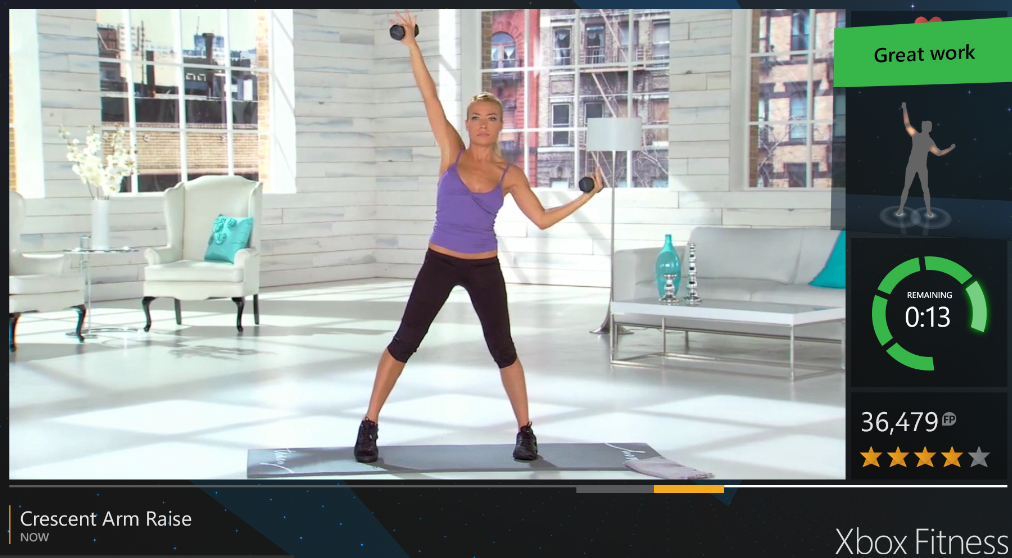 This feedback can be useful for players who want to track their progress, and it can also fuel competition. Xbox Fitness lets players see how they've performed compared to others in their demographic, and players can opt to take part in challenges to see if they can do better than their friends or their age group.

The service will be free in its first year for those who have Xbox Live Gold memberships. Microsoft intends to support Xbox Fitness by adding more content after launch and eventually introducing more workouts by different trainers.

Xbox Fitness might not be quite the same as having celebrity trainers — handsome and glistening — hovering above you counting as you perform your hundredth squat. But when your muscles are burning and you're sweating like a champagne ham, it's probably for the best.