Project Spark could be the world's first game about acting

Share All sharing options for: Project Spark could be the world's first game about acting

Unique among Xbox One's 'launch window' titles is Project Spark, which alone, defies standard genre classification. It is one of the few games in the world that allows players to stand in front of the TV screen and act.

This though, is not its core promise. It's a world-builder, a chance to creatively shape and sculpt landscapes according to your whim. The 'game' is the creation of other games, dropping pre-formed characters into your world and arranging them in such a way as to provide challenges for a protagonist, who you also create. Finally, it's a social toy, a way to use Kinect to create tableaux and stages to act out on-screen fantasies, to recreate favorite movie scenes or to just transpose yourself into the screen and into the game you are making.

Players select terrain tools and sweep across their worlds, transforming blank canvases into rolling meadows luxuriating in flora, or shifting dunes, dotted with rock towers. They can dictate water or vegetation levels. This breadth of control fulfills a desire to create on a grand scale, seen in such games as Minecraft or SimCity. The developers at Team Dakota talk in terms of social sharing, of expressing self through a kind of art that sits somewhere between absolute unfettered creativity and Instagram-style color-by-numbers.

Once the world is rendered, players then turn to the characters that will yomp and stroll across its hills and dales. You can create an isometric shooter or a third-person platformer. Other choices are available and more are likely to be added. Like Minecraft, this feels like something that will develop over time, thus the use of the word 'Project' in its name. 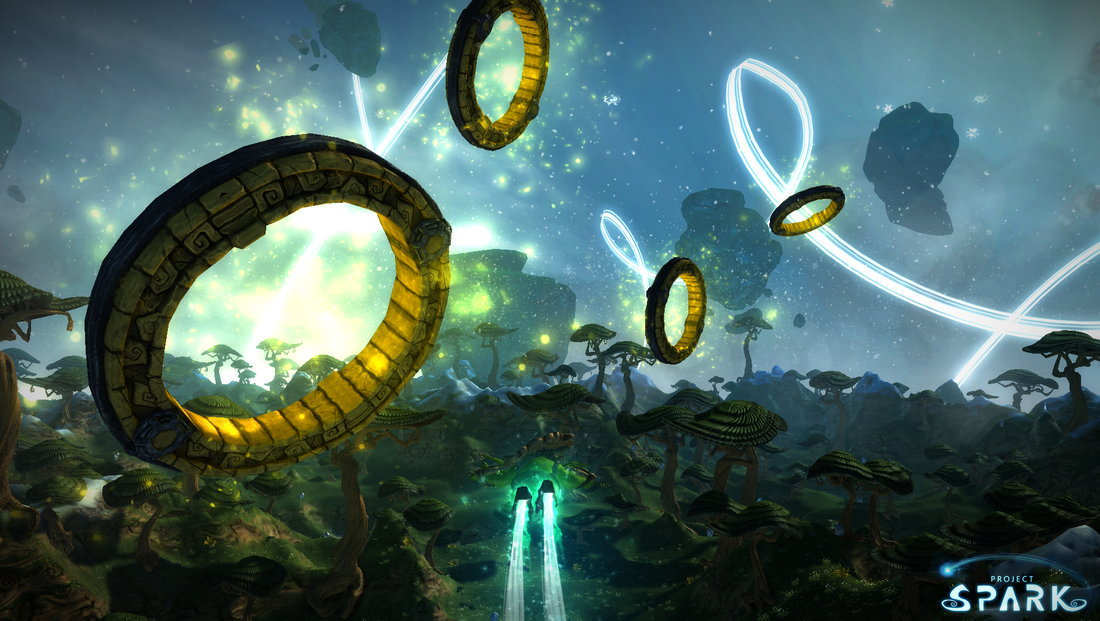 Your characters come from a set of customizable templates, fantasy life-forms (trolls, squirrel-men etc.) that can also be resized into giants or midgets, that can be dressed and ornamented. Their behaviors too, can be altered. A logic tool is presented that approximates the outlines of AI programming. If X happens, what will your goblin do? Pull-down menus allow you to choose if the goblin flees or fights.

This is where the product wanders into the realm of game design. During my preview, there was no way of knowing how well this works in reality, but goofing around with the behaviors of multiple characters in a world of one's own creation looks like fun, assuming they do what they are told.

Kinect is utilized to place the players themselves into the game. During my demo, I foolishly suggested that we attempt to recreate a famous moment from a movie, inside the game. A few moments later I was standing in front of dozens of people yelling, "Woo,hooo, I'm king of the world," arms akimbo in Christ-like pose. My character on-screen had been placed at the prow of a makeshift liner. He was doing exactly what I was doing, including my moronically excited facial expressions.

Me as a young Leonardo DiCaprio in Titanic, this small moment of cinematic history, now exists as an animated avatar that can be shared and utilized in game-worlds. That is its practical effect. Less tangibly, it was also one of the very, very few occasions in my life when I have been called upon to 'act'. I'd be a liar if I pretended to not feel the buzz of abandon, of being something else, as well as the thrilling mortification of public spectacle.

This is where Project Spark also aspires towards those other physical creativity games like Dance Central or SingStar, except those games are about mimicry, while this, potentially, is about creativity. Sure, there'll likely be plenty of simulations of Star Wars moments (during my demo I was briefly tempted to do "I am your father"), but you can act out anything that you want.

"Our game is about you making whatever you want to make," said executive producer Saxs Persson. "It's the perfect application for Kinect, where you go in and you can make your own rendition of Macbeth, or your terrible jokes, or just making obscene gestures while jumping up and down. It's entirely up to you."

Naturally, this being Kinect, it's far from perfect. As Persson says, you won't be able to simulate a complex 3D fighting game in Project Spark. But it is a whole lot better than anything we've seen before.

"We can capture your full body, your face, your hands, your eyebrows, your voice, and apply it to any character in the game," he said. "It works."

The character inside the game is based on the templates available, there is currently no way to scan yourself into the game. But, again, this is a work-in-progress. "We've had a lot of requests for it, and we're all about listening to what people actually want," said Persson. "But for now we've said, look, let's break down the barrier of putting yourself in the game."

Project Spark has enough on its plate, introducing a new kind of play, with a new technology. It also offers cross-platform play on Xbox 360 and Windows PC. But this is an indefinable product, a work of derivation, certainly, but also of originality and risk. One that invites people to, literally, act differently.

"When people play, it genuinely breaks down a lot of barriers," said Persson. "You'll be amazed by what people do once they see that on the screen. Their inhibitions just disappear."

Correction: An earlier version of this story stated that Project Spark is a day-one launch title for Xbox One. It is expected to arrive post-launch.