Most people's experience of a Kinect is likely Kinect Sports, the 2010 launch game for Xbox 360's motion control device.

It promised to allow people to play soccer, table-tennis, boxing and other pastimes using their own body movements, just as they would in real life, instead of the more abstract use of button-presses.

To some extent, Kinect Sports proved that motion control had advanced since its early days with PlayStation Eye and the Wii. Kinect was a genuine innovation and Kinect Sports was its mass-market delivery mechanism.

It was successful insofar as it sold well, but it also exposed Kinect's weaknesses, its limitations as a technology. The machine was not always accurate. The individual games felt restrictive and unsatisfying for any length of time. Kinect was a fad.

For 2014, Kinect Sports Rivals aims to show how the new Kinect with Xbox One can deliver an improved performance. This is a heavy burden, especially if Microsoft's console continues to be priced at $100 more than PlayStation 4, on the basis of bundled-in Kinect's extra value.

Adding to the weight of responsibility, Rare's game was delayed from a planned hardware launch arrival to the spring of next year. One sport from the package, wake racing, is being offered as a free download at launch. And it is this one slice of the final game that Microsoft demonstrated at a recent press event. Kinect Sports Rivals other activities will include climbing, soccer, target shooting, bowling and tennis.

Kinect Sports Rivals seeks to take advantage of the new Kinect's abilities to see and process more detailed information. What this means in practical terms is as follows:

Added together, all this is more complex than anything offered by previous games in the series which generally required very clear swinging motions from leg or arm. 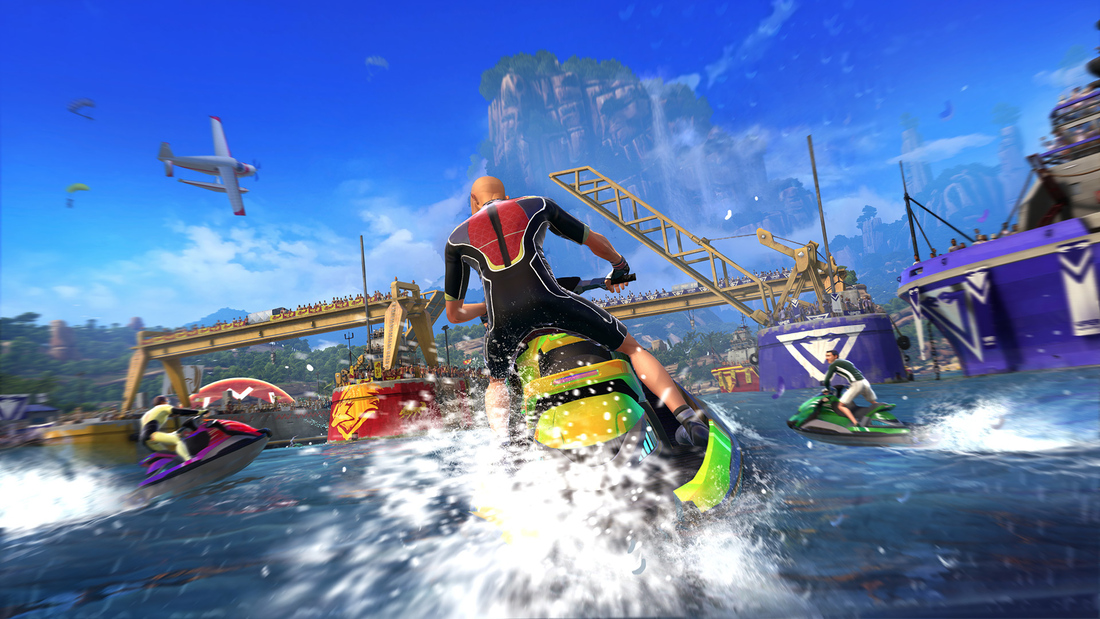 "With the new sensor, it's much more accurate," said executive producer Danny Isaac. "Rather than having to flail around to get the response you need, you can have very subtle movements. And in fact, with the wake race trial we have here, you can actually play sitting down as well. But still, the experience is getting up and having fun like that. It's much more accurate than it was previously."

With the graphical ooomph of Xbox One, this game looks so much better than those arcade efforts of the previous generation. Wake racing is a chase game in which acceleration, braking, turning and shortcuts all matter. Isaac and I played some head-to-head split screen and there were no pick-up problems from the Kinect and no on-screen slow-down.

"It uses the camera to lock on to your skeleton and knows who you are," said Isaac. "It's much more finely tuned, so fewer things get in the way. It keeps a lock on you, so it's much easier to play with friends and family around." He predicted that many families would be playing this free download on Christmas Day. "Every time I demo this game, people smile and have fun." he said. "Every single time."

The roguelite management sim that’s impossible to put down

League of Legends has a multiverse too, and it’s packed with mysteries