Share All sharing options for: Tim Schafer's take on 'good puzzle theory' and being stuck as entertainment

When Tim Schafer and Double Fine Productions made the decision to return to the adventure game genre with Broken Age — the Kickstarter-funded game previously known as Double Fine Adventure — the veteran game creator turned to his peers for fresh insight.

The adventure game creators Schafer talked to, he explained at a panel at GDC Next today, included his former LucasArts colleague Ron Gilbert, Machinarium designer Jakub Dvorský and Superbrothers Sword & Sworcery EP co-creators Craig Adams and Kris Piotrowski. Those creators of classic and modern-day adventure games offered differing perspectives on the use of puzzles in adventure games, and how they've evolved over the past few decades.

Schafer recounted a story about a puzzle that frustrated him in PlayStation 3 title Uncharted 2: Among Thieves, a game he said he liked, but illustrated one shortcoming in modern puzzle design: a lack of faith in the player. While playing the game and theorizing ways to solve a climbing puzzle, Schafer said he began to have flashbacks to the first Tomb Raider. He was looking for cracks in the walls and clues in the architecture that might provide a hint, but the game cut him off with a tip, essentially answering the puzzle for him. "I was just about to figure that out!" he said, self-deprecatingly, "That's so annoying!"

"There's a real entertainment to being stuck in the right way."

"I realized I really did still like puzzles," Schafer said of his researching phase. "Someone who is complaining about puzzles, they're really just complaining about bad puzzles. There's a real entertainment to being stuck in the right way."

Schafer outlined his "rough version" of good puzzle theory, saying puzzles in adventure games in the vein of Grim Fandango and The Secret of Monkey Island are better when they follow certain guidelines.

First, they should have a very clear obstacle. Players should be able to see what's blocking their progress. The game should show them what it is. They should also have a clear motivation to overcome that obstacle. Puzzles should inform players "why they want to cross a ravine," for example. "Not just because the ravine is there," Schafer said. "Put something on the other side they really, really want."

Designers should provide players with responses if they attempt a non-working solution, not just reject their answer to a particular piece of the puzzle. They should provide hints when players fail and rewards when players get close to solving a puzzle. Schafer likened the game's role to that of an older brother, saying "You're getting there. Keep working on it."

Completing a puzzle, Schafer said, should provide a sense of "A-ha!" and not "WTF?" He warned against stupid, nonsensical solutions that would make players think "That was so obvious!" in hindsight. 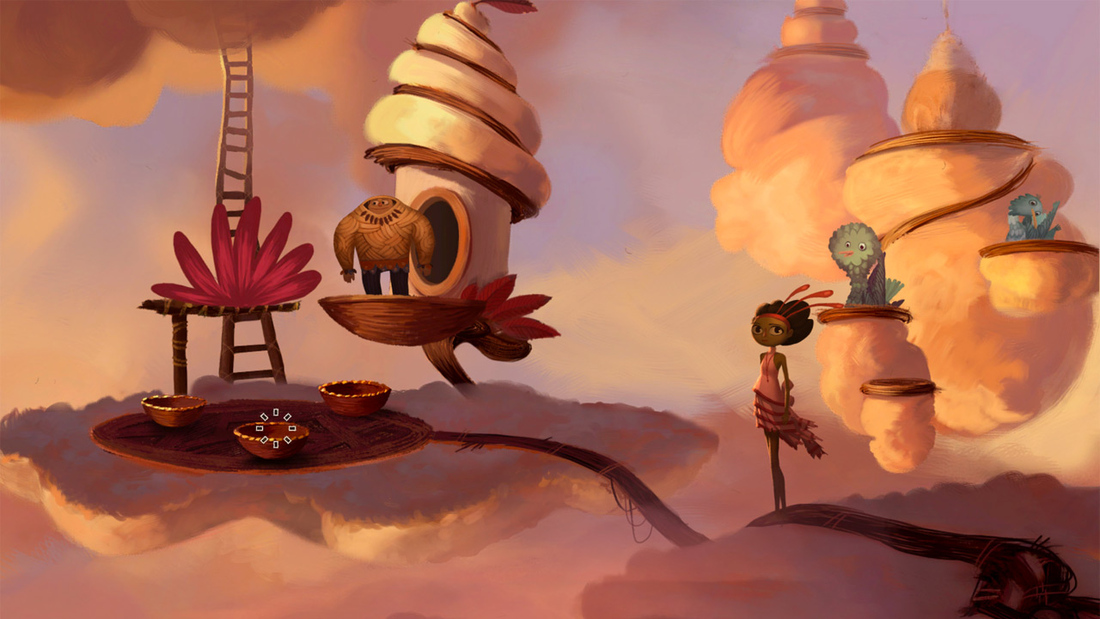 Playtesting puzzle-rich adventure games like Broken Age is important to ensuring that those guidelines are adhered to.

These days, Double Fine playtests games like Broken Age about three times a week, which he said helps "realize the things that were totally unfair about your design." Bringing a pair of friends in, allowing them to play cooperatively and talk about puzzle-solving solutions is key, he said, because players better vocalize what they're thinking while they mentally navigate puzzles.

Broken Age, Schafer said, also represents a very clear simplification of the adventure game interface, which has seen its number of verbs decrease over time. Maniac Mansion, he said, had about 15 verbs players used from the game's interface. With The Secret of Monkey Island, the number of verbs dipped to nine; Full Throttle, to four; and with Grim Fandango, essentially two action verbs. Every verb now is just "use," he said.

While "it was important to keep certain elements old school" with Broken Age, he said, Double Fine wanted to modernize other aspects to make them better, and better looking.