Diablo 3: Reaper of Souls' Adventure Mode lets players "go anywhere, slay anything" by giving them access to all of the game's waypoints, allowing them to hop around maps and acts to kill what they choose. In Adventure Mode, players can take on bounties, which the dev team described as your tour guide, offering destinations and events for player to see.

Stephen Wong, senior software engineer, called Adventure Mode an open world take on Diablo 3 peppered with goals to showcase all the content the game has to offer. Randomized bounties in the new mode will consist of a handful of types: boss fights, completing a special event like Last Stand of the Ancients in Festering Woods, killing a unique monster and clearing a dungeon.

Some bounties are designed to show players areas of the game that are "off the beaten path," Wong said. Others are designed to show certain events in another context. For example, players may be tasked with killing Mira Eaman, a unique monster that players kill early in the game as part of a mandatory campaign event. She may appear as a unique monster in a bounty, dropping her into the distribution of monsters out on the woods.

Completing bounties gives players "glittering prizes" in the form of item drops and Rift Keystones. Those keystones can then be used in Reaper of Souls' new Nephalem Rifts. 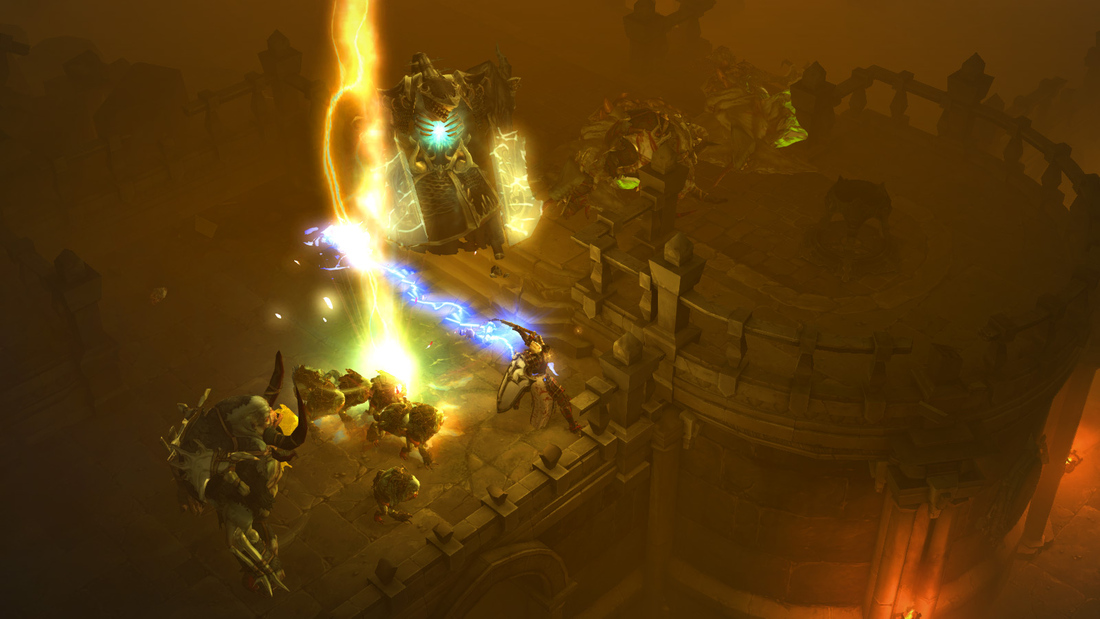 Senior level designer Jesse McCree says those new areas are randomized dungeons, taking bits and pieces from the entire game and putting them into a self-contained dungeon experience. Nephalem Rifts will bring together monsters from various acts, and drop them into varied environments. As an example, Blizzard showed a shot of a player fighting enemies from Diablo 3's Act IV and Act III in Whimsyshire, the game's secret, rainbow-drenched level.

Nephalem Rifts are designed to break all the rules of Diablo 3, by bringing together never before seen monster combinations and throwing highly randomized monster density at the player. "This is where things can get a little out of hand," McCree said, as players may face huge populations of monsters — and bosses, which will spawn alongside mobs.

Rifts will also break the game's rules when it comes to player buffs. Players may be granted immense power through "crazy buffs," including one-hit kills, invulnerability, area of effect lightning attacks or instant cooldowns.

Diablo 3: Reaper of Souls will also introduce new breeds of monsters and new enemy behaviors. Some of the more interesting beasts will appear in the expansion's Blood Marsh area and include Brutes and Boggits, big and tiny creatures that work together. Brutes can summon Boggits and aggressively attack by lobbing the little guys. When Terror Bats are added to the mix, things get hairy. Those bats can bite little Boggits and mutate them into Brutes, which can then, in turn, spawn more Boggits.

The most interesting new addition to the bestiary is the Realm Walker, a hulking beast that spews forth creatures from an interdimensional portal on its back. Kill the Realm Walker and you can enter the portal yourself, entering a mini-dungeon in the midst of another battle.

Blizzard is also tweaking the behavior of existing monsters. One example is archers, which in the current version of Diablo 3, if they want to move away from the player, must stop firing, turn around, relocate, turn back and resume firing. In Reaper of Souls, enemy archers will be able to walk backward as they retreat with no interruption in their firing.

We'll have more details on Diablo 3: Reaper of Souls from BlizzCon 2013 soon.