In Arkbreaker, players will be exactly that — Arkbreakers, investigating and clearing summonable dungeons packed with baddies and new gear. The pack is available on PlayStation 3, Xbox 360 and Windows PC for $9.99 and free for Season Pass holders. Players who purchase Arkbreaker will receive access to a ton of content exclusive to the DLC, including a new mission line that allows players to call down arkfalls, bonus challenge areas for up to 24 players. Once these arkfalls have been brought to the earth, players can tackle them solo or in a group, racing against the clock to secure an ark-brain interface — something that controls the floating arkfalls — before the enemy can.

To conquer these arkfall sites, players will be given access to a new set of cold-fire weapons from the Volge — an alien race always hungry for war — which include sniper rifles, assault rifles and pistols that are steps above regular weapons in power. Arkbreaker comes with 20 of these new weapons, along with a Volge engineer outfit to complete the set. The weapons available with the DLC are essentially a "starter pack of Volge gear," according to Defiance creative lead Trick Dempsey. Spikes, stims, grenades and other consumables are also included in this pack, but only Arkbreaker DLC owners will be able to equip the Volge weapons.

There are two types of arkfalls: major and minor. Minor arkfalls are simpler and smaller and the insides of the ark are packed with high technology. These smaller arks contain one or two rooms filled with high-level enemies that can only be taken down in a group. These arkfalls also only require one spike to summon.

Major arkfall sites take a more expensive toll, requiring more spikes to summon. One person can purchase or hunt down all the spikes on their own, but Dempsey noted the payout is "much easier" if the summoning is split among players. Once an arkfall is down, other players can come in and join the fray along with the player who summoned it. 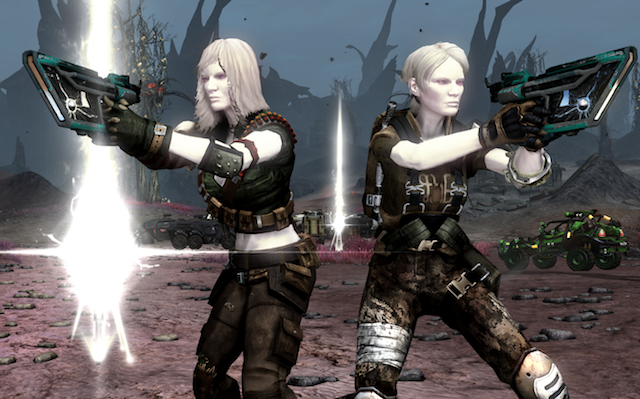 Arkbreaker also includes a new boss challenge — the Volge Warmaster. In this showdown, up to 20 players have seven minutes to defeat him and earn the high-quality loot he drops. The Warmaster is covered in crystalline plates that shield his body; dealing damage to these plates will cause them to break off and allow players to hit his glowing orange underskin. Failure to subdue the Warmaster will allow him to leave the arkfall and run free to wreck havoc in other areas within Defiance.

"He's completely different from anything we've thrown at players before," Dempsey said. "His AI knows how many players there are and will adapt to it. He's the ultimate machine of war."

Gamers that don't purchase Arkbreaker won't be completely left out, however: as of today, all players have access to new powerups called spikes and stims. Spikes gives players' offensive and defensive buffs, while stims boost strength, speed and increase healing rates. They also add extra abilities, such as allowing players to deal extra damage within the radius of the spike and throw five grenades rapidly one after another.

"These items will be major game changer to how combat works inside of Defiance," Dempsey said.

Spikes will be especially important and not just for boosting player stats: spikes are the items players will use to call down arkfalls. Each arkfall site requires a certain number of spikes to call it down. Spikes, glowing rod-like objects that float in the air, can be placed at certain sites to call down the ark. Spikes can also be planted in areas to feed nearby players' boosts, such as a 30 percent damage boost. 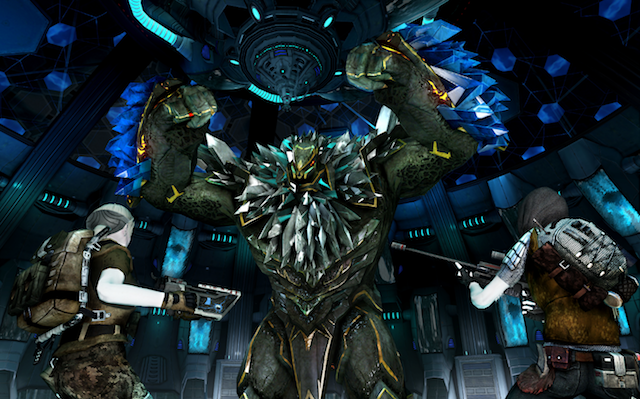 "It becomes a major area control component of any fight," Dempsey said, noting that once a player puts down a spike, any other player can walk up to it and receive the same boost.

"You're more likely to survive the entire affair if you bring in more people," he said. "It won't reduce your individual rewards in any way, shape or form."

New daily and weekly login bonuses have also been added, and all missions within the main storyline of Defiance have also been tweaked to be fully cooperative. Groups can now team up to complete them, whereas previously they were only available as single-player experiences.

Dempsey also noted that the addition of arkfalls players can summon is not meant to cheapen the appearance of other, already existing arkfalls — which are made of debris from a destroyed spaceship fleet that still orbits the earth in a ring — but rather to augment them and further explore their lore. There is a "limited resource" to summon these arkfalls, Dempsey said, due to their cost. A spike costs 10,000 script (Defiance's in-game currency) to purchase, but players will receive keys for arkfall spikes automatically as well. Players can call down one minor arkfall a day, or save them up over several days and call down a major one.

There is no particular level, or combat rating, players need to be to tackle these special new arkfalls, Dempsey said. Developer Trion Worlds wanted to keep content for Defiance accessible to all players, no matter how far along in the game it may be, Dempsey said.

"Our philosophy is basically, 'the arrival of a new player should always be a positive experience," he said, "and you should never feel excluded when you arrive to content."