Killer Instinct is an unlikely candidate for the renewed affections of a generation who grew up on developer Rare's games. But somehow, it's 2013, and the series that last saw release on the Nintendo 64 with Killer Instinct Gold has been relaunched with the Xbox One.

Rare has handed the series to developer Double Helix with a tough job: to take the unique, interlocking combo system and outlandish character designs that defined the series and revamp it for a modern audience.

To their credit, Double Helix has done an admirable job — so far. As it stands now, at the Xbox One's launch and the end of 2013, Killer Instinct presents a great set of mechanics and an excellent effort to bring new players into fighting games. It also presents a game that feels very much in "beta," waiting to be finished.

Released during a period where practically every week marked a new fighting game in arcades, the original Killer Instinct's hook came from its combo system, which Double Helix has brought back and tweaked. Using an opening special move, players could then use a corresponding basic attack to execute several hits which then linked another special move, and so on. The depth came from stretching combinations as long as possible, mixing things up enough to avoid a countering combo breaker from the other character. 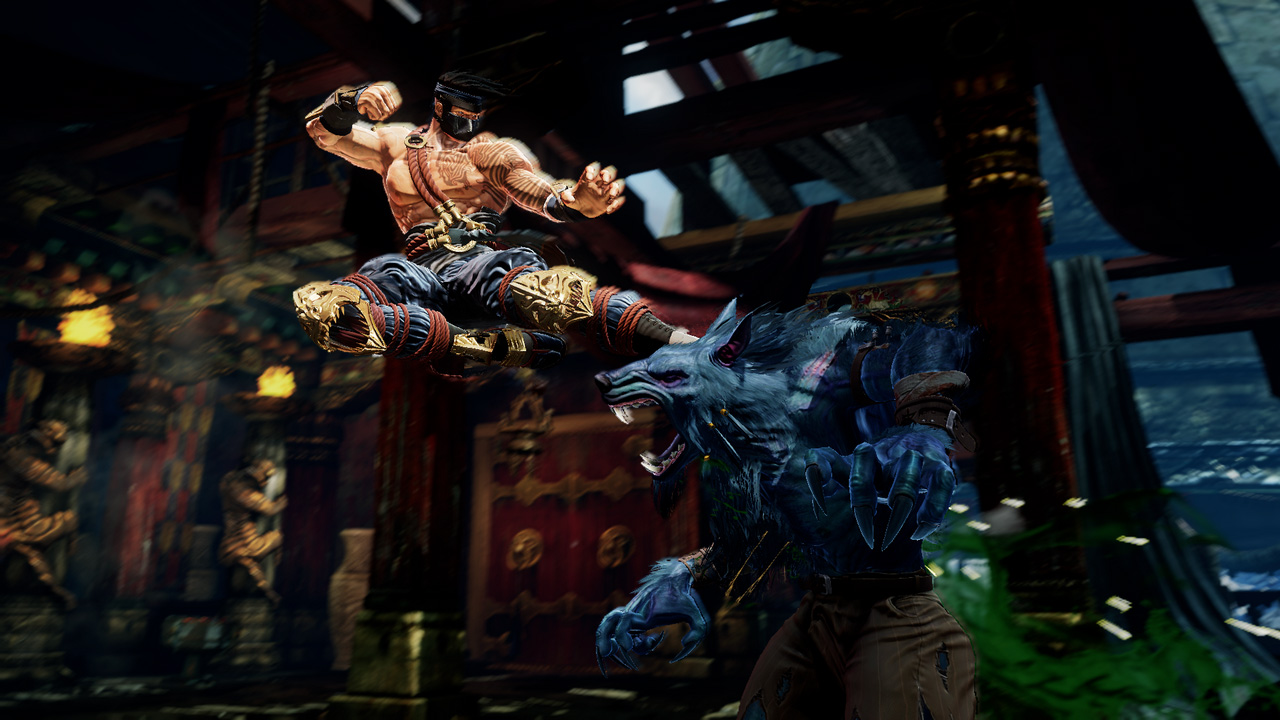 This new Killer Instinct still links moves in a similar way, but has added additional complexity. There's a more interesting interplay between light, medium and heavy attacks, and things feel a little freer, a little less canned. But more work has been done to shore up Killer Instinct's basics.

This is something of a double-edged sword.

There's not much in the way of a central narrative holding Killer Instinct together — it's a throwback to the era of fighters fighting for ... whatever. From its over-the-top announcer (making a return from the original series) to its character designs, Killer Instinct feels like a game with all of the aesthetic concepts of the original series pushed through a next generation workflow. Occasionally, this is great — the soundtrack is a phenomenal and fun reimagining of fighting game themes from 20 years ago, and the enthusiastic commentary is propulsive.

But Killer Instinct's dated presentation trips over the series' roots. It can be a little hard to handle some of the more blatant stereotypes and overt sexualization of Killer Instinct's currently available roster of characters. Both Orchid and Sadira are, well, let's say excessively buxom, while Thunder is about as racially sensitive as the Redskins' mascot.

Should I clarify that Orchid is introduced with her ass pointed at the camera?

Did I mention that Sadira's (a Persian name) outfit is derived from stereotypical harem outfits and her unlockable costumes include a genie getup? Should I clarify that Orchid is introduced pre-fight with her ass pointed at the camera, and that she first twists her back to highlight her breasts, then does an open legged scissored handstand to get into her defensive pose?

For the latter at least, this is a clear callback to the character's appearance in the 1994 original. In the abstract, I appreciate the clear desire from Double Helix to remain true to the spirit of the original series. But these characters' depictions are tone deaf and offensive, and being a fighting game doesn't let it off the hook.

It's all the more frustrating because of how forward-thinking Killer Instinct is as a game. More than any fighter I've played in years, KI wants you to understand it, and learn how to play it. The Dojo mode walks you through a series of lessons designed to break down the intricacies and particulars of the game's mechanics slowly and in a hands-on way. The absence of a tool like this in other fighting games could be the genre's biggest barrier to new players and a wider audience, and Double Helix has done a remarkable job in providing an educational experience to bridge that gap. The Dojo mode should set a new standard for fighting games with competitive aspirations.

Killer Instinct exists in a bizarre limbo state between a free-to-play game where you buy characters, and a fully paid downloadable fighter. If you're not interested in putting down the 20 bucks for the full version of the game, you get starting character Jago for free, and can buy everyone else piecemeal. Players without every character aren't segregated online, at least — everybody is matched against each other regardless of what characters they do or don't have.

Killer Instinct also excels with online play. Matches felt lag-free in exhibition and ranked modes, and after a couple of weeks, there's a fairly steady playerbase already. This is good, since the game is absent much in the way of singleplayer content. You can play one-off CPU matches or survival mode — which pits you against an unending series of opponents, with only a limited amount of health restored between bouts — but there's no proper arcade or story mode to be found. Double Helix has alluded to updates down the road for solo players, but for now, Killer Instinct is light on frills and content. Even the character roster is slight, with a meager six characters at launch and the addition of two more planned for early 2014.

The spirit of Killer Instinct remains sometimes painfully true to its roots, but Double Helix has competently filled the gaps in the original's foundation. They've also laid new groundwork to teach players how fighting games actually work. For now, Killer Instinct feels like a beta â but next year, it could be something much more.

About Polygon's Reviews
7.0 xbox one