Share All sharing options for: Playing Yaiba's Kanye to Ryu's Jay-Z in a 'gonzo' take on Ninja Gaiden

If nothing else, Yaiba: Ninja Gaiden Z is full of little surprises.

The upcoming spin-off from the main Ninja Gaiden series, a collaboration between Team Ninja, Comcept and Spark Unlimited, bears little resemblance to the games that star master ninja Ryu Hayabusa. The new Ninja Gaiden game, one infested with zombies and starring anti-hero Yaiba Kamikaze, is carving its own path — for better or worse.

I've played Yaiba a few times before, and found its approach to third-person combat action wildly different from Team Ninja's games. Yaiba frequently faces massive numbers of undead enemies at once, instead of the handful that Ryu often takes on. That leads to screens filled with zombies, cartoon gore and flashy combos.

It also lends the game a quality that makes its action feel more akin to the God of War series, with far-reaching flail attacks for crowd control paired with more powerful, shorter range heavy attacks with Yaiba's sword and cybernetic fist. There's an overall feeling of less-demanding precision required inYaiba, than in previous games. But it's not always a refreshing change.

Here's an example, based on a recent hands-on preview of the game. At times, the game's camera will pull back, offering a wider view of the battlefield than Ninja Gaiden players are used to. In one sequence, Yaiba faced dozens of undead grunts and soldiers, all while being harassed by a missile-launching attack helicopter. Yaiba's recourse here is to grab those missiles as they're just about to hit him, then lob them back at the chopper. That's harder than it sounds, based on the fact that Yaiba is actually tough to pick out of a crowd of zombies, what with all the cel-shaded gore and tiny characters filling the screen. 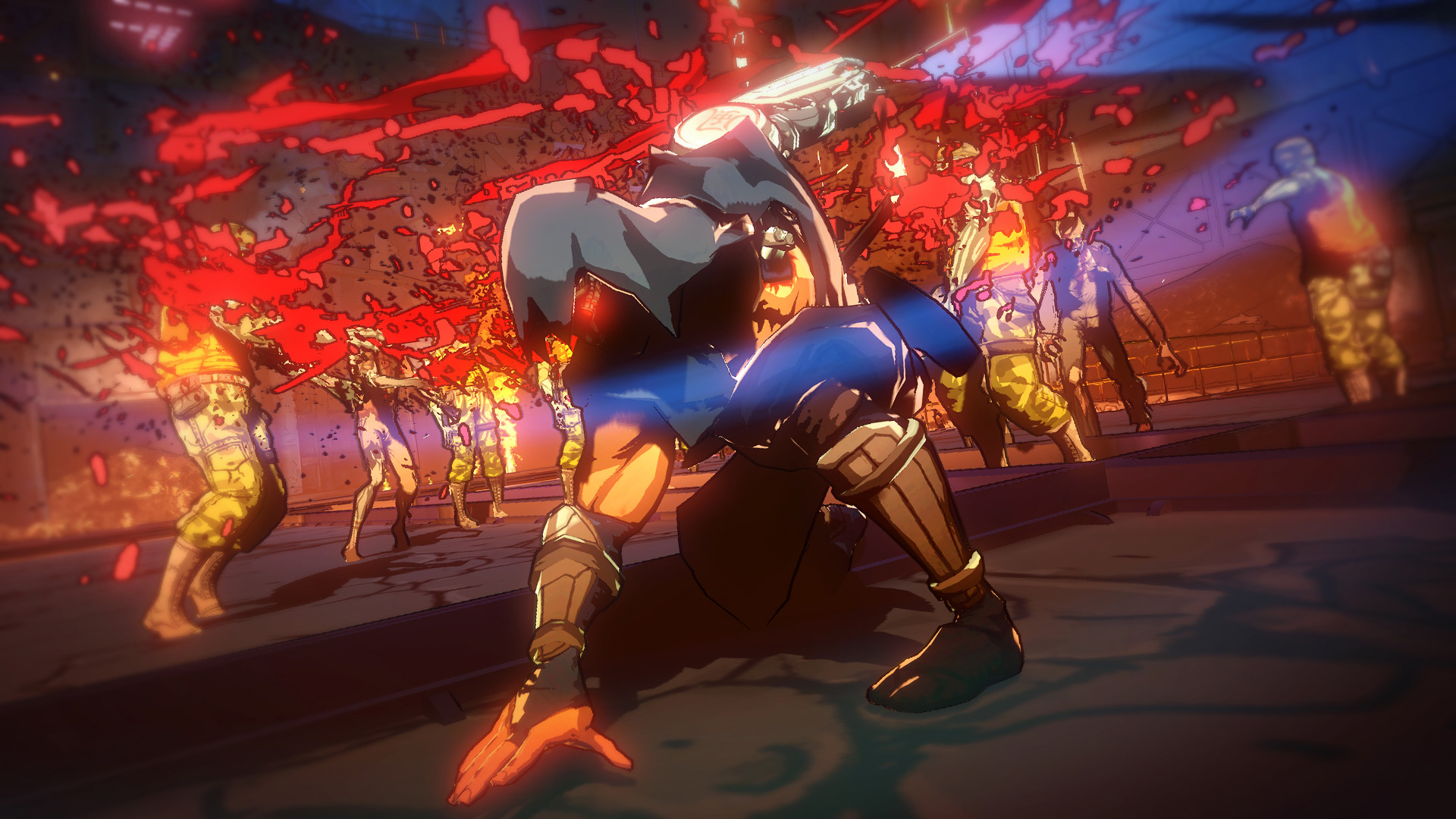 It was a frustrating sequence, and no in the traditionally difficult Ninja Gaiden way, and one that I lucked my way out of by tossing an exploding zombie Hail Mary at the helicopter.

In addition to a very different take on combat, Yaiba: Ninja Gaiden Z also places a unexpected emphasis on puzzle-solving. The game's puzzles can be solved by exploiting its various zombie types. For example, Bile Zombies, which spew blinding toxic goo at Yaiba, can be picked up and thrown into electric fences, which for some reason then crystallizes that bile. Those bile crystals can then be shattered to break down structures, opening up new areas for Yaiba.

Grenadier Zombies, as one might expect, can be picked up and thrown to explosive effect. That comes in handy when trying to break down walls or when Yaiba's being attacked by a helicopter.

Yaiba will also have the option of using discrete body parts from the game's undead. Certain monsters, identified as "sergeants" by Spark Unlimited, will give Yaiba limited-use weapons when killed. A clown zombie called the Sidesplitter will dispense a weapon called "nun-chuckles" after Yaiba rips his arms from his body. The resulting weapon leaves a rainbow-streaked trail when Yaiba attacks with the clown's disembodied arms.

Combat is further fleshed out with a perks system that allows Yaiba to unlock new and improved skills, defensive measures and combos. As the player earns experience, they'll unlock new perks, which tap into the game's elemental systems. Yaiba can gain new elemental attacks as well as elemental resistances. He'll also have the option to unlock perks that combine elements, like Static Storm, a deadly combination of fire and electricity, and Plague, a noxious cloud that can have an effect both on enemies and Yaiba himself.

Other perks include execution chains, allowing Yaiba to string together health-restoring finishing moves, and a skill called Ninja Time, which slows down the action when players time their counterattacks properly.

In the early levels I played, Yaiba Kamikaze did not come across as grating as he has in previous trailers. He's still far more abrasive than Ryu Hayabusa, and not very likable. He's spews expletive-laden, frequently misogynistic lines that, meant to be funny, more often fall flat. He's tolerable, at best, and it's perplexing to think that anyone would actually like this character.

"We're trying to have a lot of fun with this," Davis said. "Yaiba's in direct contrast to his counterpart Ryu. They're a lot like each other, but they're directly opposed to one another. It's this gonzo misadventure of this ninja killer, and unlike Ryu, he's actually really enjoying himself most of the time."

"Let's put it this way, if Ryu was Jay-Z, Yaiba would be Kanye," said associate producer Charles Babb. "We wanted to make sure it's in the same sphere [as previous Ninja Gaiden titles], but it's a very different game."

Hayabusa is "definitely present" throughout the game, Davis said. He's the one trying to stop the zombie outbreak, all while being hunted down by Yaiba and players will "see a lot more of him later on in unexpected ways," according to Davis.

One other component of Yaiba: Ninja Gaiden Z that might be unexpected is the game's arcade mode, known officially as Ninja Gaiden Z Mode. The unlockable mode lets players experience the game from a different perspective, turning the game into a side-scrolling brawler, a la Final Fight, Streets of Rage or the original Ninja Gaiden arcade game. The camera is locked in the arcade-style mode, something of a blessing given Yaiba's finicky camera.

Ninja Gaiden Z Mode will feature the core game's combat system, but with a pixelated visual presentation and chiptune-style music. It's where players will turn if they're looking for a more serious challenge, as health bonuses are much more limited. It will also feature more arcade homages, with top-down, Smash TV-style levels, a shooting gallery and other bonus stages.

Yaiba: Ninja Gaiden Z has its share of problems at this point. The game lacks the tight precision and more consistent frame rate of Team Ninja's previous efforts. Outside of a few combat encounters, playing as Yaiba simply isn't as empowering as playing as Ryu.

Spark Unlimited says that Yaiba: Ninja Gaiden Z is "heading toward beta," and the developer is fixing the game's camera, polishing its visuals and weighing playtesting feedback, hopefully work that will result in a better game. There's still the issue of Yaiba's personality, his wise-cracking and his creepy interactions with the lone female character we've seen, Yaiba's busty assistant, Miss Monday. But it's doubtful these design considerations will change much before Yaiba: Ninja Gaiden Z hits PlayStation 3, Windows PC and Xbox 360 in March.