Nintendo has a problem in the U.S. They've created a wonderful portable device that people don't seem interested taking with them when they leave the house.

For many, the ubiquity of smartphones and the rising quality of the games you can play on them, replaces the need to take a gadget with you designed to game and only game.

Sony looked to get around that issue by turning their PlayStation Vita into an on-the-go entertainment device. It has a high resolution screen, plays movies, music and can deliver games that look and feel like the sort you might play on your television.

Nintendo's approach to the 3DS, and now 2DS, problem is a bit more fanciful, and to be honest, the sort of thing you want to see succeed.

StreetPass is a service that allows a person's 3DS or 2DS to talk to other players' devices without you having to be an active part of that conversation. So you're walking down the street with your 3DS and pass someone else with the portable, and the two devices do a little electronic handshake and exchange information. And then seconds or minutes later you get an alert that someone on this crowded sidewalk, somewhere, is also a gamer, is also a fan of Nintendo's games and maybe even plays the stuff you play.

That exchange can be tied to a variety of games, each of which offer their own perks. But StreetPassing is always tied to the little cartoonish Mii avatar you created who delivers to these anonymous gamers a friendly hello, a personalized message and information on what state or country you live in.

Collecting these Miis has become a bit of a hobby for fans of the service, and a handful of games created around Mii collection are now available, each allowing you to build up a group of Miis you find in the real world to tackle in-game challenges.

It's a clever idea, one that blends the safety of anonymity with a sense of community. 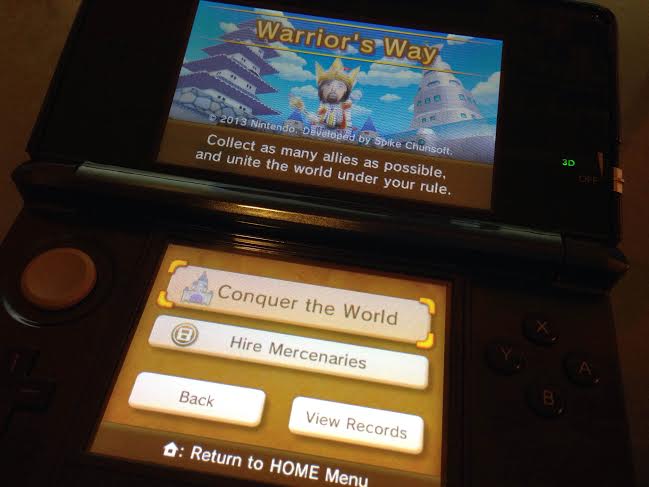 But there's a catch: You have to take the 3DS out with you.

In some places, particularly in Japan's crowded cities, that's not an issue, but much of the rest of the world don't seem to have the same enthusiasm or perhaps condensed gamer population. Nintendo has already tried to fix this problem by teaming up with more than 29,000 Nintendo Zone WiFi hotspots around the country and allowing them to store that Mii handshake so that two gamers can virtually, anonymously connect without actually passing one another. But that still didn't quite do it.

So Nintendo is trying something new, they call it the National StreetPass Weekend. This past weekend, not only did these hotspots store a player's Mii handshake, it also mixed them up with all of the other stored handshakes in the country, giving people a chance not just to connect with new people, but new people from across the country.

"Primarily what we wanted to do was really give 3DS owners an opportunity to experience what makes StreetPass fun," said Bill Trinen, Nintendo's director of product marketing.

In North America, StreetPassing has slowly become a thing that seemingly only occurs at planned events, not as a surprise everyday encounter, as it was initially intended. Fans of the service host meet-ups or spend their time hunting down other StreetPassers at comic book and video game conventions.

And those people seem to really like the service, Trinen said, but Nintendo wants more people to give it a try too.

The idea of a gaming community of strangers passing in the night is a wonderful concept.

The company decided to try their hand at creating an event of their own, one that they hope will encourage 3DS owners to take their systems with them when out shopping, going to movies, eating, and visiting families this holiday season.

And it sounds like this is just the first way Nintendo will be trying to kickstart their StreetPass service in places like North America.

"We are going to look and see how things go, to see whether it's something we can do again nationally or potentially internationally," he said. "There are other things we're looking at to leverage Nintendo Zone and StreetPass in 2014 too. We're batting around ideas with what we can do with scavenger hunt activities with StreetPass and Nintendo Zone."

Trinen said they're also playing around with the idea of creating Nintendo-game-themed crossword puzzles that would be distributed through the service.

One idea they're still not quite ready to consider is turning StreetPassing into something you can do from home using your own internet connection.

"If you're at home it becomes a little bit more artificial, a little bit less about encouraging the people who are enjoying the 3DS to take it out with them like you are. Then it's just random connections over the internet.

"There is something [magical] about encountering these people who are maybe like you, about feeling like you are part of the same community."

The idea of a gaming community of strangers passing in the night is a wonderful concept. It brings with it almost a sense of adventure and taps into the notion of gaming as a secret club with its very own special handshake. Now Nintendo just needs to get enough people together to make it feel worthwhile.

And once those gamers learn to bring their portables with them, maybe, just maybe, they'll buy and play more of Nintendo's games too.