By Samit Sarkar@SamitSarkar Dec 16, 2013, 6:13pm EST
Via The Verge | Source Zeke Miller on Twitter | Image The White House on Flickr

Share All sharing options for: President Obama to meet with Zynga, other tech firms about HealthCare.gov, NSA, more (update)

President Obama will meet with executives from 15 top U.S. technology companies, including Microsoft, Google and Zynga, to discuss a wide range of topics such as HealthCare.gov, the National Security Agency and the economy tomorrow, Dec. 17, reports Time's Zeke Miller on Twitter.

The meeting between the president and the tech executives will focus on "progress made in addressing performance and capacity issues with HealthCare.gov and how government can better deliver IT to maximize innovation, efficiency and customer service," according to a memo from White House officials.

This fall's problematic launch of HealthCare.gov, the online marketplace for U.S. health insurance that was established under the Affordable Care Act, won't be the only topic of debate at the meeting. The president and the assembled executives will also discuss national security and the economic effects of the leaks regarding the NSA's surveillance of online communications, as well as ways in which the government can partner with the tech industry to foster job growth and "address issues around income inequality and social mobility."

Here's the full memo, which includes the list of tech executives whom the president will be meeting with: 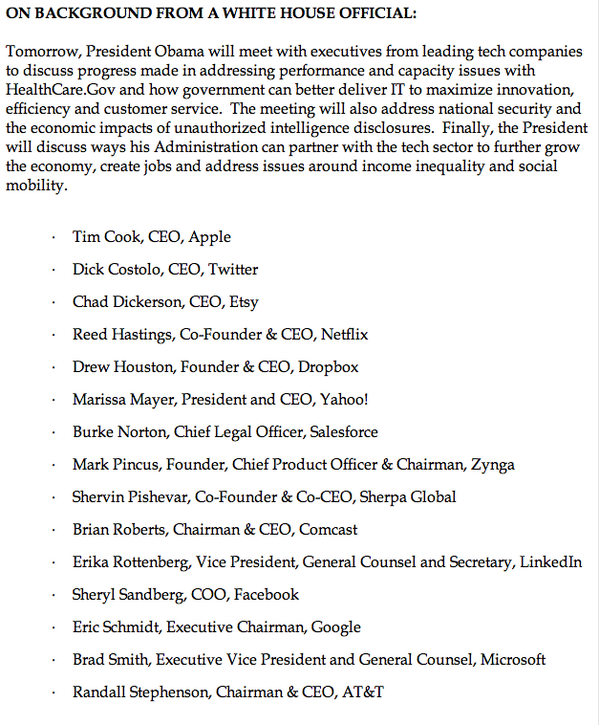 We've contacted to the White House and some of the tech companies involved in the meeting for comment, and will update this article with any information we receive.

Update: Representatives for Microsoft and Zynga declined comment to Polygon.