The Walking Dead Season 2 kicks off not with a bang but a flutter.

Titled "All That Remains," Telltale's latest release is emotional and well-written and tense. It's everything I've come to expect after the stellar first season and the excellent kick-off to Telltale's other episodic venture, The Wolf Among Us.

But the sheen of The Walking Dead's novel structure has worn off, and a few patches of rust are showing.

(Editor's Note: We've done our best to avoid any major spoilers for the first season of The Walking Dead in this review, but if you haven't played it and don't want any hints about the direction of the plot, it may be best to avoid this review for now. No major surprises or plot elements from this latest episode are revealed.)

Picking up after the traumatic events of The Walking Dead Season 1, "All That Remains" puts players in control of Clementine, the heartbreakingly sincere young girl we helped keep alive last time around. If you played Season 1, some of your choices will carry over, mostly seen in this episode through their effect on Clementine. If you didn't play the previous season (or no longer have your saves from it), this episode will automatically and randomly assign you choices.

It's a little frustrating that Telltale hasn't included a way for people to pick their own choices — whether out of curiosity or, say, because they lost their save to Season 1's notorious bugginess — but nothing from Season 1 has a major impact on the story so far.

The lack of ties to previous releases made "All That Remains" a more lukewarm experience than I expected. Season 1 spent a long time carefully building up a cast of interesting, flawed, lovable characters, but virtually all of them are out of the picture now for one reason or another. By its midpoint, this episode introduces a small gallery of new characters who are presumably going to get the same development, but too many names were thrown at me too quickly. Most of the new faces interact with Clementine as a group — there's just not enough one-on-one time to gracefully get across backstory and personality, which made it a lot harder for me to care about them.

The best parts of "All That Remains," then, follow Clementine alone. These sequences are long and tense, often forcing you to run from danger or sneak past potential enemies — don't worry, it's relatively easy, well-implemented stealth. The handful of solo moments effectively played off of the attachment I developed to Clementine last season, even as I was given control over her dialogue and actions.

Though the core gameplay of The Walking Dead hasn't changed one iota in Season 2 — you're still exploring small areas, examining items, talking to people and solving simple inventory puzzles — the technology backing it up seems to be a lot more stable.

The early PC build of "All That Remains" that I reviewed had no crashes or lock-ups, and the general flow of the game has been smoothed out significantly. Both action sequences and extended bits of dialogue played out with no random stutters when I made choices, an annoyance I had grown used to with the last season.

It's a necessary step forward for Telltale. Next I hope they improve their engine so that character animations look less awkward.

The best parts of "All That Remains" follow Clementine alone 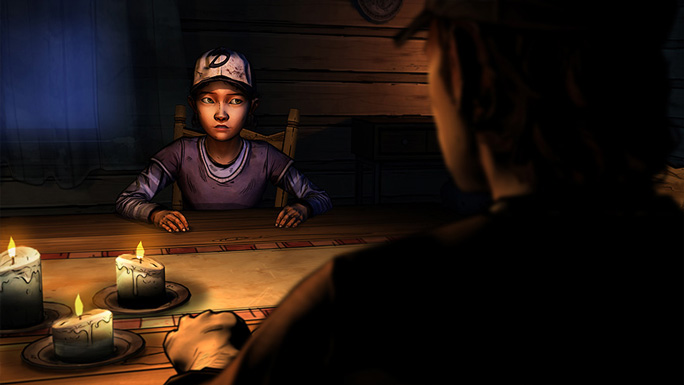 Telltale doesn't hold back on the gore or drama

Of course that also means paying off on the Walking Dead promise: Clementine goes through a lot of terrible shit here. I can think of at least three separate hyper-traumatic incidents in "All That Remains" that I wouldn't wish on my worst enemy, much less on a character I've come to think of almost as fondly as my own sisters. Even as the overall plot kind of meanders, Telltale doesn't hold back on the gore or drama, both of which are nearly as brutal as the final act of Season 1.

These moments work well enough; my only concern is that they might be desensitizing me to future episodes' struggles by going too far too fast. The Walking Dead Season 1 was dark from the beginning, but by the time it became really horrific for Lee and Clementine, the series had earned it. I'm not sure how Telltale can increase the intensity from some of the awful stuff that happens in this episode.

The shortcomings of this first episode of The Walking Dead Season 2 may not be that big of a deal in the long term. Telltale has four more episodes to torture Clementine, play with my heartstrings and make a whole new group of survivors matter. I'm entirely hopeful that they'll pull it off. But as of right now, all on its own, "All That Remains" is an entertaining piece of interactive fiction that will have to do a lot of heavy lifting to live up to its forebear.