Jonathan Blow experimenting with virtual reality support for The Witness

Share All sharing options for: Jonathan Blow experimenting with virtual reality support for The Witness

Earlier today, Blow posted a pair of screenshots on the game's official website, named "vr1" and "vr2," showing two different doorways within The Witness. The header for Blow's post simply reads, "What could it mean??" Blow confirmed that the screenshots were taken through virtual reality rendering and that his studio has been "doing some research in that direction."

"We want to support VR really well with this game — because The Witness is a game that is about exploring a space at your own speed, and walking around and looking at things, and not worrying about getting your face bitten off by a monster," Blow said. "It seems to be a lot more suited to VR than many other kinds of games. A first-person shooter, for example, probably doesn't work very well, because you move way too fast and the controls are designed for very fast action with very limited expressivity, but with a VR device you have a lot more expressivity in your motion."

Blow added that he hopes to share more details on the feature in the coming months. When asked if the screenshots were testing Oculus Rift support, Blow said that while he backed the Kickstarter campaign for the device, he believes the hardware has room to grow.

"I understand that a lot of gamers out there are excited for this device, and I also maintain some cautious optimism, but I am hoping that by the time they bring it all the way to the final product, they will have built it into a device that creates a stronger VR experience," he said. "I think there is a little bit of a danger of coming to the public with a device that doesn't quite do enough, getting people excited about VR and hyping it up, only to leave them disappointed. But I don't know what Oculus' plans are for the final device; I have never spoken to them directly, I am just a Kickstarter backer. So it could be that the final product will be great, and if it is then we will support it."

Earlier this summer, rumors began circulating that Sony was set to debut is own virtual reality headset compatible with the PlayStation 4. The hardware was rumored to make an appearance at Gamescom and the Tokyo Game Show, but no such headset was shown at either show.

The Witness is set to launch as a timed PlayStation 4 exclusive next year and later on Windows PC. 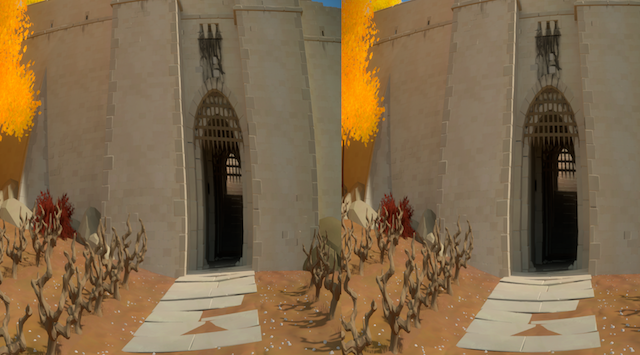