Why game developers are joining mass demonstrations in Ukraine

Share All sharing options for: Why game developers are joining mass demonstrations in Ukraine

Andrew Prokhorov is one of Ukraine's most influential game designers. He is the head of 4A Games, best known for its well-regarded shooting game Metro: Last Light.

For the last few days, Prokhorov (pictured with 4A colleagues earlier today, he is second from left) has been among the hundreds of thousands of protesters in Kiev's Independence Square, seeking to defy their government's rejection of a closer integration with the European Union. He has been joined by many of Ukraine's game developers.

Prokhorov has been attending the protests along with workmates from 4A Games and other games companies in Kiev. He has been using social media and texts to mobilize his network of contacts, many of whom are already committed to making their views heard.

"I just posted information on my Facebook page, that I am going to the city center and anyone is welcome to join," he told Polygon. "Also I called my friends and acquaintances. Many of them have already made a decision to go."

Many Ukrainians, most especially the young, have made their way to the square this week to protest against Ukrainian president Viktor F. Yanukovich's refusal to sign trade accords with the EU, under threat of severe trade penalties from Russia, which is hostile to any loss of influence over its former Soviet Union satellites.

Prokhorov and many of his compatriots are uniting to voice their frustration with a government that they believe is impeding their hopes for the future. He said he wants to live in a country that is friendly to an innovative, creative industry like gaming, one that is trusted by outside investors.

Protesters say that efforts to free the country from corruption since the Orange Revolution nine years ago, have achieved little. Former prime minister Yulia Tymoshenko, a political rival to Viktor Yanukovich, is currently serving a prison sentence, convicted of various corruption charges that many outsider observers view as politically motivated.

"People want to move towards European values, especially the younger generation," said Prokhorov. "The government aims for the quickest way to fill up their wallets. There is no place for our corruptionists in Europe. I come out to say 'Yes to Europe.'" 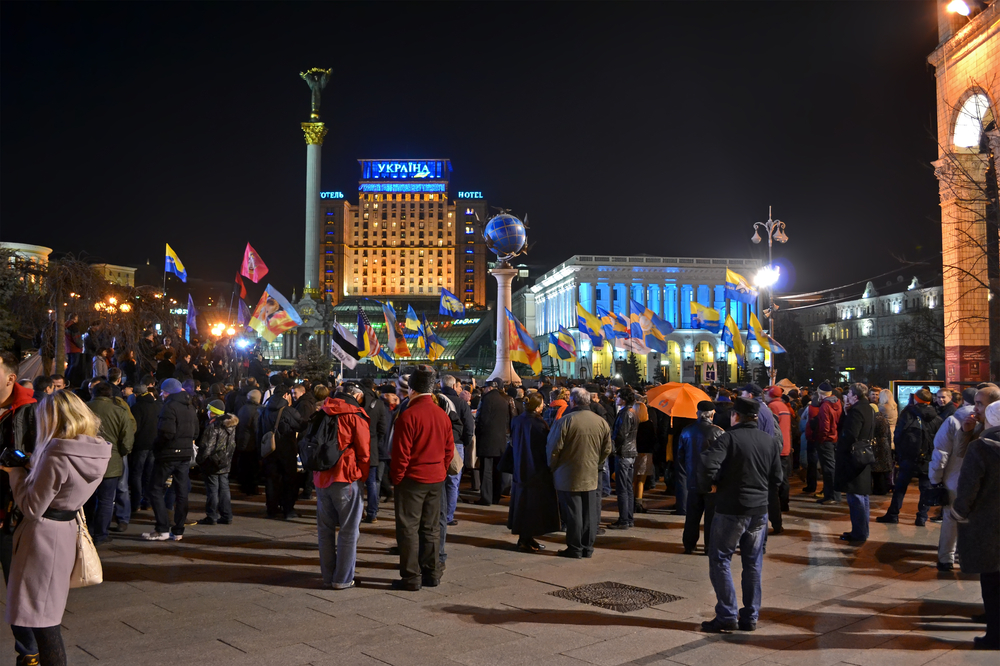 Sergey Galyonkin is director of marketing at Nival, a Russian games publisher with an office in Kiev. He describes himself as "a moderate" who wants to see a negotiated settlement to the current crisis.

"A lot of game developers are angry. We are a young people industry," he said. "A lot of people I know are at the protests and even if I don't agree with them on everything, I respect their choice. People here are arriving at work late or leaving early so they can help out [at the protests]."

He said that some of his workmates reported seeing other game developers during the protests, and that some even agreed to meet each other afterwards to talk about collaborating on new gaming projects. Even during street protests, it seems, game design conversations are going on.

Galyonkin said that government interference is stifling innovation in Kiev. "We have some small teams who make amazing games but we don't have this culture of entrepreneurialism. It is unusual for people to start a new company because there is a lot of paperwork to just get established," he said.

"I know some guys who just think it is easier to move their whole company abroad than to stay and deal with the headaches. People start here in local offices and then they are hired to go to Melbourne or Montreal or Paris. It's the government's fault. We have an awesome climate, nice people, and our health care system is not half as bad as America. Wages for game developers are quite high."

Prokhorov is clearly angry with his government's record of cronyism and corruption, which he said damages Ukraine's ability to gain trust in the international business community. "With more European integration any contracts between local developers and western publishers would be much easier to strike up," he said, adding that this would offer the added benefit of making it "less risky to invest money here."

Although the protests have been largely peaceful, crackdowns by police have caused widespread outrage. Prokhorov, whose Metro: Last Light game is set in a post-apocalyptic underground train network riven by political factions, said that he had only seen peaceful demonstrations. "The things I saw in the city center were stunning, hundreds of thousands people, again as in 2004, if not more. People of all ages and incomes, with mostly everyone having absolutely peaceful mood. In general, there was an atmosphere of a festival."

Two Point Campus coming to console and PC in May