J.G. Quintel's love of video games almost overrode his passion for animation. So much so, that his path could have lead him to video game development, rather than going on to create the hit animated television series called Regular Show for the Cartoon Network.

Quintel's love of video games and animation developed in such tight parallels, spending his free time as a kid between the two activities, that choosing a future in either medium could "have gone either way," he told Polygon in a recent interview. Quintel ultimately chose a future in animation over video game development because of the unshackled freedom animation offered exploring stories, without having to worry about the interactive medium's distracting elements.

"I think the idea of trying to come up with mechanics of the game wasn't quite as appealing as coming up with stories," Quintel explained. "I grew up watching The Simpsons and Rocko's Modern Life and all of these animated cartoons that were really cool and had cool stories. And you'll go back to school the next day and quote the lines."

"I think the idea of trying to come up with mechanics of the game wasn't quite as appealing as coming up with stories."

Premiering late 2010, the Regular Show series centers on the misadventures of a blue jay named Mordecai and a raccoon named Rigby. Both friends are "slackers," working at a local park as groundskeepers. With the creator's childhood video game consumption having a greater impact on the animation than his current gaming intake, the series is riddled with retro video game references. Some episodes even focus solely on video games.

"As far as Regular Show goes, I really wanted to infuse a lot of what I remember liking about video games as a kid into the Regular Show," he said. "So you know like the different types of games, like the 8-bit games, and the graphics on the box. The artwork will be so beautiful, 'Oh, this is going to be so cool,' and then you play it and it doesn't look anything like it. We just put tons of that stuff into the show and I think that it translates to a lot of people who have the same experience." 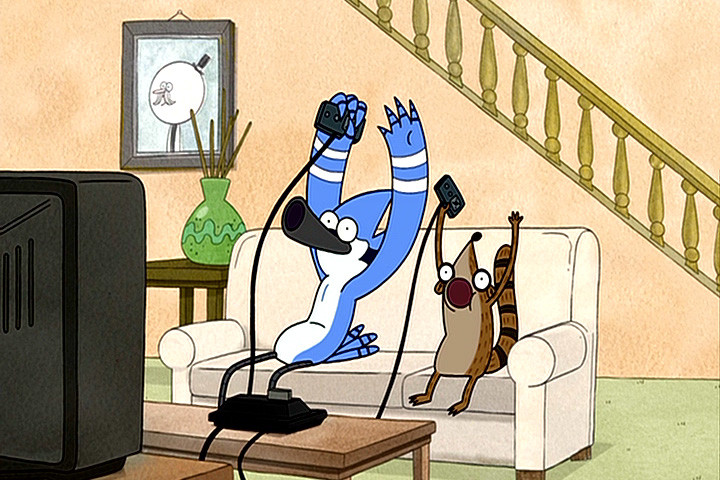 Receiving his first game system at Christmas as a kid, a Sega Master system, Quintel and his brother saturated themselves with video games. Mentioning Toejam and Earl as a particular nostalgic favorite, "It was the slacker game," Quintel experienced "a good taste" of classic titles growing up, such as Psycho Fox and Mario titles "because we had Sega and all of our friends had Nintendos."

"And my brother and I played that [Sega] all of the time. All that we wanted was to get new games and we just burned through them. And then we just followed through and just kept up with video games ever since."

The medium is so deeply ingrained into the series and with who the main characters are that it would be difficult to take video games out of the animated show without irreversibly harming it, Quintel said.

"To me, they are classic kids who are bored and they don't have anything to do and they are pretty much addicted to video games," he explained. "And that's my brother and I, and all of our friends. And that is all that we talked about, ‘When does the new game come out?' and then go and buy one. That was really exciting.

"Or you know, going to rent video games and beating them and talking about how hard they were and about the extra lives and continues. And I remember playing games that had no save points, and you had to beat it in one sitting, and that it was incredibly difficult." 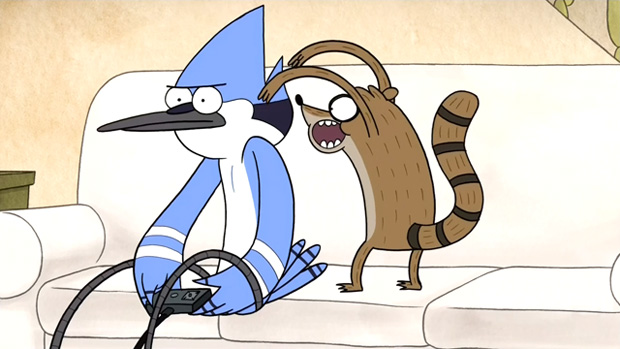 One particular episode of the show makes light of the ultimate old school rivalry of two players sharing the sole system in the household: Who gets to be player one? It resonated with the experiences many gamers had growing up with siblings, often fighting over a controller.

"Oh yeah, it is dead on that, especially if you know the game and you are good at it and you want to be player one because you don't want to sit and watch the other person play it for a really long time," Quintel said. "It will always be frustrating when if you died on an early stage and you had to give up the controller and you have to wait for your turn."

The animator explained that slipping the nostalgic retro gaming references into the series happens organically but he is adamant about not skimping out on representing the medium. For instance, if a storyboarder draws some generic version of "plugging in a thing" into a TV, he'll pull them up saying "No, no it has to be like this. It has to be specific. Try to make it look real."

"We had an episode where that even dealt with the back of the TV," he said. "Cause I can remember how that looked and how you had to hunt for that coaxial cable, before it went to the three jacks with the video and the audio cables, and it used to be a weird thing that you screwed into the back of the TV." 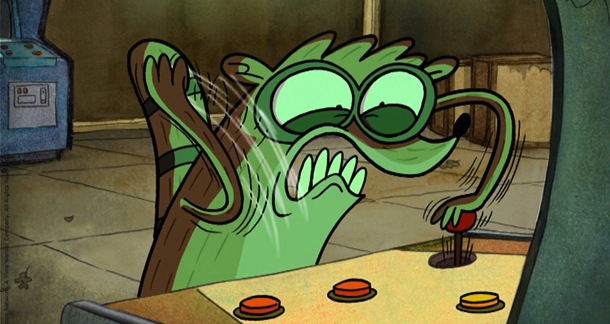 In developing Regular Show: Mordecai and Rigby in 8-Bit Land, Quintel got a taste of the career that he decided not to pursue. Based on the animated series, the WayForward Technologies-developed title was released for the Nintendo 3DS on Oct. 29.

The animator worked closely with the Regular Show: Mordecai and Rigby in 8-Bit Land's development team, workshopping what could be incorporated into the title. Like the series, Quintel wanted the retro gaming influences that had such a big impact on his childhood included into the game. As a result, the 3DS game was a call back to 8-bit games, working in the different aspects of gaming that the team remembered.

"And for the first time, I got to kind of look through and talk about all of my favorite things from old games to try and put into the Regular Show game and stuff that would work with the characters," he said. "And it was fun to work with them and realize that some ideas are too much. I'll be like, 'Well, we can't do that, but how about we do this? And how many levels can we put in? How they are going to look?' It was neat."

"I got to look at level maps where they would be just all laid out, printed out on paper and talk about kind of stuff we can fit in: What type of enemies would there be? What do those enemies do? How do they attack you? How do you kill them? How many hits?" Quintel said. "And just working out all of those mechanics — are there continues? Where are the save points? — it was really neat to see that for every game, someone has to decide what all of those things are going to be."

Quintel wanted the Regular Show 3DS game to be a platformer as the genre was his favorite, mixing it in with his other coveted genres such as space fighter games like R-Type and others like four-player Gauntlet on the arcade cabinet.

"I'll love to do something for the console, so it will have the graphics power to do whatever we could think of"

"Then I kind of figured out was there a way where I could kind of combine all of those aspects, so you could hop in between all of those different types of gaming experiences to work your way through the levels." he said. "It was fun to make it, but you know, story-wise it was very, 'Oh they got sucked into a video game and they have to play their way out.' And to see them sucked into the video game, into all types of games rolled together into one, it was a little challenge to see how it works."

Quintel said that as it was the first Regular Show game they got to do, it "was a really simple platformer," which had limitations. If he gets to develop another game based on the series, he wants to do something a lot more creative incorporating two player gameplay.

"I wanted to make a two-player cooperative game because those games you can play and work together to beat the game," he said. "But it was a lot harder to program something like that, it was just out the scope for the first game. So I'm really hoping we'll get to make another one because I'll love to do something for the console, so it will have the graphics power to do whatever we could think of. It will be awesome to take 2D and 3D elements and mix them altogether and try to make something really cool."

Rainbow Six Siege is getting a Yakuza crossover this season