A survey sent out to World of Warcraft to "past and current" subscribers questions players' interest in a new annual pass program, character upgrades and more.

World of Warcraft's annual pass program awarded bonus items and benefits — like a free copy of Diablo 3 — to those who invested in a year-long subscription. The survey asks if players would be interested in joining a new program. Other questions inquire how likely players are to purchase the game's upcoming expansion, Warlords of Draenor, at several price points. Those potential scenarios include a $39 or $49 price for the expansion with a free level 90 upgrade, and a $39 price that does not include the upgrade.

The survey also alludes that the character upgrade might be available to purchase on its own. 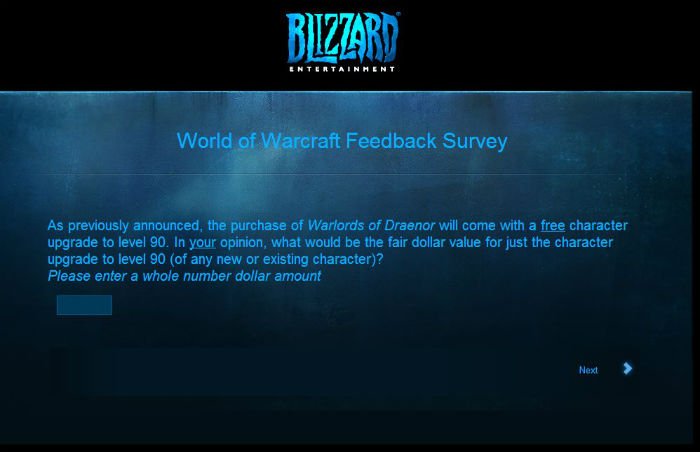 Warlords of Draenor was announced in November during BlizzCon 2013. The expansion will add the world of Draenor, updated character models and animations, and raise the game's level cap to 100.

Wario’s shoes are the window to his soul

How I learned to love Outer Wilds’ time loop

Dead by Daylight’s next survivor is a witch, my new best friend

The Last Graduate fills the Harry Potter void, and so much more