During the first two weeks of December, Best Buy is running a large-scale gaming tournament for Madden NFL 25. Known as the Ultimate Gamers Showdown, the competition is taking place inside Best Buy stores located in eight cities across America.

But for both the retail giant and the tournament's participants, the in-store part of the equation isn't necessarily the point of the exercise.

Earlier this week, we attended the first of the eight qualifiers for the tournament, which was held at the Best Buy in Manhattan's Union Square. Each event consists of a single-elimination bracket for up to 64 individuals, and the New York tournament was packed: The games were being played on the second floor, but we could hear the emcee and the players as soon as we walked in.

The store's employees had set up eight kiosks running Madden 25 on PlayStation 4 — the Ultimate Gamers Showdown is exclusively using that version of the game. Next to the console area was a stage that hosted the emcee, and later, an autograph session with New York Giants running back Brandon Jacobs.

The early games were relatively quiet except for the occasional celebratory whoop or frustrated sigh, at which points the host would draw attention to the matchup that had produced the sound. But as the bracket was gradually winnowed to the finalists, a sizable group of spectators began to form. The crowd peaked when Jacobs (below left) was introduced and then brought over to a kiosk so he could play against one of the store's employees, a young man named Ernesto (below right), for a few minutes. 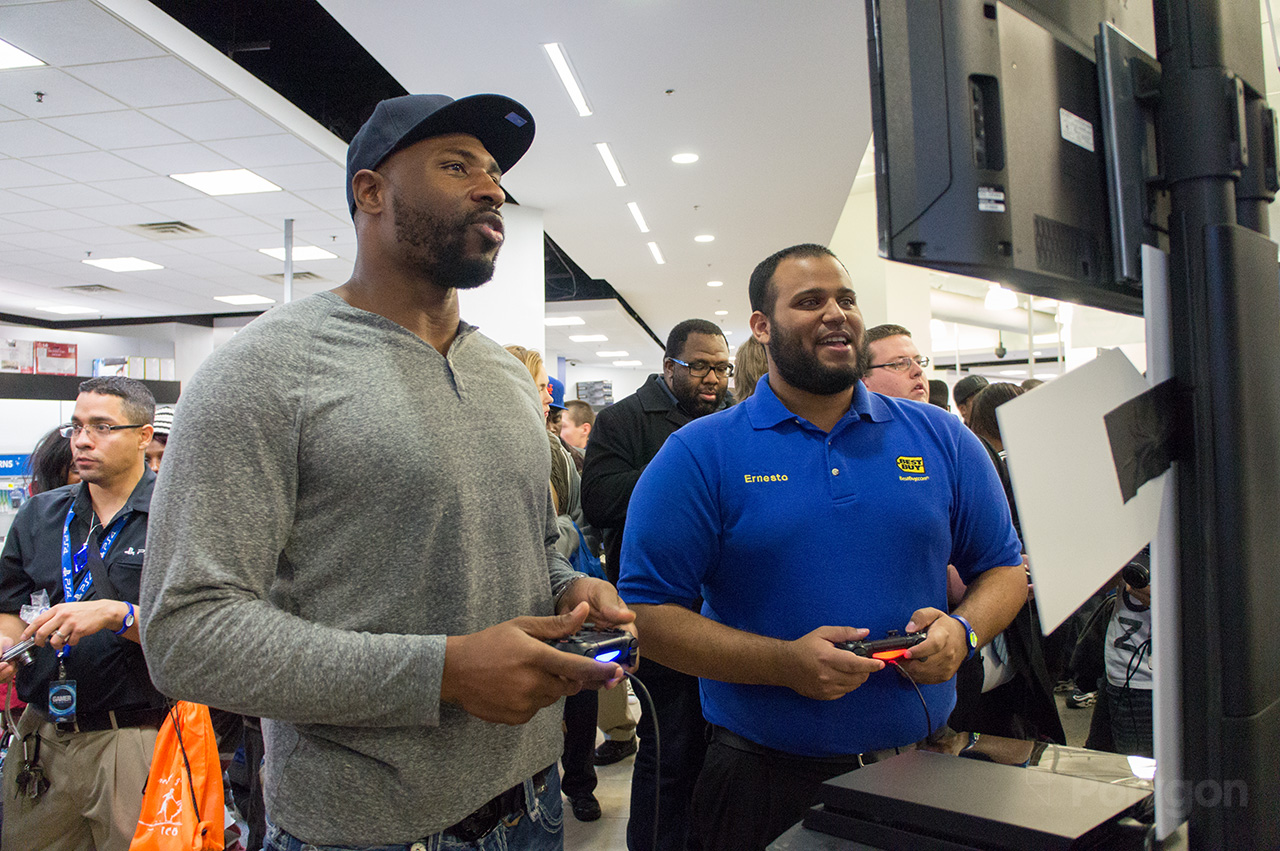 The winner of that night's tournament would receive a $1,000 Best Buy gift card, a terrific reward in and of itself for a few hours' worth of Madden time. That wasn't the only thing on the line, though — every one of the players had their eyes on a much bigger prize. Each of the eight qualifiers takes place at a Best Buy, but the grand prize in the Ultimate Gamers Showdown plays out at a place that could swallow every single one of those stores combined, many times over.

In addition to the aforementioned gift card, all eight regional winners — the other qualifiers are in San Francisco, Boston, Los Angeles, Detroit, Chicago, Atlanta and Minneapolis — earn a trip to the Ultimate Gamers Showdown's final round, which will be held Dec. 16 in Dallas. The finals won't go down at a Best Buy store, though; instead, they'll take place inside AT&T Stadium in Arlington, Texas, the home of the Dallas Cowboys.

And while those eight individuals will be competing for a financial prize, a $1,500 Best Buy gift card, the real reward for making it that far in the tournament is getting to play Maddden 25 on the stadium's gigantic video board. At 160 feet by 72 feet for the two sideline screens, and 51 feet by 29 feet for the two end zone screens, it's one of the largest high-definition displays in the world.

"The ultimate hook [of] playing that final at the Dallas Cowboys stadium is pretty exciting and pretty unique," said Chris Koller, vice president of entertainment for Best Buy, in a phone interview with Polygon this week. "We put some different ideas up, and this one just kind of rose to the top as kind of a sweet spot of all the different things we're trying to accomplish."

According to Koller, Best Buy created the Ultimate Gamers Showdown as a way to cap off the launches of the PS4 and Xbox One, and celebrate gaming competition and culture in the process. The tournament will certainly bring Madden players into Best Buy stores around the country. But when asked if it was intended to reassert the importance of Best Buy's retail environment at the start of this new console generation — which already has a heavy focus on digital distribution — Koller told Polygon that Best Buy's philosophy is to adapt with gamers instead of trying to prevent them from going digital.

"So I think that's more important for us than to try to change behavior; just be the best we can be, and we think the customers will meet us there."